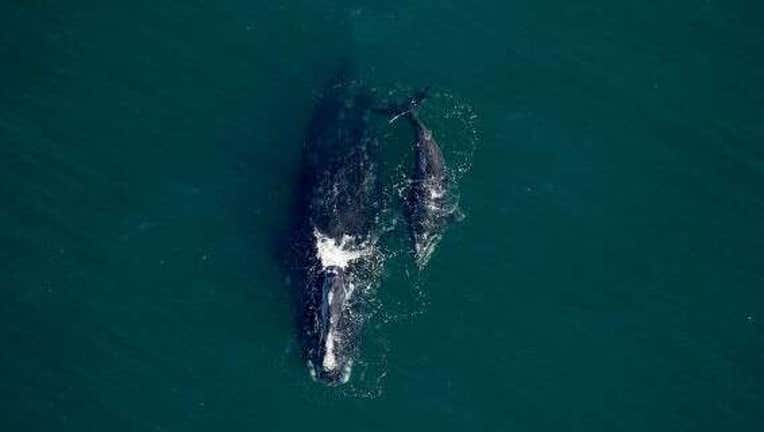 TALLAHASSEE, Fla. - The plight of endangered right whales took another sad turn Saturday, when a baby whale, possibly two months old, washed ashore dead on a Florida beach with telltale signs of being struck by a boat.

There are fewer than 400 North Atlantic right whales remaining, and any mortality of the species is a serious setback to rescuing the animals from extinction, according to federal biologists who expressed dismay over Saturday’s discovery of the 22-foot (7-meter) male infant at Anastasia State Park near St. Augustine.

"This is a very sad event," said Blair Mase, a whale expert with the National Oceanic and Atmospheric Administration.

"Every mortality that occurs really has a devastating impact on the population as a whole, because they are one of our most critically endangered whales in the world," she said. "Every whale counts."

The infant whale is believed to be the first born of a 19-year-old whale biologist named "Infinity." Both were sighted off Amelia Island in northern Florida on Jan. 17.

The circumstances surrounding the whale’s death are under investigation. But federal officials said it was clear that a vessel was involved. The whale suffered propeller wounds to the head and back.

Inclement weather kept biologists from immediately launching a search for the calf’s mother to see if she might have also been injured by the collision with a boat.

It was the second calf mortality since the calving season. Another calf was found dead in November on one of North Carolina’s barrier islands.

From November to April, right whales swim south from the frigid northern Atlantic to give birth in warmer waters off the northern coast of Florida.

The whales spend those months cruising through waters off the coast, sometimes coming within a couple of hundred feet from beaches — which make them vulnerable to boaters and fishing vessels going in and out piers.

Mase said some 40 right whales have been sighted off the southeast coast of the United States, with 15 pairs of moms and their calves.

Federal laws prohibit people from harming the animals. And people are supposed to remain at least 500 yards (460 meters) away from the whales.

"If you’re in this area, please give these animals space," said Allison Garrett, a NOAA spokesperson. "The rule is 500 yards — that’s five football fields. That includes people, boats, drones, paddleboards — everything. That’s the law."

Garrett urged people who come upon one of the rare whales to report the sighting to officials at (877) 942-5343 to help track their numbers.

Ocean vessels and fishing operations — as well as disease — have taken a toll on the whale’s numbers.

Since 2017, the animals have been experiencing what biologists call an "unusual mortality event." In those years, at least 33 dead and 13 seriously injured whales have been found — accounting for more than a tenth of the remaining population.

Last month, conservation groups sued the federal government to force it to further accelerate action on proposals meant to protect the whales.

The groups want the government to impose stricter speed limit on ships traveling from Maine to Florida.