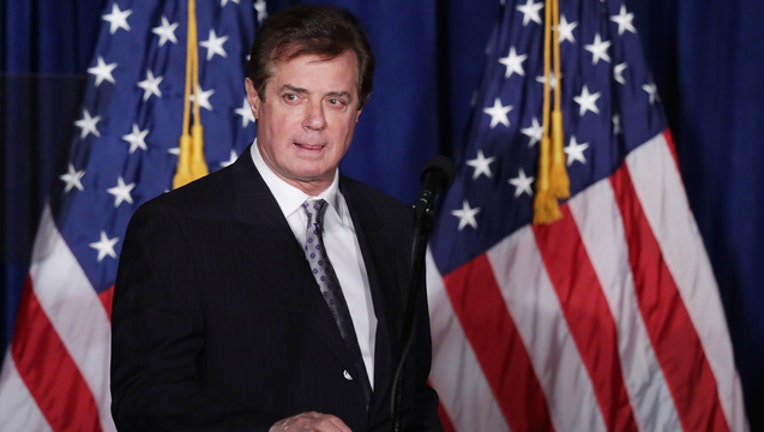 WASHINGTON - (AP) -- FBI agents have searched one of the homes of President Donald Trump's former campaign chairman, Paul Manafort, whose past foreign political work has been swept into the investigations into Russian interference in the 2016 election. A Manafort spokesman confirmed the search Wednesday.

Manafort spokesman Jason Maloni said in a statement that FBI agents had obtained a warrant and searched one of Manafort's homes, but he would not say when the search occurred.

The Washington Post, which first reported the raid, said agents working with Special Counsel Robert Mueller conducted the search the morning of July 26 at Manafort's home in Alexandria, Va.

"Mr. Manafort has consistently cooperated with law enforcement and other serious inquiries and did so on this occasion as well," Maloni said.

Manafort has been a subject of a longstanding FBI investigation into his dealings in Ukraine and work for the country's former president, Viktor Yanukovych.

That investigation has been incorporated into the probe led by Mueller, who is also scrutinizing Manafort's role in the Trump campaign as he looks into Russia's meddling in the 2016 election and any possible collusion with Trump associates.

Manafort, who led the Trump campaign for several months, has denied any wrongdoing. He also spoke behind closed doors to Senate investigators for an interview just one day before the search of his home.

The use of a search warrant shows law enforcement officials have convinced a judge there is probable cause to believe a crime may have been committed.

Word of the raid is the latest revelation about Mueller's investigation, which had been operating in relative secrecy compared with numerous congressional probes looking at the election.

In recent days, it's become clear the former FBI director is using a grand jury in Washington in addition to one in the Eastern District of Virginia, where investigators also have been looking into former Trump national security adviser Michael Flynn.

Also, FBI agents have been asking witnesses since the spring about $530,000 worth of lobbying and investigative work carried out by Flynn's firm, Flynn Intel Group, according to a person familiar with the investigation.

That work sought the extradition of an exiled Turkish cleric living in the U.S.  Through his attorney, Flynn has declined to comment on the investigation.

The person, who spoke on condition of anonymity to discuss the sensitive details of the investigation, said FBI agents have also been asking about Flynn's business partner, Bijan Kian, who served on the Trump presidential transition. Kian has not responded to multiple attempts to contact him over several months.

In recent months, Flynn and Manafort have turned over documents to congressional committees investigating the election interference.

One focus of the multiple probes is a June 2016 meeting Manafort attended with Trump's son-in-law, Jared Kushner, and Donald Trump Jr.

That meeting, held at Trump Tower in New York, was described to Trump Jr. in emails as part of a Russian government effort to help the Trump campaign by passing along information that could be used against Democrat Hillary Clinton.

During his Senate intelligence committee interview , Manafort provided his recollection of the Trump Tower meeting and turned over contemporaneous notes he took during the gathering. The interview was confined to that meeting.

Manafort has also turned over other documents to the Senate intelligence committee as well as about 400 pages of records to the Senate Judiciary Committee.

Meanwhile, the Judiciary Committee said Wednesday it has also received about 250 pages of documents from Trump Jr. and about 20,000 pages from the Trump campaign.

The content of the documents was not immediately clear. The committee said it received the Manafort and Trump campaign documents on Aug. 2 and the records from Trump Jr. on Aug. 4.

Judiciary committee leaders have also been in talks with Trump Jr. and Manafort about private interviews. The committee initially called for them to testify publicly, but lawmakers have since said they were negotiating the terms of their appearances.