Continuing his administration’s campaign against critical race theory, Florida Gov. Ron DeSantis on Wednesday teased legislation that he said would, in part, allow parents to sue schools that teach the theory.

TALLAHASSEE, Fla. - Calling the state’s approach "positively dystopian," a federal judge on Thursday blocked a Florida law championed by Gov. Ron DeSantis that restricts the way race-related concepts can be taught in universities.

The law is "antithetical to academic freedom and has cast a leaden pall of orthodoxy over Florida’s state universities," Chief U.S. District Judge Mark Walker wrote in the 139-page ruling.

"Neither the state of Florida’s authority to regulate public school curriculum, nor its interest in preventing race or sex discrimination can support its weight. Nor does the First Amendment tolerate it," he added.

DeSantis’ administration quickly said it will appeal the ruling.

The law, which DeSantis dubbed the "Stop Wrongs To Our Kids and Employees Act," or "Stop WOKE Act," lists a series of race-related concepts and says it would constitute discrimination if students are subjected to instruction that "espouses, promotes, advances, inculcates or compels" them to believe the concepts. The Republican-controlled Legislature passed the law this year.

A federal judge is hearing arguments from businesses regarding the new restrictions on race and gender-related workplace training. They say it's a violation of their First Amendment rights.

Faculty members who violate the law, which has sparked several legal challenges, could be fired, and a "substantiated violation" of the restrictions would make schools ineligible for what is known as performance funding.

Walker’s ruling, which granted a preliminary injunction against the law, came in two lawsuits filed by professors and students from several state universities. The plaintiffs argued that the restrictions are causing confusion for instructors, are having a chilling effect on speech inside classrooms and are an unconstitutional infringement of professors’ First Amendment rights.

"Having balanced the context, the state’s asserted interest, and the strong predilection for academic freedom in the context of these cases, this court concludes that the state of Florida, as an employer and educator, cannot restrict university employees from expressing a disfavored viewpoint about a matter within the established curriculum while instructing on that curriculum," Walker wrote, adding that "such viewpoint discrimination ‘is poison to a free society.’"

But DeSantis spokesman Bryan Griffin said in a statement that the administration expects "ultimately to prevail in this litigation." 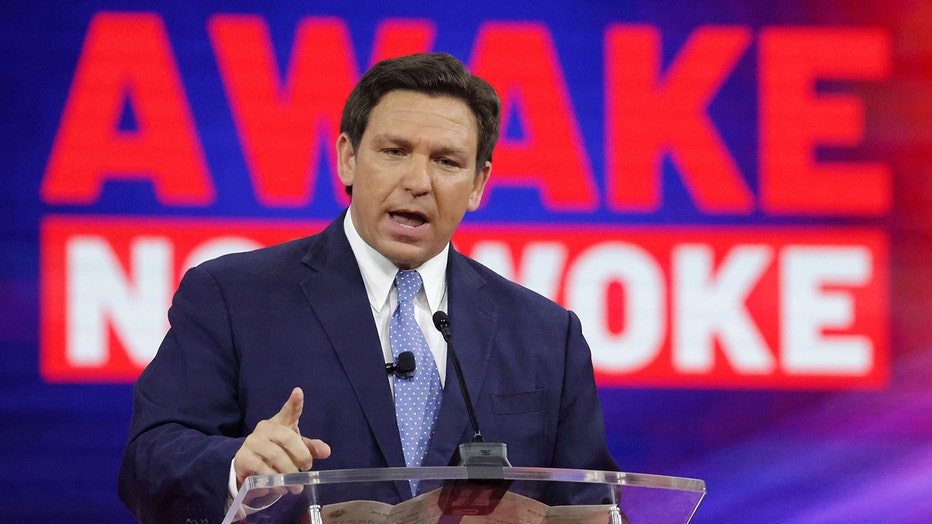 "We strongly disagree with Judge Walker’s preliminary injunction orders on the enforcement of the Stop WOKE Act and will continue to fight to prevent Florida’s students and employees from being subjected to discriminatory classroom instruction or mandated discriminatory workplace training," Griffin said in the statement. "The Stop WOKE Act protects the open exchange of ideas by prohibiting teachers or employers who hold agency over others from forcing discriminatory concepts on students as part of classroom instruction or on employees as a condition of maintaining employment. An ‘open-minded and critical’ environment necessitates that one is free from discrimination."

But plaintiffs and their lawyers hailed Walker’s decision.

"I hope that the courts will defend the existence of a public education that cannot be manipulated by politicians to push any ideology, now and in the future," Adriana Novoa, a University of South Florida history professor who is a plaintiff, said in a statement.

Campuses "are spaces for debate, not dogma," Greg H. Greubel, an attorney with the free-speech advocacy group Foundation for Individual Rights who represents some of the plaintiffs, said in a prepared statement.

"Americans recognize that the government cannot be an all-powerful force permitted to control every word uttered by a professor in the classroom. Today’s ruling is an important first step in ensuring that professors’ First Amendment rights are respected by the state of Florida," he said.

Lawyers for the state university system’s Board of Governors and other education officials who are defendants in the case have maintained that the government has the authority to restrict public employees’ speech.

"Nonetheless, such limitations must be both reasonable and supported by evidence of a sufficiently weighty interest to overcome the employee’s right to speak," the judge wrote, adding that the law’s restrictions are "certainly not reasonable."

Giving the state such control would have dire consequences, Walker wrote.

"Striking at the heart of ‘open-mindedness and critical inquiry,’ the state of Florida has taken over the ‘marketplace of ideas’ to suppress disfavored viewpoints and limit where professors may shine their light on eight specific ideas. And defendants’ argument permits zero restraint on the state of Florida’s power to expand its limitation on viewpoints to any idea it chooses," he added.

During oral arguments last month, Charles Cooper, an attorney for the state, told Walker that the concepts targeted in the law, formally called the "Individual Freedom Act," are "racially discriminatory and repugnant."

"We are not going to permit" those concepts to be espoused by instructors "in our classrooms, on our time … accepting our paychecks," Cooper argued on Oct. 13.

Walker made several references to the author George Orwell in Thursday’s ruling, using a quote from "1984" to open his opinion.

"’It was a bright cold day in April, and the clocks were striking thirteen,’ and the powers in charge of Florida’s public university system have declared the state has unfettered authority to muzzle its professors in the name of ‘freedom,’" Walker wrote.

The state "lays the cornerstone of its own Ministry of Truth under the guise of the Individual Freedom Act, declaring which viewpoints shall be orthodox and which shall be verboten in its university classrooms," he also wrote.

The law, for example, would deem instruction discriminatory if it "compels" students to believe that they "must feel guilt, anguish, or other forms of psychological distress because of actions, in which the person played no part," committed in the past by members of the same race or sex.

But Walker warned that "both robust intellectual inquiry and democracy require light to thrive."

"Our professors are critical to a healthy democracy, and the state of Florida’s decision to choose which viewpoints are worthy of illumination and which must remain in the shadows has implications for us all," Walker wrote. "If our ‘priests of democracy’ are not allowed to shed light on challenging ideas, then democracy will die in darkness. But the First Amendment does not permit the state of Florida to muzzle its university professors, impose its own orthodoxy of viewpoints, and cast us all into the dark."

Walker’s ruling came two months after he issued an injunction in a separate lawsuit challenging a portion of the law that places restrictions on how race-related issues can be addressed in workforce training. DeSantis and Attorney General Ashley Moody have asked the Atlanta-based 11th U.S. Circuit Court of Appeals to toss out the injunction.