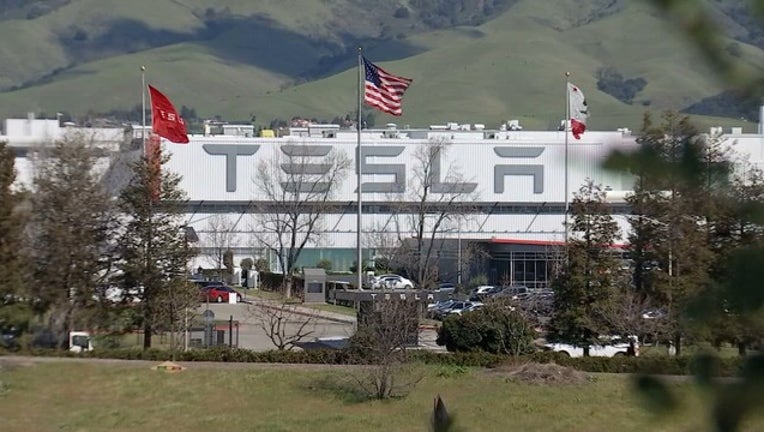 DETROIT (AP) - A Tesla Model S electric car that crashed and burned last month in Florida, killing two teenagers, was traveling 116 miles per hour three seconds before impact and only slowed to 86 mph as the air bags were inflated, according to federal investigators.

The National Transportation Safety Board, in a preliminary report on the crash, also said that the car missed a curve with a 25 mph speed limit, crashed into a wall twice, and witnesses reported that it erupted in flames.

The driver and front-seat passenger, both 18, were killed in the May 8 crash in Fort Lauderdale. A rear-seat passenger was ejected and injured.

According to the report released Tuesday, the car's lithium-ion battery re-ignited twice after firefighters extinguished the flames, once as the car was being loaded for removal from the scene and again in a storage yard. The NTSB had said previously that it did not expect the Tesla's semi-autonomous Autopilot system to be a part of the investigation.

It's the second time in two months that the agency has issued a preliminary report in a Tesla crash. On June 7 an agency report said that a Tesla Model X SUV using Autopilot accelerated just before crashing into a California freeway barrier in March, killing its driver.

In both cases, the agency will determine the cause and issue safety recommendations to prevent crashes from happening again. Normally it takes at least a year to finish a final report.

In the Fort Lauderdale crash, witnesses told investigators the driver went into the left lane to pass another vehicle and lost control while trying to return to the right lane. At the crash site on Seabreeze Boulevard, the road curves to the left, and there's a 25 mph warning sign with a flashing beacon.

Two seconds before impact, the Model S sedan was traveling 108 mph when the driver hit the brakes and increased the steering angle. The Tesla went over the curb, crossed the sidewalk and continued to the south, hitting a wall in front of a home, according to the report. When the car's computers gave the command to inflate the air bags, it was traveling 86 mph. The car continued to move and struck the wall a second time, when witnesses said it caught fire, according to the report.

It bounced back onto the road, went over a curb on the opposite side of the street, hit a light pole and stopped in a driveway, the report stated.

The NTSB, working with local police, found from data stored by the car's computers that both front-seat passengers were wearing seat belts.

Fort Lauderdale firefighters put out the flames with 200 to 300 gallons of water and foam. But as the car was being loaded for removal from the site, the battery reignited and was quickly extinguished. It also reignited at a storage yard, and firefighters had to be called.

In the California crash, the battery also reignited several times, drawing interest from the NTSB because of the car's new technology. The agency says it will continue to investigate the cause of the crash and the procedures used to put out fires and store the cars.

Batteries like those used by Tesla and other electric cars can catch fire and burn rapidly in a crash, although Tesla has maintained its vehicles catch fire far less often than those powered by gasoline.

A Tesla spokeswoman wouldn't comment on the report regarding the Florida crash. The company has said previously that its battery pack has thousands of cells that are placed in separate modules that have firewalls between them.

Federal authorities also are investigating two other Tesla crashes in California and Utah.

The NTSB normally makes recommendations to other federal agencies such as the National Highway Traffic Safety Administration, which has authority to impose regulations and seek recalls.