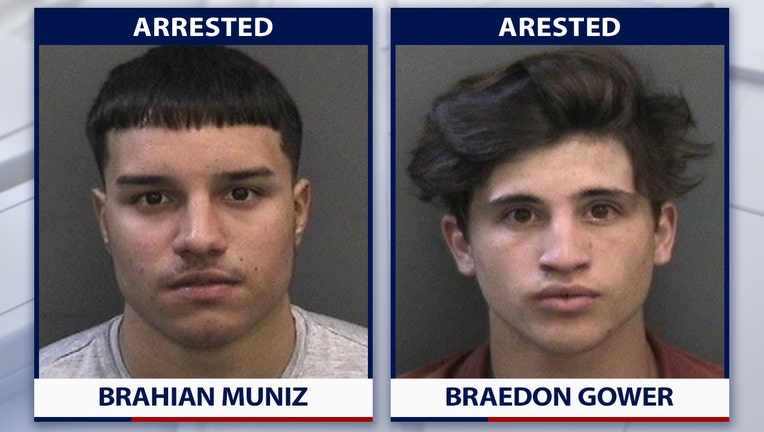 TAMPA, Fla. - Brahian Naguel Muniz, 18, and Braedon Gower, 18, were arrested early Saturday morning after a state trooper says they were traveling 100 miles per hour and racing each other along SR 60 shortly after midnight.

According to the Florida Highway Patrol, a trooper tried to stop the teens at the intersection of US 301 and SR 60 after he saw them racing, but they took off at a high rate of speed.

The trooper said when he caught up with the teens, Muniz was traveling 103 mph in a Dodge Charger and Gower was clocked at 100 mph in an Infinity. The speed limit in the area is 50 mph.

The trooper says he overshot the vehicles as they turned north onto Currie Davis Drive. When he overtook the cars again, the trooper says Muniz was peeling off and started to do a donut while Gower was sitting on his driver's side door with half his body out as the vehicle was traveling.

The trooper says he activated his emergency equipment to try to stop the vehicles, but they fled again. However, he was able to get the license tags of the cars. He then turned off his lights and sirens in an attempt to not endanger anyone else.

While Gower sped west on SR 60 and eventually turned north onto US 301, Muniz stopped abruptly at a red light. That’s when the trooper confirmed the license tag, blocked Muniz in and arrested him for racing, reckless driving and fleeing to elude.

Using the DMV system, the trooper was able to identify Gower as the other driver. The trooper went to Gower’s address, where his parents said they kicked him out of the house and didn’t know where he was at the moment. The trooper asked them to contact Gower and have him turn himself in.

According to FPH, Gower turned himself in at their Tampa location shortly after 2:30 a.m. He was arrested on charges of racing, reckless driving and fleeing to elude.