TAMPA, Fla. - The construction of an elevated bridge over Gandy Boulevard has been going on for nearly three years. The West Extension of the Selmon Expressway is now complete and will open to drivers Monday, April 19.

It is the final piece of the Selmon Expressway, a 1.9-mile roadway high above Gandy Boulevard. The West Extension will separate commuters from locals and should alleviate the congestion and rush-hour backups.

"You’re mixed in with a lot of travelers who have no destination here; it’s just the only route through this corridor to a destination somewhere else," explained Joe Waggoner, Executive Director for the Tampa Hillsborough Expressway Authority. "So what the expressway extension does here is it gives them a choice."

A trip on the West Extension will cost you $1.31, $.95 if you have SunPass. Riding right over all the stoplights on Gandy.

"That through traffic we estimate is about 40% of the trips that are in this corridor right now, so up to 40% of the traffic that’s out here today will up and out of the way," Waggoner said.

A major improvement for the area, and a welcome change for many of the local businesses. 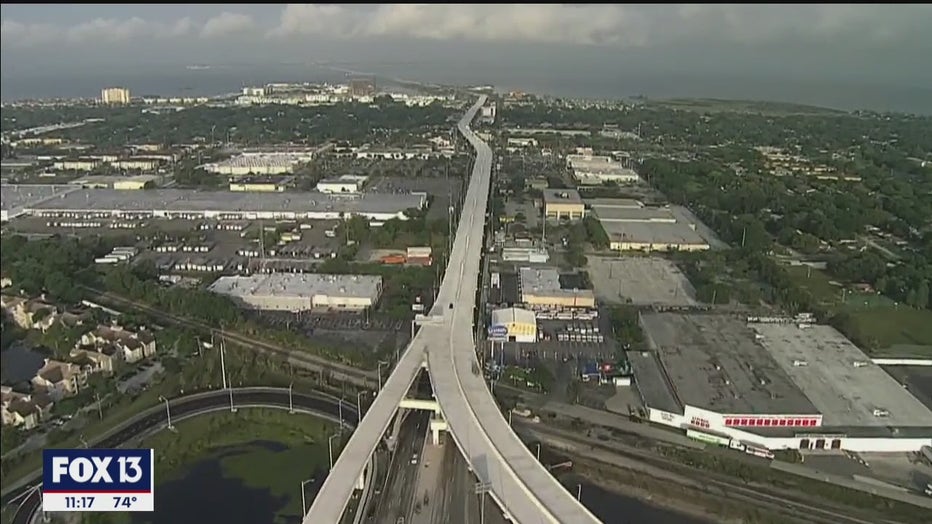 At Arthur Murray Dance Studio, students have had to struggle with construction and traffic the last 2.5-years making it tricky at times to get to the parking lot.

"I think it’s gonna be really nice to people to have easy access to these businesses along Gandy Boulevard, and for the people who just want to get where they’re going to be able to get there," said Arthur Murray Dance Studio Coordinator, Sarah Myrick.

The Selmon West Extension towers 30-feet high, which is about double the height of a typical bridge, done intentionally so there is no visual blockage between the businesses and neighborhoods on either side.

"So it’s an improvement for everyone whether you’re walking, biking or driving a vehicle," Waggoner said.

With a price tag of $230-million, it was designed to be visually appealing. Parts are painted cream and blue with an estuary pattern, LED lights that change color illuminate the piers, and decorative fins dot the top of the roadway. Those 27 concrete encasements house steel cables that help support the bridge.

"Our fins are in the median, so the cabling suspension is in the median and there’s nothing like that anywhere else in the United States," explained Waggoner.

The extension officially opens to drivers the afternoon of Monday, April 19.