NAPLES, Fla. - The four brush fires merged and grew into an 8,000-acre (3,237-hectare) fire in southwest Florida on Thursday, according to a tweet from the Florida Department of Agriculture & Consumer Services. The blaze was about 10% contained.

"They won't even know what their assignment is until they get down to Collier County," said Shawn Whited of Pasco Fire Rescue. "I imagine they will be doing structural protection and helping those already over-taxed units."

Some residents have refused to leave, making the response even tougher for crews. 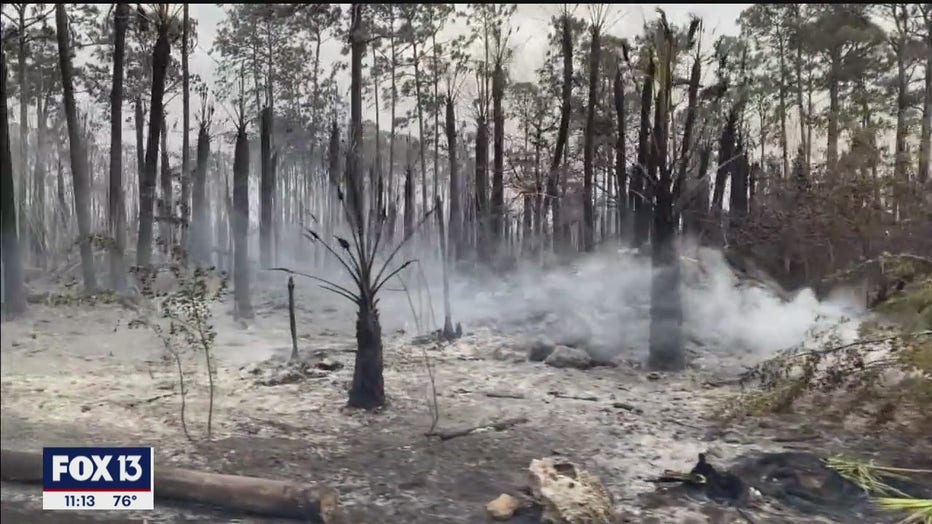 Agriculture Commissioner Nikki Fried begged them to listen to orders.

"Your life is worth more than your home. Please do not stay back and be your own hero and try to save your home. Let my men do their job," she said. "Don't be one of those that we have to come back and save."

Evacuation orders and road closures were issued for parts of Collier County, Florida, on May 13 and 14 as brush fires spread to cover 5,000 acres without containment.

The situation evolved quickly Wednesday as the four fires covered a total of about 400 acres (162 hectares), officials said at the time.

One of the fires threatened about 30 homes in the Collier County area of Golden Gate Estates, according to the Florida Forestry Service. Greater Naples Fire Rescue District Chief Kingman Schuldt told the Naples Daily News that the fires have since displaced several residents and damaged or destroyed structures.

The Greater Naples Fire Rescue District was already leading efforts to fight portions of the fires, along with two Lee County strike teams and one Sarasota County team.

The Collier County Sheriff’s Office and the Florida Fish and Wildlife Conservation Commission were coordinating voluntary evacuations Wednesday night, but officials moved on to mandatory evacuations by Thursday.

Meanwhile, the Florida Highway Patrol said on Twitter that troopers had reopened a section of Interstate 75 known as Alligator Alley. The toll road had been closed a day earlier after smoke caused visibility issues. The agency advised motorists should still proceed with caution. Alligator Alley extends from near Naples on Florida’s Gulf Coast, to Broward County in South Florida.

Fried said it could take two weeks to put this fire out. The state fire marshal will investigate a cause.

The Associated Press and FOX 13 News' Evan Axelbank contributed to this report.