Don’t be spooked, more sheepshead will show up during cooldown

Sheepshead action is picking up, especially behind the fronts where water is murky and stirred up. We should be seeing more of these guys showing up over the coming weeks with more aggressive feeding too, says Captain Dylan Hubbard over at Hubbard's Marina.

Red tide is still around in areas, but this is the most optimistic forecast for red tide I have seen since early 2021. Here is the latest forecast and levels from the USF and FWC collaborative efforts.

Redfish action has slowed a bit in our area, but many are still capitalizing on the good action in the early morning and overnight. The redfish are really loving those dock lights, bridge lights and areas where bait congregates at night. In the early morning, you can find them most actively feeding around those 2-4 feet areas along mangrove shorelines and on the flats. 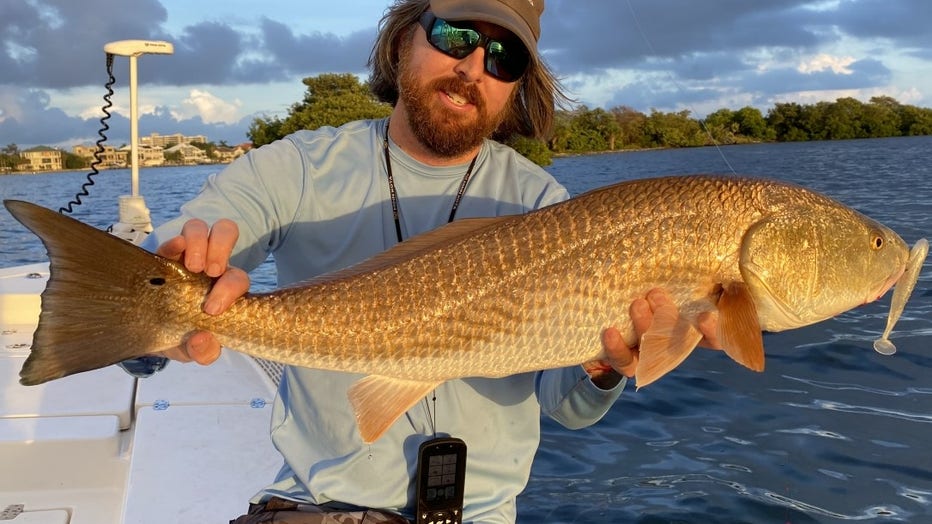 We are finding more of these fish grouped up during the early mornings and spreading out during the day. Finding mullet during the day is still a terrific way to find some big redfish on the flats.

Snook action is steady with the slot-sized and underfish regularly active around the flats when water is moving, and the bait is present. At night, like the redfish, dock lights and bridge lights are home to actively feeding snook at the right tidal time. Use the solunar to know when the snook will be most actively feeding in the area you are targeting. There are still a few fish on the beaches and in the passes, but these big fronts will push snook to the back bay waters. 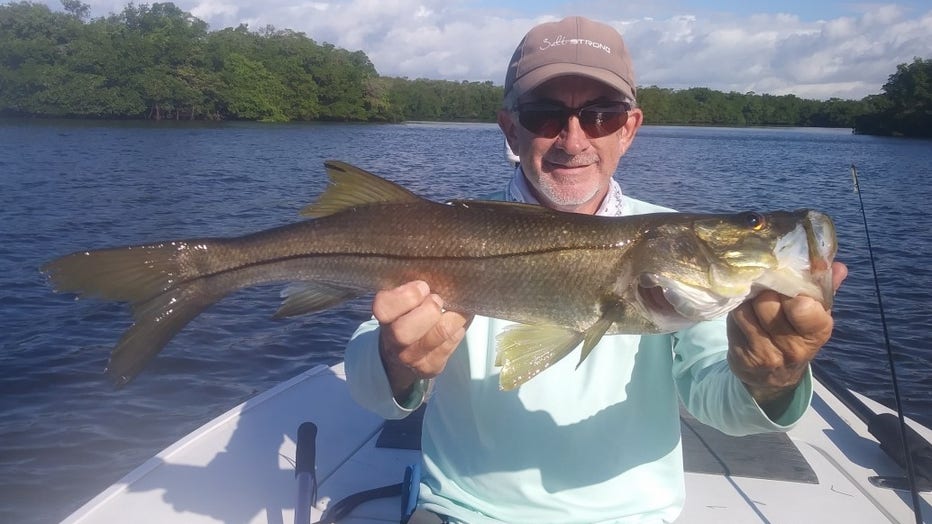 Trout action has been spotty, but when you find one, there is more in that area and depth. We are seeing more trout around that 2-5 foot zone as they start to move shallower. Also, the post-front action should be a little better with water temperatures starting to dip a bit more. We are coming up on that new moon which means more water moving and better tides to find the trout stacked up where they can find bait being pushed into their feeding areas on the backside of the flats. 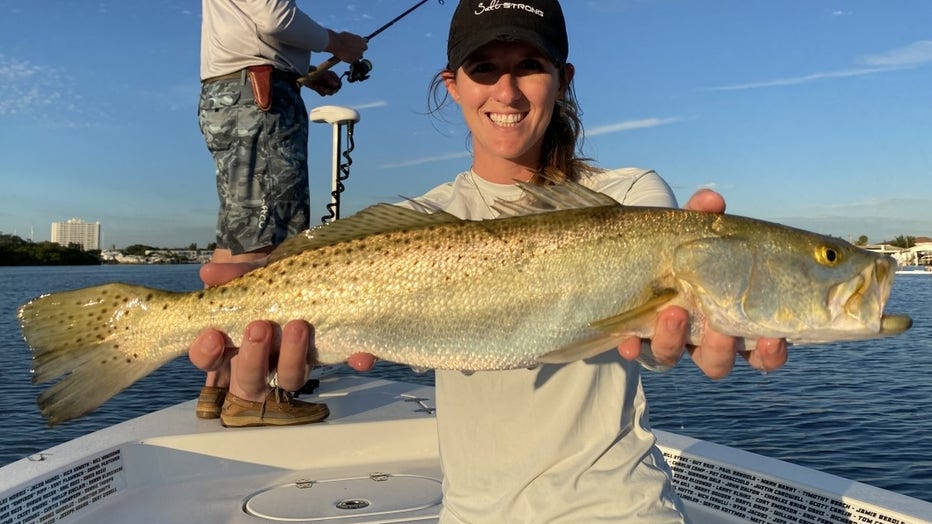 Sheepshead action is picking up, especially behind the fronts where water is murky and stirred up. The bridges, docks, piers, and jetties will be holding more and more actively feeding sheepshead. We should be seeing more of these guys showing up over the coming weeks with more aggressive feeding too. Using light tackle and minimal weight and small chunks of shrimp is a great approach to catching some nice sheepshead around local structures.

Triple tail very thick around the area right now, under floating debris, markers, and local buoys. There are plenty of buoys along the beaches thanks to all the stone crab traps and this makes for an easy cruise to find one hiding out under a buoy. Pass it and come back in stealth mode to present a live shrimp or soft plastic to these unique-looking but great eating fish.

Hogfish action has slowly started to pick up more and with the cooling temperatures. We should see that continue near shore around 30-70 feet of water. It is a wonderful time to get out there between the fronts and try for some good eating hogfish using live shrimp using around 30lb leader and a 3-4ot hook and a 1-2oz egg sinker rigged knocker rig style. 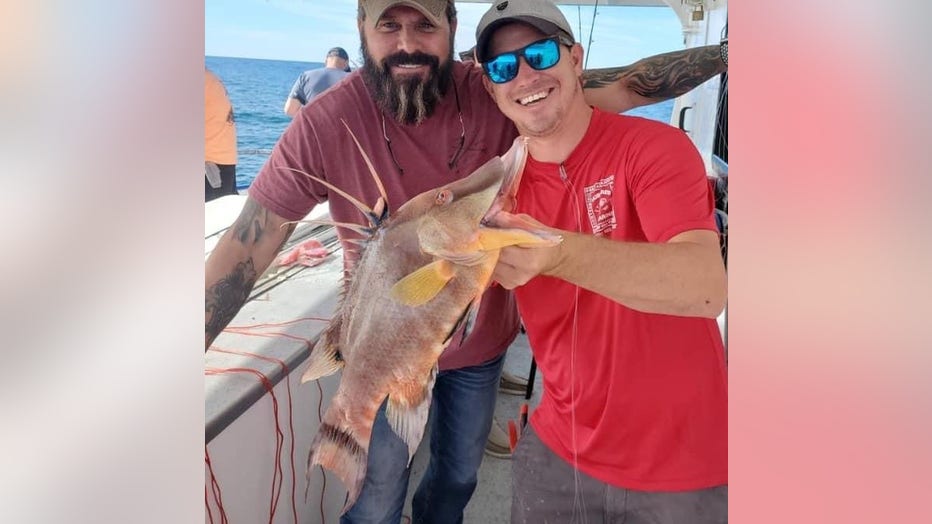 Or you can simply use a 1/2oz jig head. Live shrimp is definitely the most common bait to target hogfish, but they will eat fiddler crabs, rock shrimp and even sometimes other baits too. Find those smaller ledges or hardbottom areas with sea fans for a chance at targeting some hogfish near shore.

Mangrove snapper action near shore is going well too, but we have not seen massive concentrations. However, we are able to put together a few nice catches when we have anglers targeting them with that lighter leader and double snelled threadfin or sardine chunks or even live shrimp.

Scamp grouper have been biting surprisingly well in the deeper near shore waters around 70-90 feet of water. We are seeing these guys mostly while using threadfins or small strips of squid, but small live pinfish are a terrific way to target scamp grouper too.

Mackerel and kingfish are around near shore as well, but most have stayed off the beaches with the red tide in the area. With the red tide falling back, we are hoping to see a big push of these fish back to the shallower near shore waters. However, we shall see what time will tell!

The gag grouper bite remains steady offshore as we target the red snapper out deeper past 150 feet of water. We are seeing a majority of these guys on big, dead baits or the live baits with 80lb test and 7-8ot hooks.

The big gags take a lot of patience and a lot of determination. You have to really battle or get lucky to get a big one off the bottom without getting broke off or rocked up. Most of the time, we will see as many -- if not more -- broken off or rocked than actually landed. 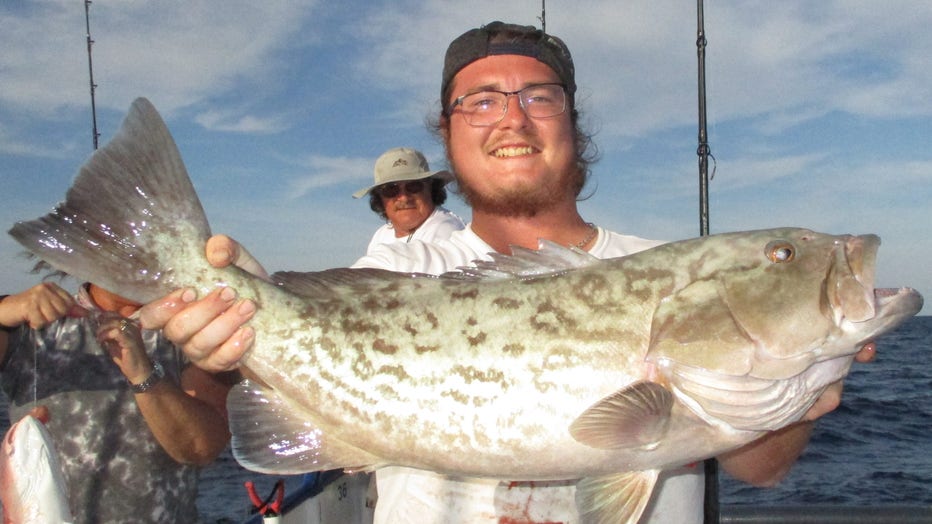 The trick is to be ready and put as many cranks on the reel as possible before lifting up hard and quickly lowering the rod tip while adding more cranks. Rapidly do this a few times before slowing down and finessing the fish the rest of the way to the boat.

The first 15-20 cranks is where the battle is won or lost and if you can get 20 cranks on the fish without him taking more drag in, you have got him up enough where you want to slow down and just take it easy on the stressed out leader, hook, and other tackle. Ease the fish the rest of the way to his new ice-filled home.

Scamp grouper are also biting extremely well for us out deep while targeting the red snapper and gag grouper past 150 feet of water and up to 300 feet of water. We are seeing many of these fish in the 8-12lb range which is really large for scamp grouper.

We are hoping to see this increased scamp grouper action continue for us out deep and even near shore as they are an incredibly good eating grouper species.

Mangrove snapper are biting well offshore for us on a variety of trips. We are doing best using that 40-60lb leader and double snelled 6ot hooks using a chunk of threadfin or sardine and a 4-6oz lead on a fish finder rig. These guys take a little practice and a sensitive rod and a fast reel to really dial in on, but once you master the mangrove snapper bite in deep water, that skill translates into being able to catch most anything that bites.

The pelagic action offshore is crazy right now In the past week, we have seen tuna, kingfish, wahoo and caught two sailfish! One sailfish was released alive while the second was nearly done and was harvested. 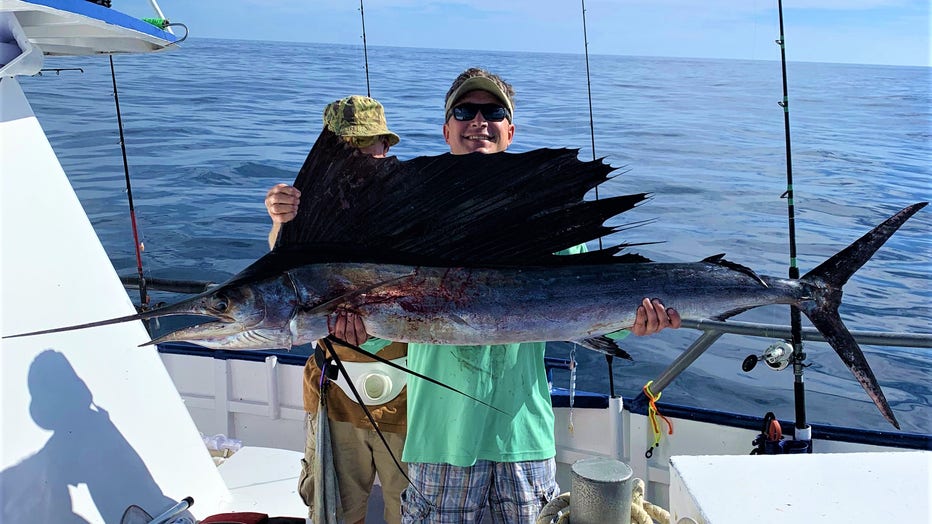 The wahoo was caught trolling a Nomad DTX Minnow with a red head and white body. The first sail was caught dropping a live pinfish to the bottom and the second was caught on the flat line. Tuna have mostly been trolling Rapala X-Raps along with kingfish, but we did get one on a slow pitch jig too. 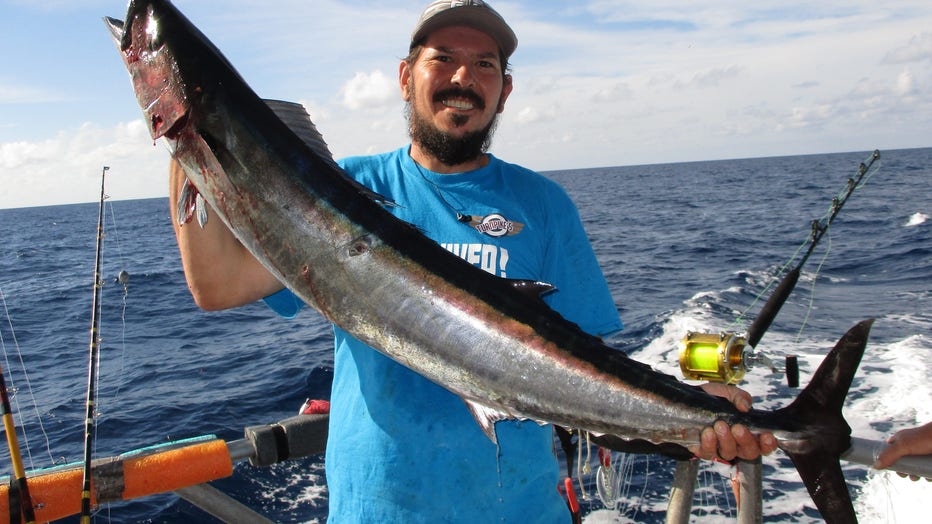