Pompano bite has started to pick up. It’s still early but we are going to see more and more of these guys through the fall period as we look forward to their return to the beaches, says Captain Dylan Hubbard of Hubbard's Marina.

Red tide has been detected around John’s Pass this past week. We are seeing very high concentrations around the pass and just north of the pass along the beaches and in the bay. Luckily, overall, Tampa Bay still seems clear.

Keep an eye on the forecasts and reports via this link if you are interested.

Despite the red tide along the beaches and passes, we are still seeing a lot of inshore action around the area. Redfish bite has been on fire lately around the inshore waters – even inside the pass at the start of the week and over last weekend prior to the resurgence of the red tide.

The OZONIX Mobile Water Treatment Unit, contained on a tractor-trailer, has been deployed previously for various types of wastewater treatment and is now being tested for Florida red tide mitigation.

We are seeing plentiful redfish around the docks, bridges, piers, jetties, and virtually adjacent to any structures that will hold bait. These guys are hugging the bottom cruising by dock lights, bridge lights and anything again that holds or attracts prey items at night.

During the day, we are seeing areas and schools of redfish around the flats, oyster bars, mangrove shorelines and even dock lines. Really, the best way to find them is to find the mullet on the flats. Typically, around these schools there will be hungry redfish following or in the vicinity. Right now, fishing around early morning just prior to and just following the sunrise has been best. 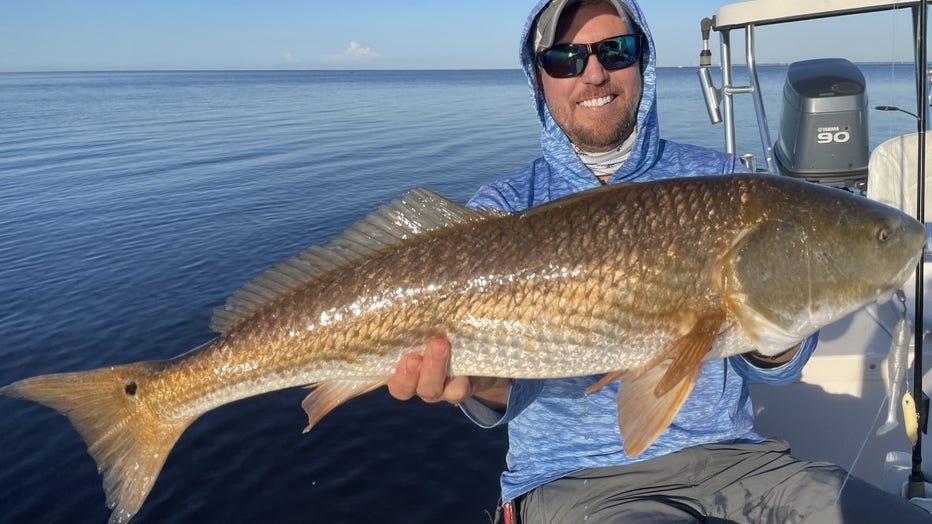 During the day, they are more lethargic, but you can find them hanging in the shade of mangrove shorelines during high tides foraging the mangrove roots.

Snook action has been slower this past week, but we’re still seeing lots of them around local docks, piers, bridges, and virtually any structure that will allow them a place to hide from the current and ambush passing baits. At night, the bridge lights dock lights and other lights in the water are holding bait and thus snook too. During the day, they are around the local spoil islands, and staging up to move back into the bay with the cooling waters. Dock lines adjacent to flats, passes and moving water have been a great option for snook this past week. 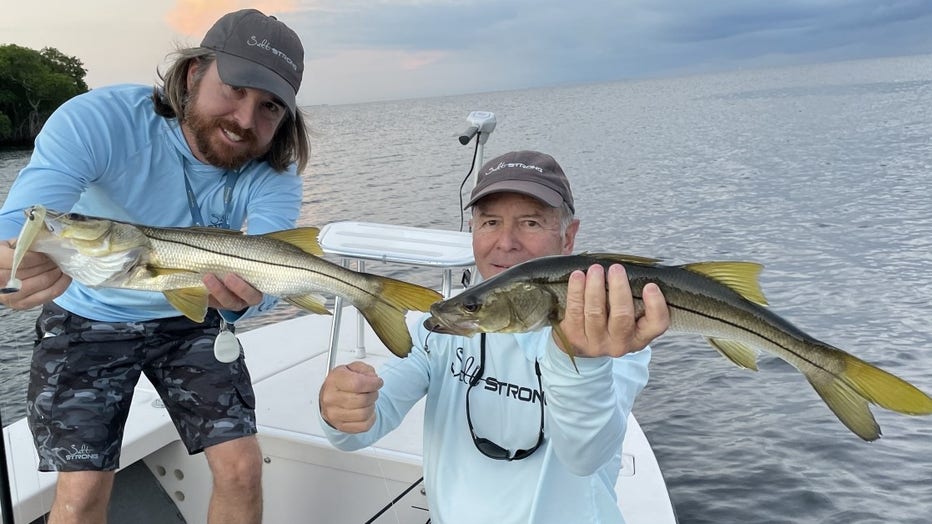 Trout action remains steady through the area, but they are there if you target the flats. Look for them around 3 to 5 feet of water right now as the little bit of reprieve from warmer waters have pushed them a bit more shallow. Edges and potholes of shallower flats are great areas to find them as well. Remember, that first 6-10 inches above the grass on a flat is the strike zone, so you want to keep your bait right in that range on retrieve. 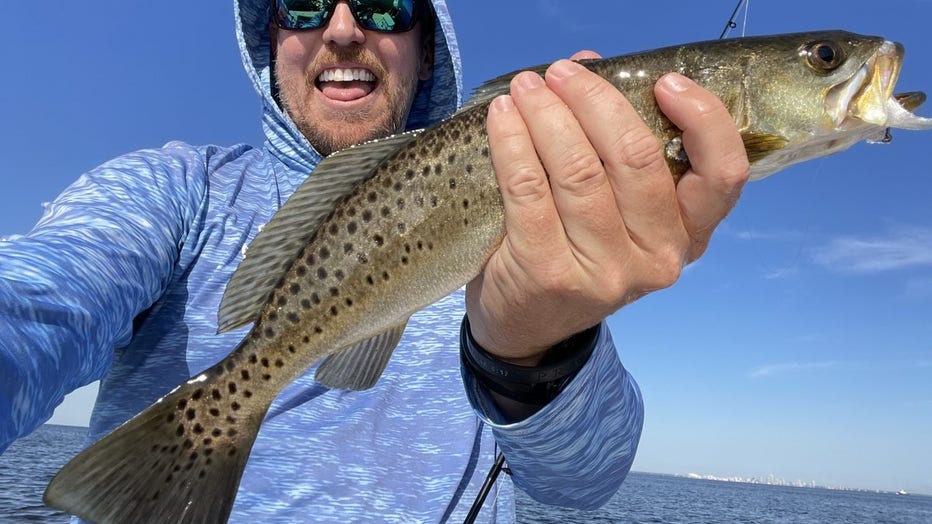 Mangrove snapper action is still going well through the area, but as waters cool, many of those fish will move near shore – especially the larger more reproductive fish. Nearly half of the mangrove snapper reach maturity at ten inches and about 70% are mature at 12 inches. 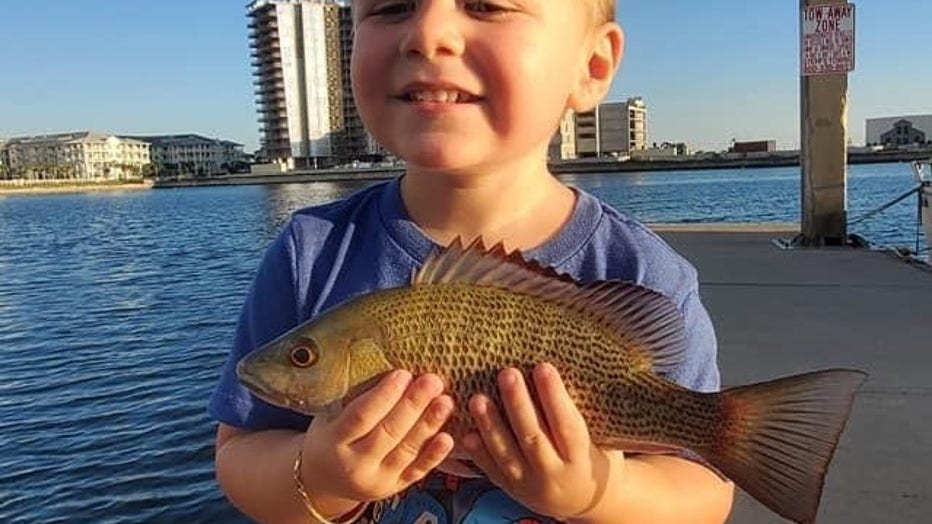 Once they reach these sizes they will push near shore on the moon phases to start their adult life outside the estuarine system. This is the time of year to capitalize on the high concentrations before they dwindle with cooler water temps.

Sheepshead are starting to pick up more and will only get more concentrated, prolific, and aggressive as water temperatures drop. Look for them around the docks, piers, bridges, jetties and any structure with barnacles and  that will be home to the crabs, crustaceans and other prey items they will hunt for.

I really like working the corners of the canal fingers that protrude out into the bay. If you find one with decent water flow adjacent to a flat you will often find plentiful sheeps ready to eat.

Black drum action going well around the area too. It’s a great time to target them around bridges, dock lines, and sometimes you can spot them cruising the flats. Large shrimp, crabs and sometimes even slow-moving soft plastics are great options for these sometimes large fish. They love the cut dead crabs on the bottom around local bridges too.

Triple tail are thick around the bay and along the beaches under virtually any floating debris or markers. You don’t always have to see them, many will hang below the surface on those markers and floating down a live shrimp on a light split shot down the markers of the bay is a great way to pluck a great eating triple tail.

Mackerel are thick around the area. Big schools of bait are really getting mackerel excited. Look for birds diving around the flats and bay while cruising around and you will easily find schools of actively-feeding mackerel, often mixed with sharks and perhaps tarpon too.

Pompano bite has started to pick up. It’s still early but we are going to see more and more of these guys through the fall period as we look forward to their return to the beaches. Passes are great areas to target them as these areas naturally concentrate them as they move from the bays to the beaches. Sandy bottom areas using live shrimp on the bottom or bouncing a pompano jig around the sand is a great way to get them.

We just got the announcement that lane snapper will be closing after October 17, which is absolutely wild news.

Aside from that, we are seeing an increase in the hogfish action near shore which is a great sign of the things to come as the waters cool. We are starting to see a few hogfish here and a few there. That will only get better and better as they concentrate more and more around structures once again as cold fronts begin. Look for these guys around smaller ledges hunting live shrimp on lighter tackle and even fiddler crabs, sandfleas and rock shrimp are good options for hogfish too. 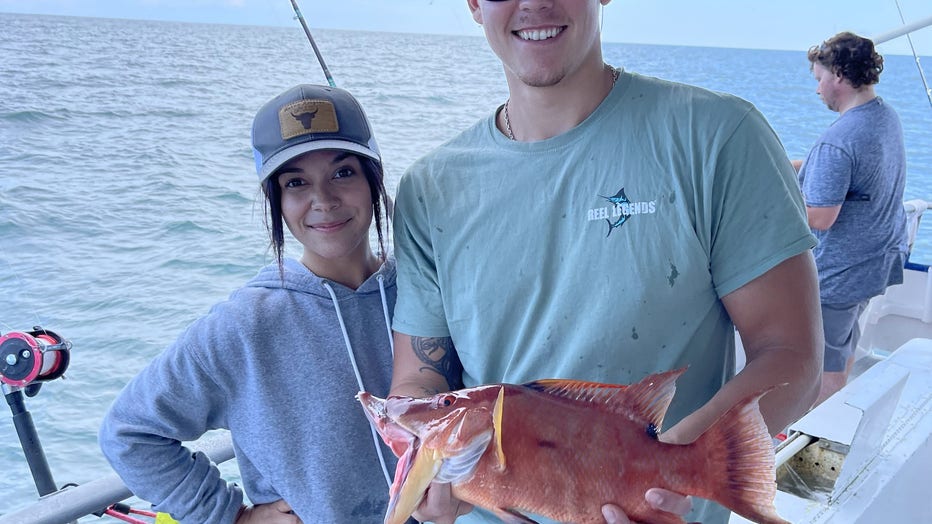 Mangrove snapper are around near shore too, plus we are seeing some good black seabass bites lately as well. It’s a great time to go hit those near shore structures with small chunks of threadfins, live shrimp or greenbacks to get some snapper, seabass, possibly hogfish as well.

Don’t forget your flat line either, we are seeing huge numbers of mackerel and kingfish lately. We did get our first kingfish of the fall run near shore end of last week and we have caught a handful more since. However, the late resurgence of red tide definitely pushed the bait and thus macks and kings out a ways from shore but we’re hoping that will subside quickly again allowing the action to return to the beaches.

Blackfin tuna action is heating up as waters chill a bit, and we should see them get even more concentrated and hungry as that continues. We are seeing them on the flat lined live and dead baits while bottom fishing. Plus, on vertical jigs as well when working the medium water column. It’s a great time to get some tuna action while offshore bottom fishing. 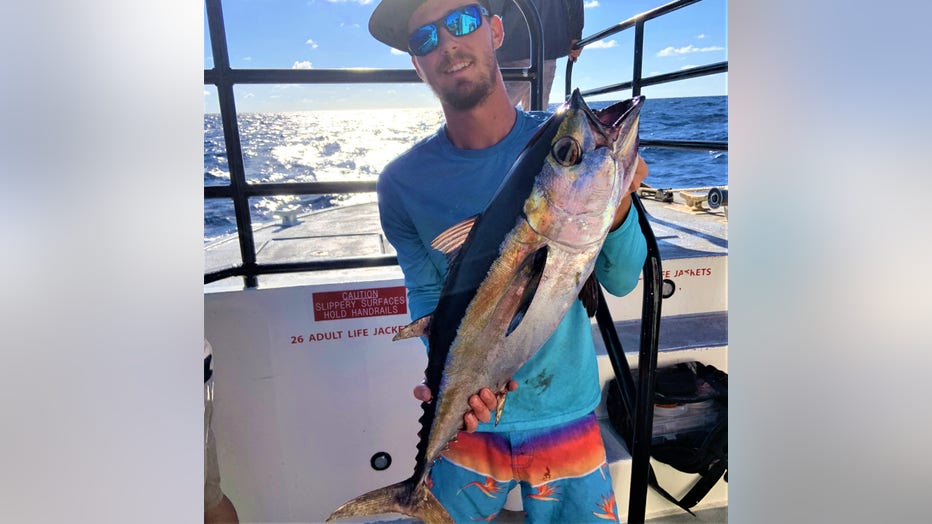 Besides tuna, we are still seeing wahoo from time to time offshore, plus, the occasional kingfish are around too. These pelagics are great additions to your bottom fishing catches while making your way offshore beyond 100 feet of water.

Gag grouper action is a little sporadic, but you can find them on those ledges, peaks and structures out deeper past 140 feet of water it seems. Plus, we are seeing some nice scamp grouper mixed in with them too. Live bait is tough to get out there with the red tide around inshore, but we are using some of the baits we catch near shore and offshore for gags with great success like the white grunts, porgies that aren’t in the FMP and others too.

Amberjack action is a little spread out and timid, but if you can find them chewing they are still open until end of October! We are seeing some nice ones around springs, bigger ledges, wrecks and other places holding plenty of bait and prey items.
Mangrove snapper action is going well offshore and were seeing big porgies, vermillion and the occasional yellowtail mixed in with them too. Using that double snell rig with cut threadfins is a great way to target the mangrove snapper.