Flavored vapes could soon be banned in some stores

The new regulations are expected to limit flavors to just tobacco and menthol, wiping out much of the stock on the shelves of stores - but there may be an exemption for stores that only sell vaping products.

TAMPA, Fla. - A federal ban on flavored vaping products is expected this week and could force a lot of companies to change how they do business.

The ban comes as the Trump administration attempts to find a solution to what is being called a vaping epidemic. Federal health officials report 34 deaths and more than 1,600 injuries related to vaping.

Erin NesSmith, a Sarasota mother, is currently involved in a lawsuit that claims vaping caused her teenage daughter to have seizures.

"It's been literally the worst thing I've ever been through in my whole entire life. To watch your child who had so much going for her and then in the past two years, watch her go through hell," NesSmith told FOX 13, adding she believes her daughter initially got addicted to flavored products.

The new regulations are expected to limit flavors to just tobacco and menthol, wiping out much of the stock on the shelves of stores - including at All Access Vapor in Lutz, which currently sells 104 flavor varieties.

"It would definitely put a damper on anybody who owns a vapor store. Going from hundreds of flavors to just a couple is going to hurt any kind of business," said owner Mike MacArthur. 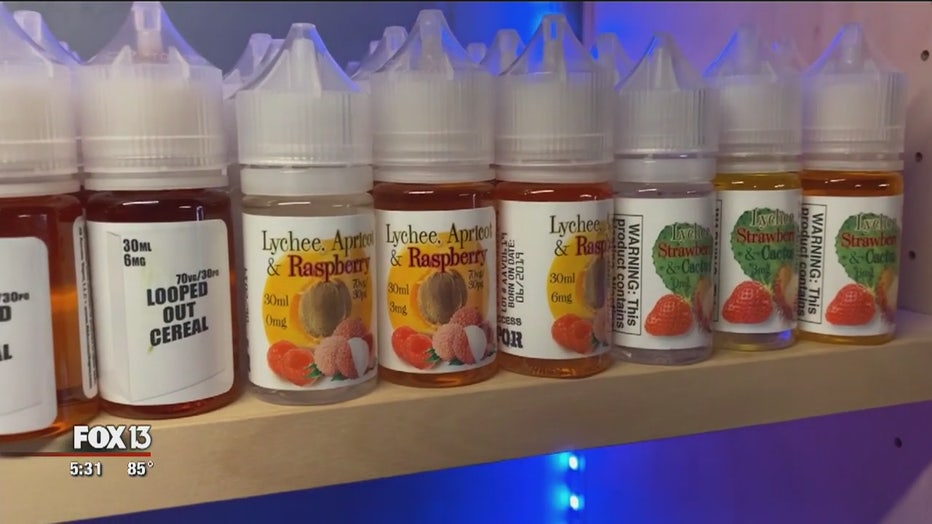 The regulations, however, could include an exemption for businesses that only sell vaping products, targeting convenience stores where teenagers have said they largely purchase the items.

If that's the case, MacArthur's store would be spared. He counts All Access Vapor among the responsible companies that never sell to children. He says the products are also made in an air-tight lab inside the business before they're packed, sealed, labeled, and put out on the shelves.

"It's kind of a farm-to-table way of making the juice, so we know exactly where it comes from, what's in it and, when it gets to the shelf, there's no middle man at all," he explained.

MacArthur said he agrees changes are in order to help keep vaping products out of the hands of young kids, but he doesn't want regulations to go too far.

"I think it needs to be handled properly to know that we're not getting them into the hands of the youth. If kids are able to get this stuff, that's definitely a problem. I fan adult who has a choice of not smoking by coming into a vaping store and vaping, that should be allowed," he said. "Raising the age limit to 21 to get rid of that grey area where somebody in high school would be able to buy this product and take it into the schools and distribute it to whoever."

According to the Centers for Disease Control and Prevention, more than a quarter of all high school students are using e-cigarettes.

Those against the ban, however, have argued there are a number of benefits to vaping: e-cigarettes are often used to help people quit smoking and cigarette smoking among high school students is at an all-time low.