TAMPA, Fla. - John Horne says, when you first look at Amendment 2, raising the minimum wage sounds like a great idea.

“You know what, absolutely; we need to pay people more. But when you learn of the unintended consequences, you’ve got to say no, we can’t do it this way.”

The proposed amendment would raise the minimum wage in Florida of $8.56 per hour, gradually, over the next six years – up to $15 an hour.

“In my restaurant, if I start raising my prices to cover this increased wage, my guests are going to eat with me less,” Horne said. “And consequently, I’m going to need less hours.”

Horne believes it’ll hurt everyone from the servers to the cooks. 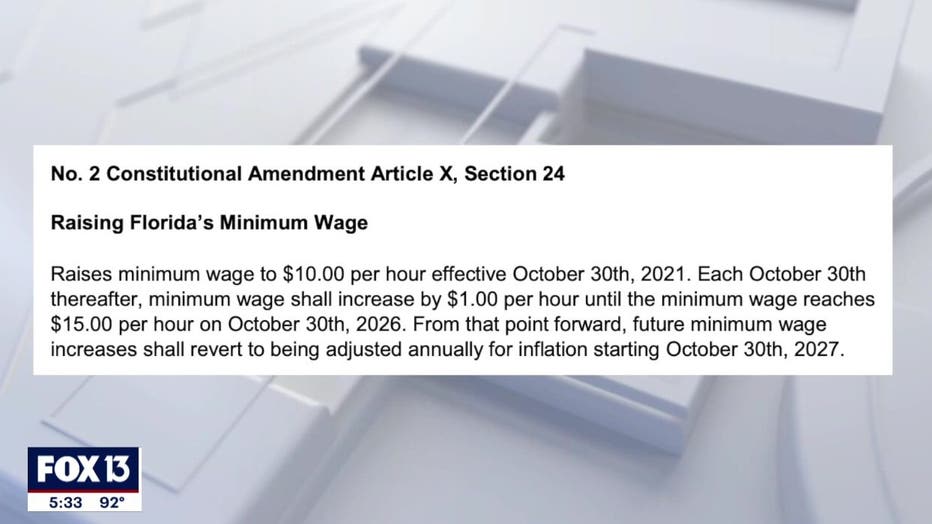 “Right now our minimum wage in Florida is set at a poverty rate, and the right thing to do is to pay people a fair wage for the work that they do.”

Ferrari disagrees with Horne’s notion that the increase would drive prices up.

“When our communities are raised up from poverty, that sales for local businesses will have to go up.”

Less than a month before the election, polling shows the amendment could be on the cusp of passing. Sixty percent of those polled by The University of North Florida support it. Thirty-seven percent opposed it.

It takes 60 percent of the vote to pass.

If passed, the first bump in wages Florida would see would come next September, when it would increase from $8.56 to $10 an hour.