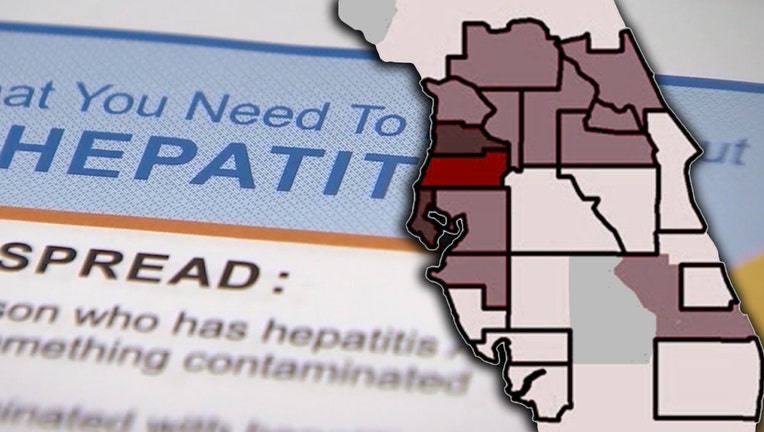 ST. PETERSBURG, Fla. - The Tampa Bay area has been hit especially hard by hepatitis A cases this year.

The region has led the state this year with 466 new hepatitis A cases in Pasco County, 369 in Pinellas County and 145 in Hillsborough.

Pinellas health officials were the first in Florida to deploy "foot teams" into areas where people at risk for hepatitis A tend to gather. They've administered 789 vaccines since May. Now, other counties are undertaking similar efforts.

Since January 2018, Florida has recorded 3,395 cases of hepatitis A. The virus affects the liver and spreads through contaminated feces. It causes symptoms like fever, dark urine, yellow-tinged skin or eyes, fatigue and gastric issues. People pass it along by eating or drinking tainted food or water, or through sex.

Since 2016, outbreaks have hit 29 states, beginning in California and Michigan, Kaiser Health News reports. More than 25,000 cases have been reported nationally in the last year.

In the Tampa Bay area, reports of food service workers infecting others at local restaurants have dominated the news coverage about hepatitis A. Workers who handle food and don't wash their hands after using the restroom or forgo using gloves can pass the virus onto others.

Public health experts say the majority of hepatitis A cases come from white men in their young adult years to middle age. Most are transient, with limited access to sanitation methods and are more commonly drug users.

Free hepatitis A vaccines are part of an aggressive effort to beat back an outbreak that recently prompted Florida Surgeon General Scott Rivkees to declare a statewide emergency.

The local health department has already visited one motel in St. Petersburg three times this year. It's where people rent rooms by the hour, the month, and anything in between. Many of the renters would be homeless, and are at risk for hepatitis A.