Back in 1962, CBS chose Tampa's WTVT-TV to provide network pool coverage of John Glenn's orbital Friendship 7 flight. It was the first return from space to be covered live. You can see WTVT camera operator Joe Wiezycki in these grainy shots from the deck of the USS Noa.

TAMPA, Fla. - For all the deafening rocket launches, the technological wizardry, and the glorious images of Earth from orbit, the story of the exploration of space is, at its core, a human story. And no one knows that better than the reporters whose job it is to cover the Cape.

WTVT has been covering the space program since its inception, and our current team of journalists -- fronted on-camera by Warren Elly even after his 2011 retirement -- is by far the most experienced local television crew in the country.

"We have never missed covering a shuttle launch, and we are the only station in the market to maintain that vigil," Elly explained. "We have continued the tradition of the television pioneers who first opened the doors of Channel 13 and provided pool video for the Mercury and Gemini launches that preceded the Apollo moon program."

The current team -- including Warren, along with Mark Zewalk, John 'Mak' Makinen, and Chris Boex behind the camera -- counts among them over 300 launches covered in person. But no one's quite sure how many.

"I've tried to count several times. Best I can come up with is the low nineties," Warren said of his launch tally as of 2006. 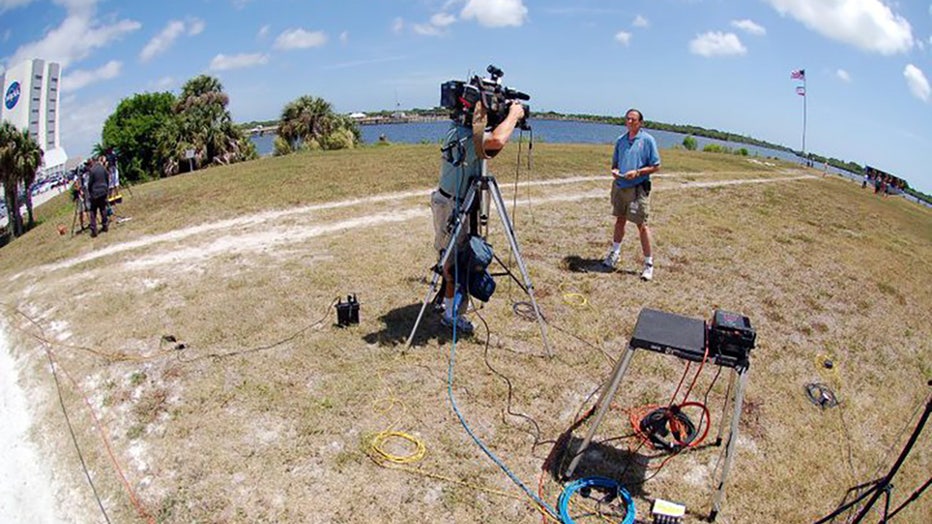 For Elly and Zewalk, their experience dates back to the early days of the shuttle program. But Mak's launch history goes back to a landmark moon mission.

"The first launch I remember going to was Apollo 8 in December 1968," he explained. "It was a couple days before my birthday, as I recall."

Apollo 8 was the first mission that sent men into lunar orbit. Mak was there again when Neil Armstrong and his crew blasted off seven months later.

"My best memory is being at the launch of Apollo 11 and realizing that these guys were hopefully going to another piece of real estate in our solar system for the first time in human history," he continued.

But for all of the high points, there were some very low moments.

WTVT was one of the only stations on hand for Challenger's ill-fated January 1986 launch with teacher-in-space Christa McAuliffe on board. What had become routine quickly became a seemingly continuous nightmare that satellite truck operator Mak and photojournalist Zewalk still remember clearly. 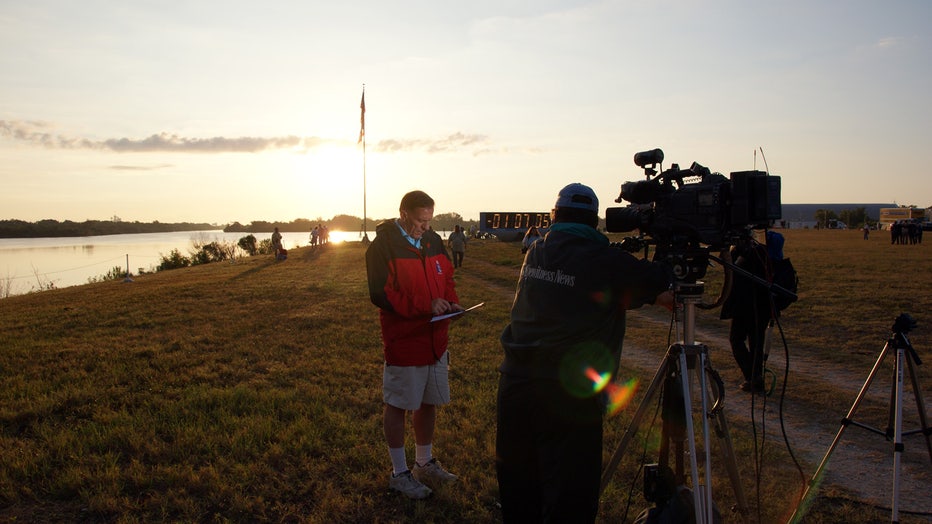 "I remember the freezing cold, China-blue clear sky, and the crew families just feet from our camera. I was filming Christa's parents and stole a glance at the launch exhaust trail above me. I saw the split-tail smoke trails and knew immediately something seriously wrong was happening," Zewalk recalled. "Her mom's reaction will be with me forever. I leave the room whenever historical programs run the footage of the explosion."

"The next three or four days were just a blur since we were covering the event for stations in all four time zones," Mak added. "We would start at 5 a.m., finish at 2 a.m., then start all over again. We didn't get much sleep for a few days."

For Elly, watching pieces of the Challenger come ashore prolonged the disaster.

"You knew it was risky, that these folks were putting their lives on the line. But seeing the orbiter's wreckage with the U.S. flag on it going down into a missile silo was just too much," he explained. "A close second was walking through the wreckage of Columbia, laid out in a Cape hanger, realizing just how little of the orbiter came back -- and how no human could possibly survived."

Warren Elly's report from February 1, 2003 -- the day of the space shuttle Columbia disaster.

The program, of course, is resilient, bouncing back after both the Challenger and Columbia accidents. And those return-to-flight missions are what Zewalk and Elly cite as their favorite moments.

"The people at NASA really are involved at a gut level in their work," Zewalk observed. "Loss and achievement are keenly felt, and it shows."

That's something that hasn't changed through the years, even if the space program itself -- and the job of covering it -- has.

With more than 40 years of experience under his belt, Mak has a unique perspective on those changes. He recalls the heady days of the moon race with the Soviets -- when "money and equipment was no problem."

"The space program was getting settled into its routines of launching every few months and the equipment was just about perfected. With the coming of the space shuttle, it started to become more of a business." 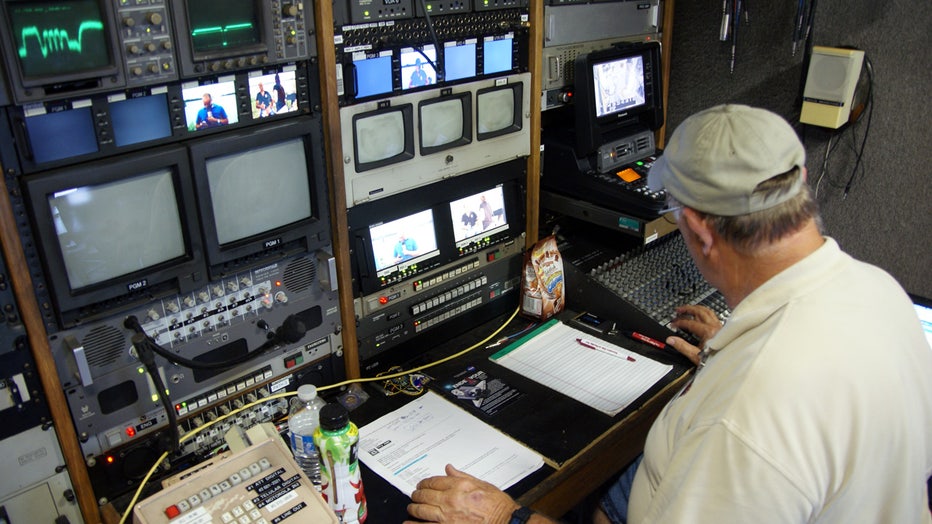 Inside the FOX 13 satellite truck for the final flight in 2011.

Some of the very technologies developed to advance the space program have helped improve the coverage of it. For instance, the live shots that seem ubiquitous today were unheard of back when Mak started.

"The equipment to go live was not available to local TV stations," he explained.

Also, it was shot on film which had to be brought back to the station to be processed," he recalled. "Now, with satellite trucks and videotape, we are live at the time the event is occurring."

Now, the internet is the latest new technology that just makes it easier for FOX 13's team to uphold the WTVT tradition. 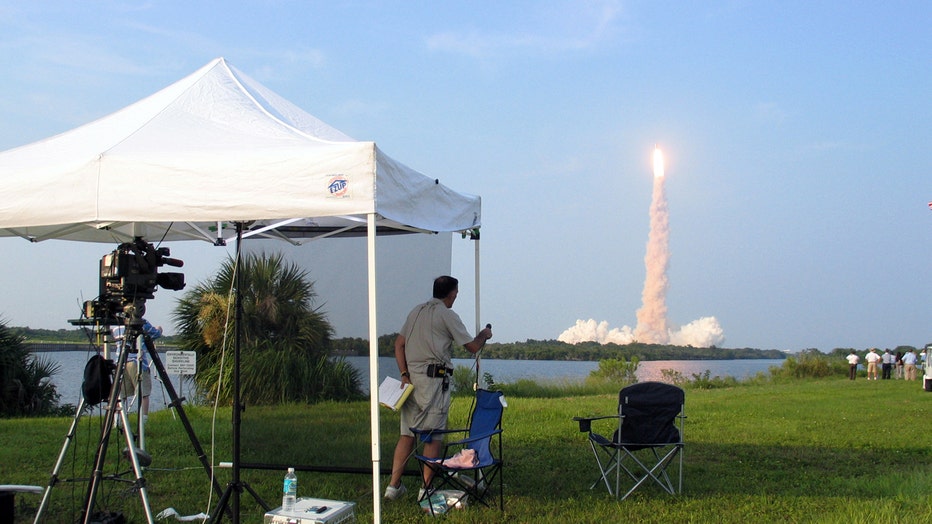 "Our coverage has remained, I'm proud to say, consistent and steady," Elly insisted.

So, if offered the chance, would they take a ride on the shuttle?

"In a second," Elly replied.

"Are you kidding?" Zewalk offered. "Of course, I'd be the test study for space-sickness."

"If invited to go on the shuttle," Mak explained, "I would decline the opportunity as I don't even like to fly in an airplane."