At least 4 deer shot with arrows in Palm Harbor

PALM HARBOR, Fla. - An investigation is underway into who is shooting deer with a bow and arrow near the Lansbrook Community of Palm Harbor.

Several photos show deer with arrows throw their leg, abdomen, and neck – and now the Florida Fish and Wildlife Conservation Commission is investigating.

"We are all absolutely horrified by someone that could do this and we all want to help," East Lake resident Nancy Bloch said.

The photos were snapped by residents within the last two weeks. It's a frustrating site for neighbors like Lexie Vanderweit. 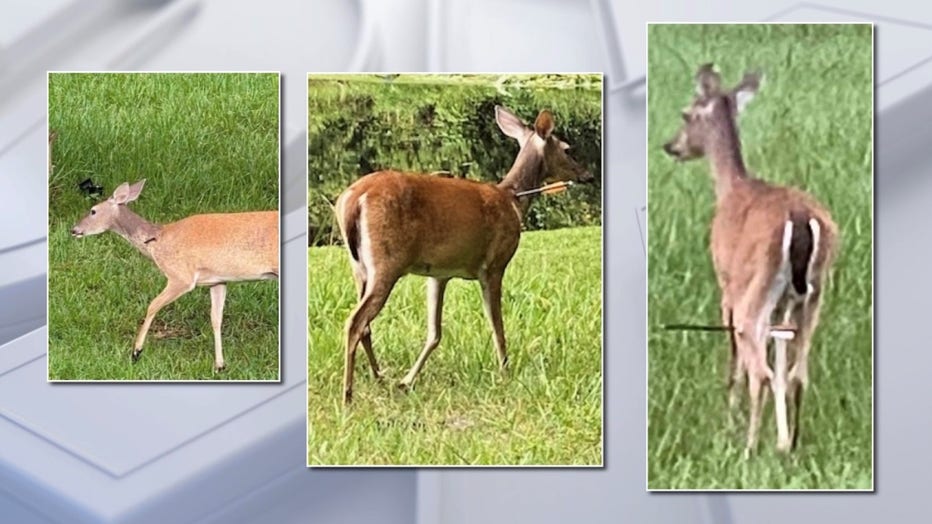 "It's just dangerous on so many levels. Plus the animals are getting hurt. If they are walking through the woods and they have an arrow sticking out of them on both sides, they could get stuck by a tree," Vanderweit said.

Vanderweit worries how many more could fall victim.

Bloch says thankfully the doe with an arrow through its neck was recently spotted without it.

"I can't wrap my brain around the fact that someone could hurt an innocent animal like that and I'm afraid this could lead to something much worse," Bloch said.

According to FWC, rangers are keeping close tabs on the area and are ready to help any deer in distress that they may come across.

"Officers have responded to the reported locations and searched for the deer to better assess their condition, but have not been able to locate them," an FWC spokesperson said in a statement emailed to FOX 13 late Tuesday. "The FWC takes these reports very seriously and encourages the public to report any sightings.

Anyone with information about the deer seen with arrows, or who might be shooting them, is asked to call the FWC tipline at 888-404-3922.

Callers may remain anonymous and may also be eligible for a reward if the information results in a citation or arrest for wildlife, hunting, or fishing violations.