Pain at the pump: Gas prices & U.S. relationship with Russia

Prices at the pump have continued to climb nationwide despite efforts by several governments to quell the rise in oil. LiveNOW talks with Andrew Lipow, President of Lipow Oil Associates about the high prices and the United States relationship with Russia.

As gas prices continue to reach record highs, many drivers have been feeling the pinch at the pump, while electric car owners have been reveling in their purchases.

The national average for a gallon of gas hit $4.35 Friday, up from $3.92 a week ago, and it is expected to continue to rise amid Russia's ongoing war on Ukraine.

This has led many car owners to question whether buying an electric vehicle is a smart move or a better option in the long run.

Advantages of owning an electric-powered vehicle

U.S. electricity prices, which are heavily regulated in most states, have remained stable. In most cases, the cost to charge an electric car is still lower than filling up one with an internal combustion engine.

According to the Environmental Protection Agency (EPA), the national average for a kilowatt-hour of electricity is 13 cents, including at homes where most electric car owners charge their vehicles with 240-volt Level 2 chargers that typically take eight hours or more to fill them up. Many of these are also available in public settings like office and shopping center parking lots, where they are known as destination chargers.

On the Electrify America network that's compatible with all electric vehicles, fast-charge rates are as high as 43 cents per kilowatt-hour in some states, including California, New York, Florida and Washington. The price can be reduced to 31 cents by enrolling in a membership with a monthly fee. 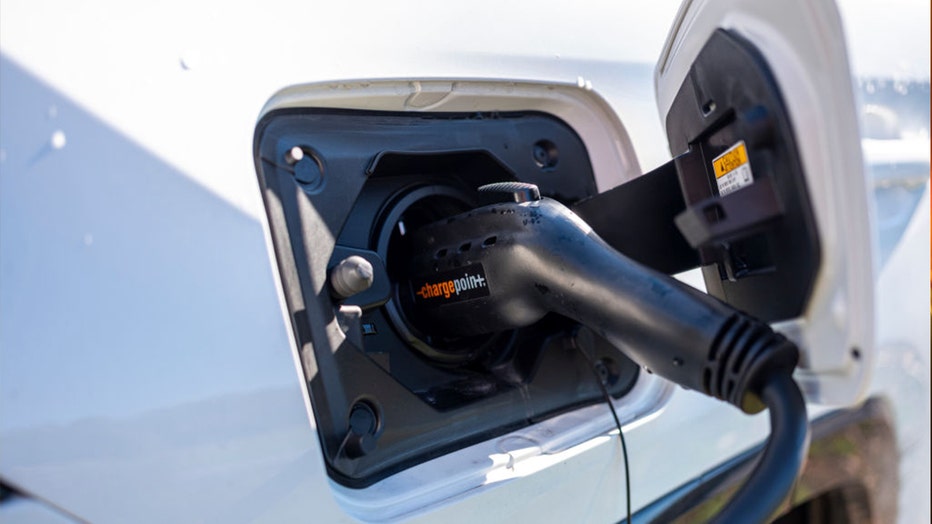 A 2021 Toyota RAV4 Prime electric car recharges its batteries November 5, 2021 at a charging station next to the town hall in Charlotte, Vermont. (Photo by Robert Nickelsberg/Getty Images)

Aside from the lower cost of charging an EV, another positive impact to owning one is its reduced need for regular maintenance, since there are no oil changes, exhaust system or other mechanical components to break under the hood. This can be attractive for both its financial and commitment standpoints.

In addition, owning an EV has a lower direct impact on the environment, due to the reduction in greenhouse gas emissions during driving. Because of this, incentives from the government, such as tax credits, make electric car buying an attractive prospect for many drivers.

RELATED: Florida motorists can get gas tax break -- in October

Advantages of owning a gas-powered vehicle

While filling up an electric vehicle is more cost-efficient, there may still be advantages to owning a gas-powered vehicle.

First, a gas-powered vehicle typically has lower up-front costs to buy, making this type of vehicle attractive to buyers. Electric cars are usually more expensive than comparable gas vehicles, even after federal and state tax incentives on EVs.

But it’s not only the cost that can become an issue. Owners of an EV need to have a place — along with the space — to plug in an electric vehicle at home. Otherwise, you will need more time on your hands to find and wait at an electric vehicle charging station.

Some EVs are capable of recovering up to 80% or more of their energy in as little as 20 minutes, but the charging speed slows considerably as the batteries approach capacity, according to Autoweek.

In addition, gas-powered vehicles have a long driving range which makes them practical for road trips and longer destinations; many EVs on the market are limited to about 200 miles in range.

Familiarity can be a factor. Internal combustion engines have been around for a long period of time — over a century — providing a familiar experience to drivers.

Breaking down the numbers

Data produced by FOX News also shows that gas-powered vehicles may still not be that much different in price than charging an electric one.

According to the outlet’s analysis, charging an entry-level version of the Ford Mustang Mach-E — which has a starting price of $37,495 after federal tax credits are deducted and a range of 247 miles between charges — would cost $2,100 annually for 15,000 miles of driving, compared to $1,500 at 31 cents and just $650 in an average home.

RELATED: Filling a gas-powered vehicle may still be cheaper than charging an electric one

FOX Business contributed to this story.