Several Democratic senators are calling for suspending the federal gas tax for the rest of the year to help consumers struggling with rising fuel prices. If passed, the bill would save drivers 18 cents a gallon.

TALLAHASSEE, Fla. - House and Senate negotiators agreed Wednesday night to use $200 million in federal stimulus money to give Gov. Ron DeSantis part of his request for a gas-tax break, as they wrapped up more of a budget that will send the annual legislative session into overtime.

House Appropriations Chairman Jay Trumbull, R-Panama City, and Senate Appropriations Chairwoman Kelli Stargel, R-Lakeland, approved a wide range of uses for $3.46 billion in stimulus money. That included funding the gas-tax break, which would occur in October, just ahead of the November elections. Also, they agreed on more than $450 million in additional tax relief, which had mostly been included in a House bill (HB 7071).

A budget that will top $100 billion is expected to be completed Thursday, with Trumbull and Stargel still hammering out differences on what are known as "conforming" bills, including a controversial environmental package (SB 2508).

The state is flush with cash from the stimulus money and higher-than-expected tax revenues. But House and Senate leaders could not complete the budget by a Tuesday deadline, meaning lawmakers likely will have to return to Tallahassee on Monday to vote on a spending plan for the fiscal year that will start July 1.

"People always think it’s harder when you don’t have money. I would say it’s been harder to try and figure out how to appropriately fund things in an efficient and effective way," Stargel said.

Stargel and Trumbull said some uncertainty remains about how the state would distribute what negotiators are calling a "School Recognition Fund." That $200 million fund would be used to reward school districts that did not require students to wear masks last year during the COVID-19 pandemic.

Initially, the House wanted to shift $200 million away from 12 districts that imposed mask mandates. But that was revamped Tuesday to create the "recognition" fund.

Stargel told reporters Wednesday the Senate did not agree to a House proposal that would have made the 12 districts ineligible to receive the recognition funds. She said the proposal was in budget fine print known as "proviso" language. She said it will be addressed in a budget "implementing" bill, which will help carry out budget issues.

Florida drivers started the week with some of the highest gas prices we've seen in a decade, and those prices are expected to keep going up.

"We didn’t accept that proviso. But it is going to be in implementing, which is going to have the parameters under which that money will be distributed to all the different counties," Stargel said.

"I think that one of the things when having this amount of funds that was a struggle, we tried to put the funds where it was a priority, not necessarily grow government and grow programs," Stargel said. "We’ve had teachers who haven’t had funds for many years, because of the downturn that we’ve had. So we put the money into hoping to retain quality, great teachers."

Is Russia to blame for spiking gas prices?

Russia's invasion of Ukraine hasn't brought tanks to our streets, but it has made it cost more to fill our own tanks.

Lawmakers also are on course to raise the minimum wage for all school employees to at least $15 per hour.

"We put money in the BSA (base student allocation) to make sure that the cafeteria workers and the school bus drivers and everybody got to the $15 an hour," Stargel said, noting that voters in 2020 approved raising the statewide minimum wage to $15 an hour by 2026. "We know that that’s going to be hitting our state soon. We wanted to make sure that we … got ahead of that with these funds, while we have them."

Negotiators also released details about how federal stimulus money will be appropriated, which will include $1.5 billion going to education building projects. 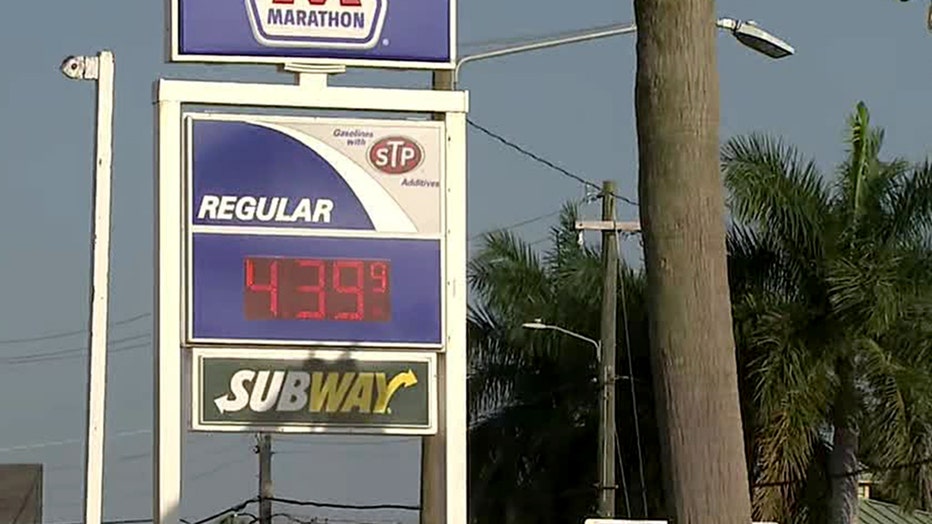 A separate House proposal (HB 5011) called for setting aside $2 billion as a hedge against increased government costs driven by inflation and to make a political statement against the federal government. That amount landed in negotiations at $1 billion.

DeSantis has pushed for suspending the state’s roughly 25-cent-a-gallon gasoline tax for five months starting July 1, the start of the next fiscal year. Gas taxes help pay for transportation projects, and DeSantis proposed using stimulus money to make up revenue lost during the five-month period.

But legislative leaders questioned the proposal because tourists would receive a large amount of the benefit of a suspended gas tax. Senate President Wilton Simpson, R-Trilby, said Wednesday that May and October are the months the state typically draws it fewest number of tourists.

"The budget will not go into effect until July," Simpson said. "So the only other month that we could do that in was October. I think it's a great opportunity. We don't know if gas will be at $4.50 a gallon or $8 a gallon by them, but it's certainly something that we believe that most Floridians would agree with."

Simpson, Trumbull and Stargel dismissed suggestions that the October date is timed with the election.

Lawmakers also would funnel $50 million in federal money to the Job Growth Grant Fund, which the governor can use for infrastructure and job-training projects; $300 million for land conservation in the Rural & Family Lands Protection Program; $100 million for aquifer storage and recovery wells on the north side of Lake Okeechobee; $200 million for grants to help local communities fight rising sea levels; and $400 million to expand broadband.