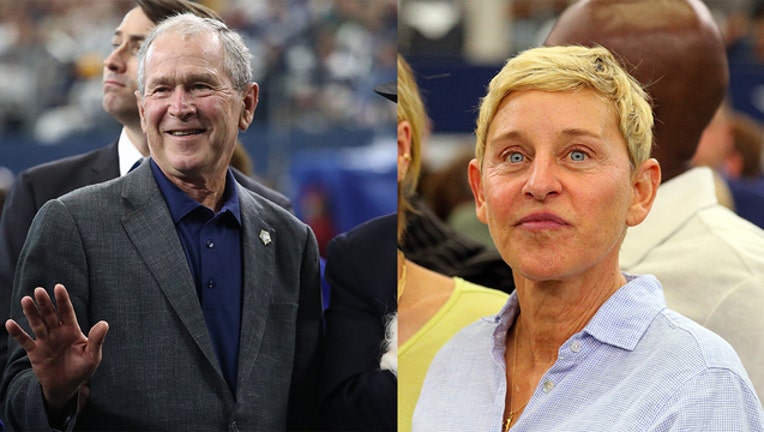 LOS ANGELES - Former President George W. Bush said he "appreciated" friend Ellen DeGeneres' comments about respect after the comedian took a stand against the Twitter mob shaming her for sitting next to Bush at a football game.

Bush's spokesman, Freddy Ford, told Fox News exclusively on Tuesday: "President and Mrs. Bush really enjoyed being with Ellen and Portia (de Rossi) and appreciated Ellen's comments about respecting one another. They respect her. "

The former president's comments come after DeGeneres was photographed sitting next to him at a Dallas Cowboys-Green Bay Packers game on Sunday.

The backlash over the pictures caused DeGeneres to defend her "friend" on her talk show on Monday.

"When we were invited, I was aware that I was going to be surrounded with people from very different views and beliefs. And I'm not talking about politics... I was rooting for the Packers," DeGeneres joked. "So I had to hide my cheese hat in Portia's purse."

She noted that some "people were upset."

"They thought, why is a gay Hollywood liberal sitting next to a conservative Republican president?... A lot of people were mad. And they did what people do when they're mad... they tweet," she told her audience.

"When I say, 'Be kind to one another,' I don't mean only the people that think the same way that you do. I mean be kind to everyone. Doesn't matter."

DeGeneres concluded by thanking Charlotte and Jerry Jones -- Jerry Jones is the owner of the Dallas Cowboys and Charlotte is his daughter --as well as George and Laura Bush for a "Sunday afternoon that was so fun," but added that they owe her "six dollars for the nachos."