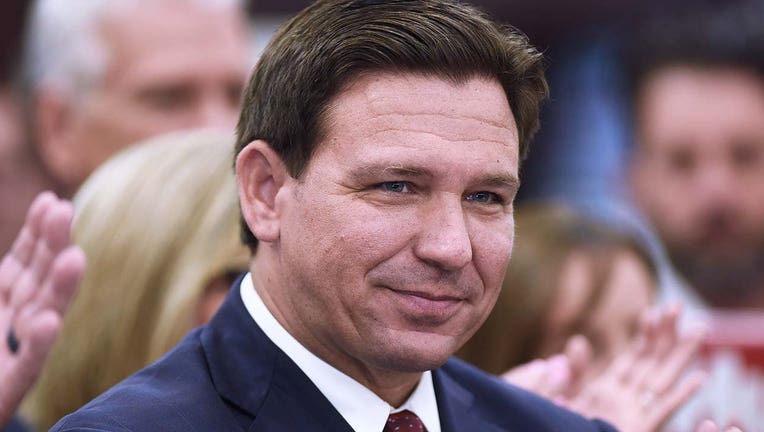 OCALA, FLORIDA, UNITED STATES - 2022/05/06: Florida Governor Ron DeSantis listens to a speaker at a press conference at Samâs Club in Ocala, where he signed into law more than $1.2 billion in tax relief for Floridians, the largest tax relief packag

TALLAHASSEE, Fla. - Breaking from the Legislature’s efforts to punish school districts that imposed mask mandates during the COVID-19 pandemic, Gov. Ron DeSantis on Thursday directed Florida’s new education commissioner to ignore a plan that would have made the districts ineligible for $200 million.

DeSantis, who signed the state budget for the upcoming 2022-2023 fiscal year, also sent a "directive" to Education Commissioner Manny Diaz about how to deal with money funneled into the "School Recognition Program."

The $200 million pot of money was placed in a reserve fund and was intended to be distributed to 55 school districts that did not require students and staff members to wear masks amid a push by DeSantis’ push to block such mandates.

PREVIOUS: Florida superintendent who defied DeSantis by pushing masks in schools gets ousted

Under the Legislature’s plan, districts in Alachua, Brevard, Broward, Duval, Hillsborough, Indian River, Leon, Miami-Dade, Orange, Palm Beach, Sarasota and Volusia counties would have been ineligible for the money because they had mask requirements..

But DeSantis in his letter to Diaz said that a "plain reading" of state law related to the recognition program required that districts’ actions can’t be held against individual schools. Diaz, a former Republican lawmaker, became commissioner on Wednesday.

"Compliance with law by the schools, and not the districts, drive the allocation of funds for the program. At most, districts are a pass through, as districts have no lawful means to spend these funds," DeSantis wrote. "My approval and your subsequent implementation of this funding must rely on the plain language that districts’ actions do not impact schools’ eligibility."

DeSantis went on to write that Florida teachers "did an admirable job under unprecedented circumstances" by teaching during the pandemic, as Florida reopened schools earlier than other states.

"Accordingly, as governor, I direct the Department of Education to implement the Florida School Recognition Program consistent with this reading of the language, which is to reward eligible schools for their achievements, as districts’ actions have no bearing on a school’s eligibility," the governor concluded.

Florida has had a recognition program for more than two decades, with it used to reward schools that showed academic improvement.

But this year’s plan to reward schools financially for following the governor’s lead on masks generated controversy.

An earlier version of the plan pushed by House PreK-12 Appropriations Chairman Randy Fine, R-Brevard County, would have involved shifting $200 million away from the 12 districts that had mask requirements.

Fine initially appeared to be under the impression Thursday that the school-recognition plan had been put into effect when DeSantis signed the overall budget.

"BREAKING: The reckoning has arrived. (DeSantis) just signed our historic K12 budget, including a $200M reward for the 55 school districts who obeyed state law and did not force mask children, largely paid by cuts from the 12 that did, including $6M cut from (Brevard school district)," Fine tweeted, before deleting the post.