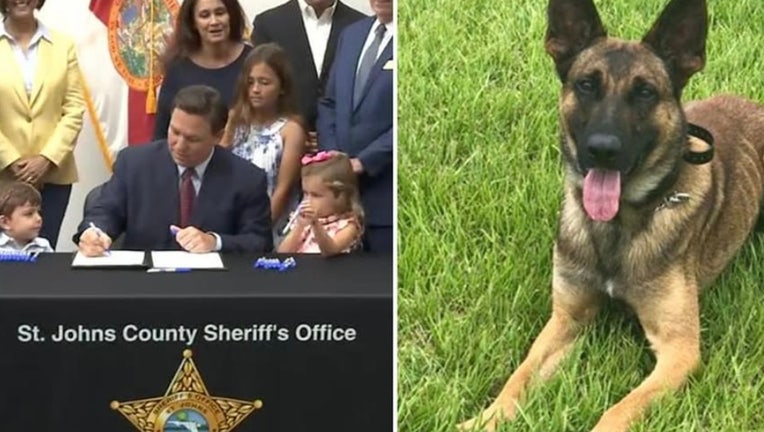 The governor held a news conference in St. Augustine.

"In some cases, they are the first to put their lives on the line," DeSantis said of K-9's on Friday.

The previous law prohibited emergency workers from rendering aid to police K-9's if they are injured in the line of duty.

According to SB 388, EMTs are now allowed to give care to K-9's at the scene and transport them for emergency care the same way they would for an injured human officer.

The bill is sponsored by Republican Senator Tom Wright.

"In recent years we have had multiple K-9s assassinated in our state just because they were wearing a badge," Wright said in a March committee meeting. "This bill is intended to take a proactive approach to save the lives of these officers."

A 19-year-old pleaded guilty in December to killing a Florida police dog named Fang as the dog pursued him during a chase.

Officer Matt Herrera described a 120-mph chase down Interstate 10 and how he released Fang to stop the suspect. Herrera said he heard his 3-year-old dog yelp after the first shot, before seeing Fang lifeless with head and chest wounds.

"He’s still a member of my family and it wasn’t just sad for me, but for the department," the officer said.