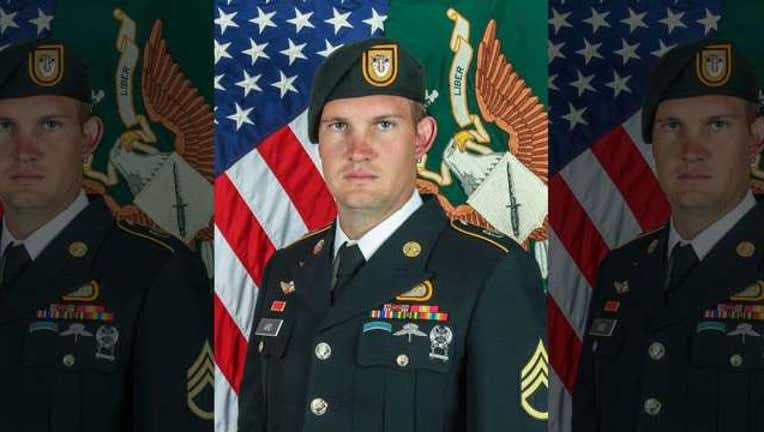 (FOX NEWS) - The identity of the third American soldier to die in Afghanistan in under two weeks was disclosed Friday — a day after President Trump confirmed a plan to withdraw at least some troops from the South-Central Asian nation once U.S. forces are assured the country will not become a haven for other terrorist groups.

Sgt. 1st Class Dustin Ard, a Green Beret from Idaho, died in Afghanistan’s Zabul Province on Thursday. He is survived by his wife, who is pregnant, as well as a young daughter. He would have turned 32 in October, the Washington Examiner reported.

Ard joined the Army in 2011 as a Special Forces candidate through the 18X program, Bymer said. Ard was assigned to Fort Bragg in North Carolina. He went through Special Forces Assessment and Selection and graduated from the Special Forces Qualification Course in 2015.

Ard is the third U.S. service member to die in Afghanistan in less than two weeks. He died after disembarking a helicopter at the start of a joint mission between U.S. Army Special Forces and Afghan commandos Thursday, the New York Times first reported. The U.S. State Department did not provide any further explanation of how the soldier was killed.

He was the 15th U.S. soldier to die in Afghanistan this year -- making 2019 the deadliest for U.S. troops in Afghanistan since 2014, when the combat mission Operation Enduring Freedom formally ended, according to the Washington Examiner.

Idaho state Rep. Rod Furniss announced Ard’s death in a Facebook post Friday. The post included a photo of the late soldier in uniform, posing alongside family members, as well as a quote from his father, Bruce Ard. His father is also the former mayor of the town of Ammon, Idaho.

"We received news that we lost our son Dustin in Afghanistan. My heart has a hole so big I can hardly stand it. He was the finest young man I have ever known. Not because he was my son but because if the person he is,” Bruce Ard said in the Facebook post.

“A great son, brother, father and husband. He loved his country and was the kind of person we should all be. Son, I Love you and know we will see each other again. I will miss you every day I live without you. Love Dad," the post said.

President Trump told Fox News Radio on Thursday that negotiators were working on a drawdown from 14,000 U.S. troops in Afghanistan to about 8,600, but offered assurances that the U.S. would keep a “presence” in the country.

The U.S. and the Taliban are negotiating a deal in which U.S. forces would withdraw in exchange for guarantees that Afghanistan would not become a haven for other terrorist groups.

In 2017, Trump ordered 4,000 additional troops be sent to Afghanistan to help Afghan forces and conduct counterterrorism operations against the ISIS terror network’s Afghan affiliate and other extremist groups, including Al Qaeda. Some 14,000 U.S. troops remain in Afghanistan.