Protesters tore down a statue of Christopher Columbus outside the Minnesota State Capitol on June 10, 2020.

ST. PAUL, Minn. (FOX 9) - A group has made good on its promise to tear down the statue of Christopher Columbus standing on the Minnesota State Capitol grounds.

Speaking earlier in the day, Minnesota Department of Public Safety Commissioner John Harrington said troopers would try to speak with a group that wants to tear down a statue of Christopher Columbus on the state capitol grounds.

A crowd pulled the Christopher Columbus statue to the ground outside the Minnesota State Capitol during a FOX 9 broadcast on June 10, 2020.

But, at 5 p.m., the group tossed a rope around the statue and tugged it to the ground. Members of the crowd then danced and spit on the statue.

Columbus statues have been torn down or damaged by protesters in cities across the United States in the unrest that followed George Floyd's killing including in Boston where a statue was beheaded. 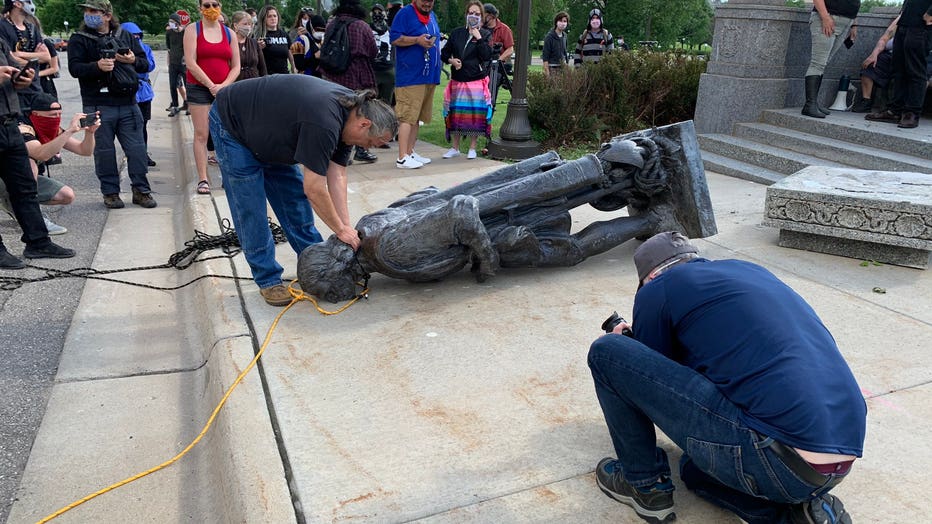 Christopher Columbus statue is taken down outside the Minnesota State Capitol.

Once a widely celebrated explorer credited with "discovering America," Columbus' legacy has grown controversial as more attention has been paid to the atrocities Columbus and his followers committed after coming to America.

Speaking Wednesday, Governor Walz said he understands the impact that the symbolism of the statue can have on people

"I hear it get pushed off as 'frivolous' or 'political correctness,'" he said. "These are historical pains that led to what we saw happen with George Floyd and the anger that came out."

Mike Forcia with the American Indian Movement, a Native American advocacy group that organized the rally at the state capitol on Wednesday, said it's time for the statue to go.

"I spoke with Peggie and Tim several months ago," explained Forcia. "This has been an ongoing conversation that we've been having for years with people who occupy this building [referencing the capitol]. It's always 'you got to wait; there's a process you got to go through.'"

Forcia says Governor Walz has shown some support for removing the statue but wanted to go through the proper process. Forcia says the group is tired of being stonewalled and is now taking matters into their own hands. 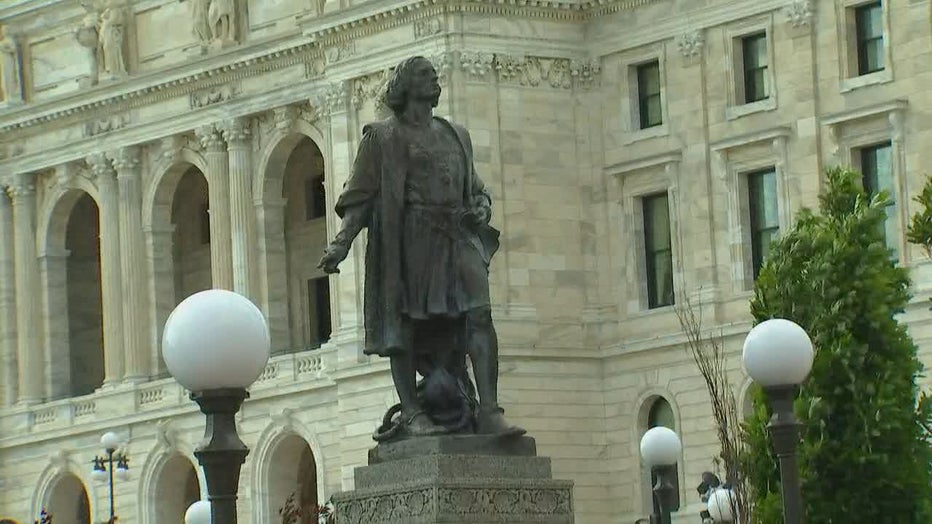 "I said I can have a group of guys down here and we can have it down in a half hour," Forcia recalled. "[They said] 'No you can't do it that way, that's not the way we want to do it.' So I figured, okay, we'll do it your way."

But, Forcia said Wednesday that "the time for being complacent is over."

Forcia says he wants to see the statue replaced with another statue as decided on by the Dakota People. The Columbus sculpture had stood on the capitol ground since 1931.

After it was torn down, troopers did move in around the pedestal before Forcia asked the crowd to move away so the state could remove the statue. With the help of a tow truck, the statue was removed from the area.

Forcia says, at that point, he was told by Minnesota State Patrol that he would be charged with criminal damage to property.

“I wear it as a badge of honor. I’m happy we did it. No regrets whatsoever,” Forcia said in response.

Wednesday night, Gov. Tim Walz said he used to teach his students that many Minnesotans see the Columbus statue as a "legacy of genocide," and said it is time to take a "hard look at the dated symbols and injustices around us."

However, Walz says the removal of the statue was wrong in that protesters could have gone through the formal process.

"Even in pain, we must work together to make change, lawfully," he said. "I encourage Minnesotans to have productive, peaceful conversations about the changes that need to be made to create a more inclusive state."