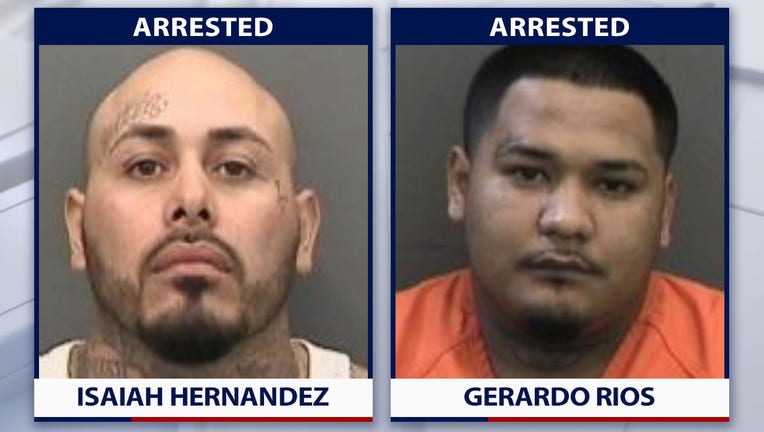 RUSKIN, Fla. - Isaiah Hernandez, 30, Gerardo Rios, 20, and a 17-year-old male were arrested following an overnight shooting and robbery in Ruskin, according to the Hillsborough County Sheriff’s Office.

Deputies say they responded to a home on the 500 block of 7th Avenue NE in Ruskin after they say two people who lived there robbed someone they knew inside the home and struck the victim several times. The victim was able to get away and call HCSO.

When deputies arrived, they say they heard several shots fired in their direction from the property. According to HCSO, the deputies immediately took cover, announced themselves and demanded the suspects come out of the home.

Rios and the 17-year-old exited the home without incident, according to HCSO.

Deputies said they found an AR-15 style rifle, a 40mm pistol and marijuana inside the home. Bullet holes were later discovered in a mailbox post. No deputies were injured during the incident.

Rios was charged with six counts of aggravated assault on a law enforcement officer with a deadly weapon, possession of marijuana with intent to distribute, possession of drug paraphernalia and violation of probation.

The 17-year-old was charged with six counts of aggravated assault on a law enforcement officer with a deadly weapon, robbery with a firearm and petit theft.

According to HCSO, Hernandez was involved in the initial robbery but left the home before the shooting incident. He was arrested Thursday during a traffic stop.

Hernandez faces charges of robbery with a firearm, felon in possession of a firearm and petit theft.

“The life of crime these individuals were living caught up to them last night when our deputies showed up at their door,” said Sheriff Chad Chronister. “I am thankful that none of our deputies were hurt after being shot at by these dangerous individuals who have now been taken off of our streets.”