TAMPA, Fla. - Like other news outlets, we are receiving claims people registered for COVID-19 tests, but did not wait to be tested, then got notice that they tested positive. The governor is hearing those claims as well.

“If people that have told you that are willing to provide their name, we’re interested in investigating this because it’s ridiculous,” Gov. Ron DeSantis said this week in response to a question on the topic.

“Ridiculous” can mean unwise or untrue -- and at this point, we cannot nail down which definition applies. We have not yet independently verified these claims, and the messages we’re receiving are generally something heard from a friend or friend of a friend.

Likewise, we also weren’t able to verify claims that college students were throwing COVID parties to deliberately get infected with cash prizes for whoever tests positive first. That one spread from politicians citing rumors, to news reports citing politicians quoting news reports, but did not substantiate as fact.

So we cannot confirm the claims that people are testing positive without getting tested, nor can we confirm that they are as prevalent as some social media posts suggest. 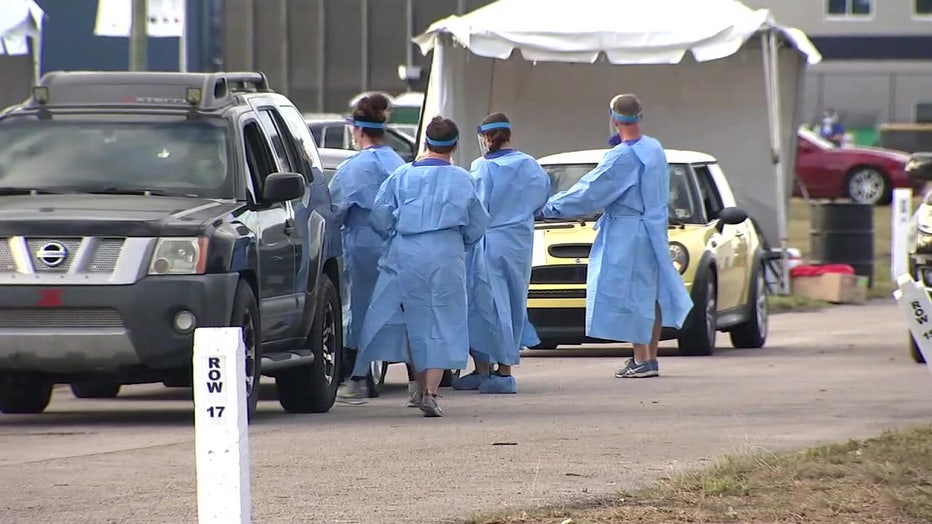 That said, given the potential for error and other errors we’ve already found in state test results, the claims are concerning and merit investigation.

Health experts say the way the testing system is set up, this type of error can occur -- almost like a mix-up in a fast-food drive-thru.

According to accounts, people signed up. They got in line, then bailed out because they got tired of waiting. When that happens at the restaurant drive-thru, somebody else may get your bag of food.

In this case, USF health professor Dr. Jay Wolfson says, you could get somebody else’s test results.

“It’s a moving system and if you miss something. It’s not mechanized and lots of hands are touching the test kits and the pads and the boxes they go in, so there’s room for error,” he explained.

Inside a COVID-19 testing site

FOX 13's Jennifer Holton spent a day at a testing site to see what the volunteers face as they battle the elements while trying to stay safe.

Wolfson says if that’s the case, they would likely catch the error quickly, so it would only affect a small number of people.

“I leave the line, so Robert is behind me. So Robert at least temporarily gets reclassified perhaps as number 15 and they mistakenly put your name in that slot and they probably figure it out after one or two and say, ‘We got it wrong, we think we did.’ So they catch up,” Dr. Wolsfon continued. “But one or two people wind up getting somebody else’s test results.”

Anyone with firsthand knowledge of this type of error should contact the state, but FOX 13 would also like to hear from you: fox13tampanews@foxtv.com