BROOKSVILLE, Fla. - A married couple was arrested and accused of stealing $1.5 million intended for the Humane Society of the Nature Coast, but, according to the sheriff, the non-profit may not be the wife's first victim.

The sheriff said the case was first brought to the sheriff's office's attention at the end of January. He explained that Arneson started working with the local Humane Society in November 2018 as the non-profit's director, and described her as the "mastermind" of the money laundering operation.

He said over the course of her time with the agency – including after – Arneson and O'Berry purchased boats, vehicles, and businesses, including the locally-popular Precision Tackle on Commercial Way. 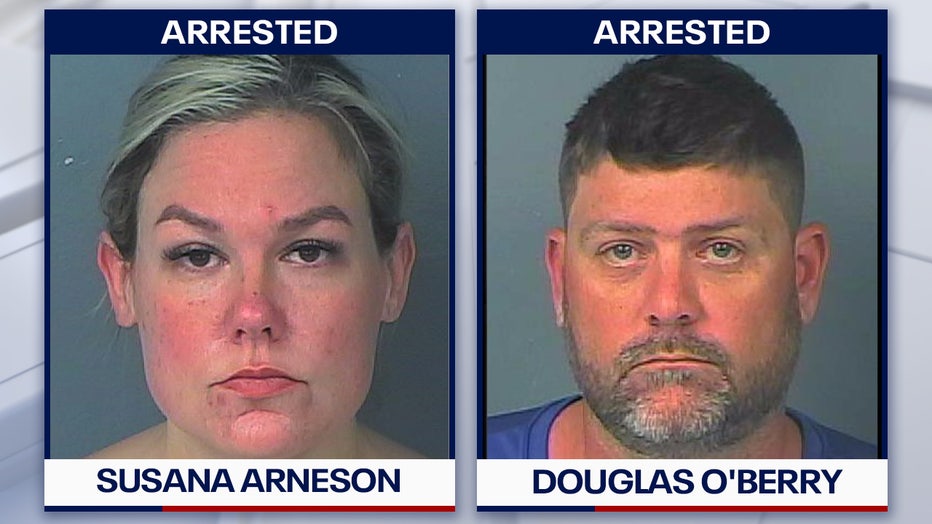 Nienhuis also said Arneson also dramatically changed her appearance during the past few years, and that the public can draw their own conclusions. He added that she had also spent money on international travel that "may or may not have been related to her change in appearance."

"It was a very interesting case. She was able to take money and divert it into an account in order to make these purchases," the sheriff said. "It was definitely something she did intentionally."

The Hernando County Sheriff's Office detailed the arrests of two people accused of laundering money from the Humane Society of the Nature Coast.

Sheriff Nienhuis described her actions as "ironic," considering she spoke to local news outlets, including FOX 13, about a burglary that occurred at the Humane Society in 2020. The burglary suspects stole everything from pet food, generators, cleaning supplies, lawn equipment, and even toilet paper. At the time, the shelter was left with barely a week's worth of food for over a hundred animals.

PREVIOUS: After nearly all supplies stolen from Humane Society in Hernando County, community steps in with donations

In interviews, Arneson described the burglars as "heartless" – giving inspiration to the name of the current investigation that led to her arrest: Operation Heartless, the sheriff said.

From 2020: Thieves take anything they can grab from Humane Society

"We found at the time of…the burglary she had already funneled over $300,000 into her personal account," Sheriff Nienhuis explained Thursday, "and was able to make several purchases for personal items…so a total of $1.5 million over the last few years."

Five days after the burglary, Arneson and O'Berry, who were not married yet, purchased a home for $220,000 with no mortgage, the sheriff said, adding that there is no indication the couple was involved in the burglary.

During the investigation, detectives learned the IRS filed liens against Arneson in the 2012-2013 tax years for $400,000.

"Which means in those two years, she made a tremendous amount of money," the sheriff said, adding that they are still trying to determine whether her income was legal or illegal. If it's the latter, "The Humane Society may not be the first victim."

Nienhuis said Arneson left the Humane Society in August 2021, but was still able to "manipulate" money after she left. He said they purchased vehicles and vessels have since been seized. Detectives are still scouring through documents and evidence.

The non-profit said they will release a statement in the coming days.

For information about adoptable pets at the Humane Society of the Nature Coast, or to make a donation, visit https://humanerescue.org/.