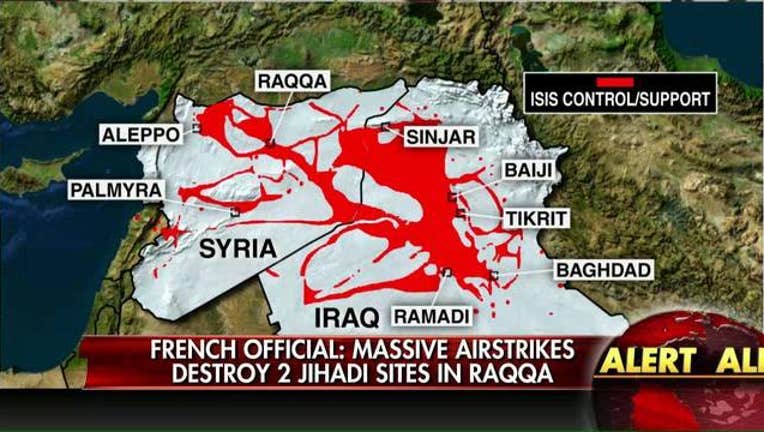 NEW YORK (AP) — The Islamic State group on Saturday expressed fury at France's recently launched airstrikes against it in Syria as it claimed responsibility for Friday's attacks in Paris. The airstrikes have hit training camps and reflect France's fears that hundreds of French fighters in Syria and Iraq could return home and, as President Francois Hollande put it last month, "plant bombs in our country."

Many details about Friday's attacks remain unclear, including how long the coordinated assault had been planned.

Here is a look at recent French action in Syria:

The Paris attack comes less than a week after France's military said a French airstrike had targeted an oil distribution center in Syria controlled by Islamic State militants in an attempt to cut a crucial source of the group's funding.

"The stench of death will not leave their noses as long as they remain at the forefront of the Crusaders' campaign, dare to curse our prophet, boast of a war on Islam in France, and strike Muslims in the lands of the caliphate with warplanes," the statement said.

France joined the U.S.-led coalition against the Islamic State group in Iraq last year and expanded its campaign to Syria in late September, starting with a five-hour attack by jet fighters on a training camp in the eastern part of the country.

In announcing the strikes on Sept. 27, Hollande told reporters that the strikes, and others to come, were aimed at "protecting our territory, cutting short terrorist actions, acting in legitimate defense."

Also this month, Hollande announced that France will deploy an aircraft carrier in the Persian Gulf to assist in the fight against the Islamic State group in both Iraq and Syria.

He didn't say when the carrier, which will boost the air power of the U.S.-led coalition conducting airstrikes, will leave the French Mediterranean port of Toulon.

France already has 12 jet fighters based in the United Arab Emirates and Jordan involved in the operations. Two of the Jordan-based jets carried out the Nov. 8 strike against the oil distribution center controlled by the Islamic State group near Deir ez-Zor, in eastern Syria.

The French government has insisted that while it is part of the U.S.-led coalition, France is deciding independently who and what to hit in Syria.

In an interview last month with French broadcaster RTL, Hollande acknowledged French airstrikes on other Islamic State camps in Raqqa, the capital of IS' self-proclaimed caliphate, and elsewhere in Syria, saying "there are terrorists training to lead the fight in Syria but can also plant bombs in our country."

He repeated his government's estimate that there are 600 French nationals in the "combat zones" in Syria and Iraq who could return to France with the potential to carry out attacks at home.

Until launching the airstrike campaign, France had held back on engaging in Syria, citing concern over playing into Syrian President Bashar Assad's hand and the need for such action to be covered by international law.

But Hollande on Sept. 7 announced France's intention to start airstrikes in Syria, days after the photo of a dead 3-year-old Syrian boy on a Turkish beach galvanized concern about Syrian refugees fleeing to save their lives.

In addition to the military moves, France has remained insistent that Assad must go — a stronger stance than that of the United States, which recently has tamped down demands for Assad's quick departure.