Woman accused of stealing more than $1M from church

WINTER HAVEN, Fla. - Over the last five years, a Polk County woman pocketed over $768,000 from a Winter Haven church, and used the money during trips to theme parks, for Amazon purchases and a Match.com account, the sheriff announced.

Early Wednesday morning, Polk County detectives arrested 62-year-old Sharon Bradley, who served as the finance secretary for Calvary Baptist Church for 11 years. During the last five years in her role, they said she stole $768,000 -- and possibly more prior to that.

Polk County Sheriff Grady Judd said their investigation began when a retired detective, who is the head deacon at the church, was helping an interim minister transition into the new role.

The former detective was working on securing the finance books and asked Bradley to see the church's bank statements. Judd said he wasn't receiving the information, and quickly became more persistent. 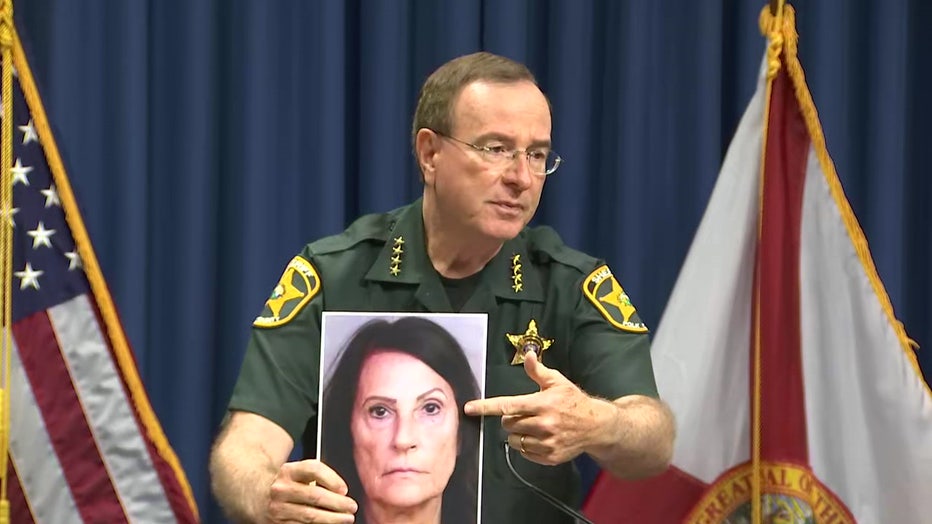 Sheriff Grady Judd didn't mince words during a Wednesday press conference, saying the suspect stole from a church that could've used hundreds of thousands of dollars to help the community. (FOX 13 News)

Judd said Bradley sent the deacon a screenshot of one page. On the bottom corner, he noticed a line of credit for $225,000 connected to a bank account that didn't belong to the church.

After that, he contacted his former colleagues at the sheriff's office.

"When I think about what's great about this community and this state," Judd said during a press conference, "I think one of the great things are our churches and all of the people that go and the people that give up their money so that all the different faiths can be advanced and people can be helped in the community that need help -- and that's a good thing."

"Then there's this lady," he added, "Sharon Bradley."

The sheriff said they haven't completed their investigation, but believe she stole from the church during her 11 years as the finance secretary.

Detectives said they discovered the following:

In mid-2015, payments from CBC accounts began going to Bradley's Capital One credit card account in May for a total of $19,673.74

Checks from CBC accounts were deposited into Sharon Bradley’s account for $21,278.69

Cash deposits from cash payments to Calvary preschool between 2016 and 2020 amounting to $89,017.00 were deposited into her accounts

Supporting records maintained by Sharon Bradley confirm cash payments in 2018, 2019, and 2020 that did not get deposited into the CBC accounts

On 11-28-2019, a transfer from the CBC account to Sharon Bradley’s personal MFCU account totaling $3,000.00 - both transfers were payments for new pool at her home

In 2015, $15,135.96 in unauthorized purchases for clothing and beauty supplies and QVC products

In 2018, $3,084.93 in unauthorized purchases to Amazon, medical expenses, and entertainment

While Bradley was in her church role, she got a divorce, married someone who did the lawn maintenance at the church, and got divorced again, the sheriff said.

The detectives also interviewed the finance committee members, who admitted they noticed irregularities. However, when they brought those irregularites to Bradley's attention, they said she rectified it.

"For 11 years she was in a finance secretary position, and the finance committee thought she was an honest lady and just a bad bookkeeper," Judd explained. "Why would you have a bad bookeeper in charge of the money at your church?"

When Bradley learned there was an audit being performed, Judd said she quit her role at the church, and left the church with a $190,000 debt.

He said if she bonds out of jail, detectives will push for a GPS ankle monitor, since more charges could be coming her way.

"I expected her to at least say, 'the devil made me do it.' Because it was an evil thing that she was doing," the sheriff said. "We'll deal with her doing the criminal justice system and the lord will deal with her later."

Judd said he feels bad for the widows and elderly who were providing money to the church, only to have Bradley "suck the money off the back end of her personal gain," when that money could have been used to help the community.

The sheriff's full press conference can be viewed below: