President Joe Biden traveled to the tornado-ravaged state of Kentucky to survey damage from last week’s deadly storms and offer federal support for the victims.

MAYFIELD, Ky. - A Kentucky man suffered a fatal heart attack while cleaning up storm debris at his daughter's home, authorities said as the death toll edged upward from a recent tornado outbreak across multiple U.S. states.

Services for Terry Martin Jayne, 67, were scheduled Wednesday in his hometown of Russellville. Warren County coroner Kevin Kirby said Jayne suffered the heart attack Saturday and was taken to an emergency room where he was pronounced dead.

Jayne had been helping clean up debris at his daughter's home in Bowling Green, where officials said 14 others were killed by a tornado, including 11 people on one street.

According to his obituary, Jayne had operated a floral shop for 45 years. He is survived by his wife, a son and daughter, three grandchildren and four siblings.

"He was, as he always was, helping someone else," Jayne's brother, Bruce Russell-Jayne of Carmel, Indiana, wrote on Facebook. "Rest in Peace my ‘Little Brother.’ We are in shock and can’t believe you are gone." 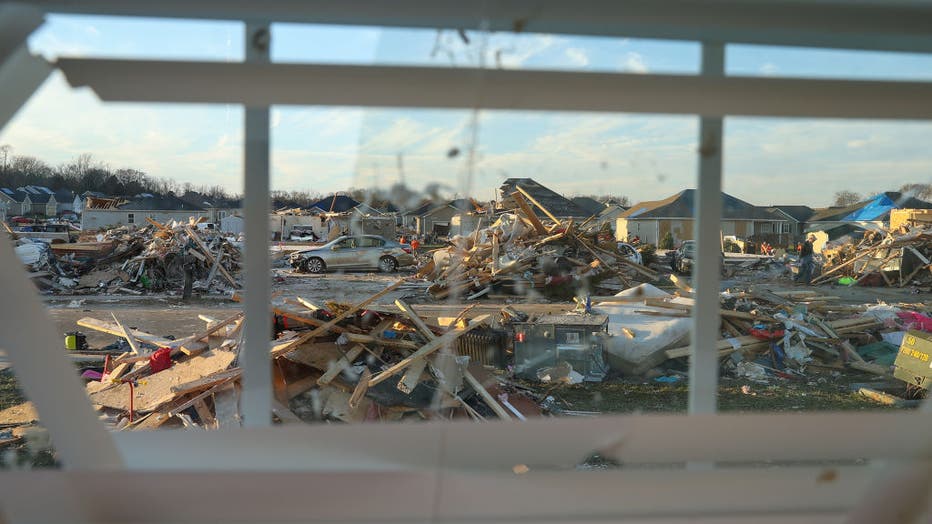 A photo shows damage caused by tornadoes in Bowling Green, Kentucky, in a file image taken on on Dec. 15, 2021. (Photo by Tayfun Coskun/Anadolu Agency via Getty Images)

Jayne’s death pushed the total of storm-related casualties in five states to 89, including 75 in Kentucky.

The National Weather Service continued to assess the scope of the storm. Eight states recorded at least 41 tornadoes during the severe weather that occurred on Dec. 10 and 11, including 16 in Tennessee and eight in Kentucky.

On Wednesday, the weather service said the tornado that tracked across a wide swath of western Kentucky, from Fulton to Muhlenberg counties, was preliminarily classified as an EF4, with peak estimated winds of 190 mph (305 kph).

The most significant damage occurred in Arkansas, Tennessee, Missouri and Kentucky, where President Joe Biden visited on Wednesday to comfort those who suffered grievous losses in the storms.

In Kentucky, Lacedric Richardson and his two daughters stopped by to pick up some necessities at Mayfield High School, where the gymnasium was packed with food, clothes, toiletries and other supplies.

Richardson, 36, said he was scheduled to be at work Friday at the candle factory where eight of his co-workers were killed, but happened to be out sick.

The candle company announced this week that it will give each employee $1,000 to help with expenses and perform an independent review of its emergency protocols. The state is also investigating the factory deaths.