The off-year elections for governor in Virginia and New Jersey tend to receive outsize attention, and the results are mined for deeper meaning about what they portend for the midterm elections the following year that determine which party controls Congress.

Here are some key takeaways from Tuesday's elections:

Democrats’ worst fears are that they’re on course for a 2010-like drubbing in next year's midterm elections and that they can’t use the specter of former President Donald Trump to stop it.

Those fears got a lot stronger after Republican Glenn Youngkin won the governor's race in Virginia.

President Joe Biden won Virginia by 10 percentage points just a year ago, and if Democrats cannot generate more enthusiasm than their gubernatorial candidate Terry McAuliffe did, they’ll likely be swept out of power in Congress.

In Virginia, governors are limited to a single term and elections are held in odd-numbered years, making it the go-to gauge of voter sentiment before midterms. It usually is a warning for the party in power in Washington and this year was no different.

McAuliffe, elected Virginia governor in 2013, was unable to excite voters amid significant headwinds facing Democrats, including Biden’s drooping poll numbers, the congressional stalemate over the president’s economic agenda and the persistence of the pandemic.

Diversifying states with a large share of college graduates like Virginia have been an unsolvable puzzle for the GOP during the political era dominated by former President Donald Trump. But Youngkin seems to have cracked the code.

A former private equity executive, Youngkin presented himself as a non-threatening suburban dad in a fleece vest. He embraced Trump just enough to win the GOP primary and rev up the party base, but was also able to target more moderate voters by talking about fiscal management and investing in schools and campaigning without the former president at his side. 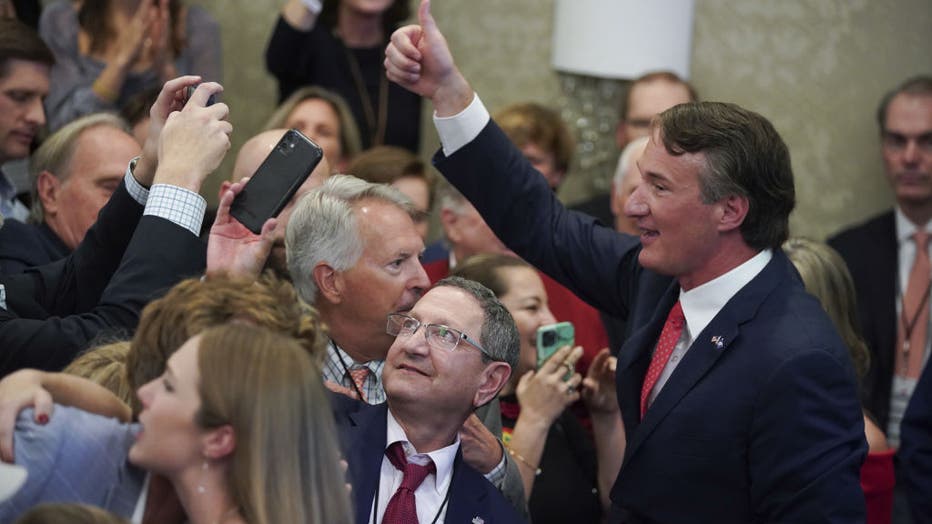 Youngkin's arm's-length approach to Trump didn’t seem to hurt him with GOP voters. Most Youngkin voters — about 8 in 10 — said the candidate supports Trump the right amount. About 1 in 10 said he supports the former president too much, and about that many said Youngkin supports Trump too little.

Look for more Republicans next year try to model themselves after Youngkin in swing areas — refusing to disavow Trump but not hugging him too closely, and tailoring their messages to both the former president’s most hardcore voters and persuadable suburbanites.

Youngkin’s signature issue was an unexpected one — education. He prevailed on the issue by both pledging to boost education funding and hammering public schools on hot-button social issues like race and transgender rights.

He said he would ban the teaching of critical race theory in Virginia classrooms even though it is not a part of the secondary school curriculum.

Critical race theory is an academic framework that centers on the idea that racism is systemic in the nation’s institutions and that they function to maintain the dominance of white people. In recent months, it has become a catch-all political buzzword for any teaching in schools about race and American history.

The focus comes after lengthy school closures during the pandemic infuriated some traditionally Democratic voting groups and conservatives targeted school board races nationwide over masking rules and teaching racial justice issues. In Virginia, 14% of voters listed education as a top issue, and about 7 of 10 of those voted for Youngkin.

McAuliffe didn’t help himself when, during a debate, he said, "I don’t believe parents should be telling schools what they should teach," providing Youngkin a pivotal opening to hammer his opponent.

Democrats took control of all parts of Virginia’s government in 2019 and steadily started liberalizing the state’s voting laws. They made mail voting accessible to all and required a 45-day window for early voting, among the longest in the country. This year they passed a voting rights act that made it easier to sue for blocking ballot access.

Trump in 2020 attacked efforts to expand ballot access during the pandemic, spreading baseless claims of fraud.

The other big governor’s race Tuesday was in New Jersey. Democratic Gov. Phil Murphy was favored in his race against Republican Jack Ciattarelli, but the race was too early to call Wednesday morning.

Democrats were looking to the Garden State for hopeful signs, but were quickly disappointed as what should have been a relatively easy race turned into a nail-biter.

Murphy has been able to deliver on many liberal priorities, like expanding government funding for widespread prekindergarten and community college, and has the advantage of incumbency that McAuliffe lacks. As such, he may offer more of a model of the position Democrats could be in next year should they manage to pass Biden’s agenda. He also avoided McAuliffe's errors on education.

Still, the race remained tight well after midnight in a state Biden won by 16 percentage points, another sign of the grim national environment for the Democrats.

It’s still 12 months before Election Day 2022. While Tuesday’s results hold some clues as to what might happen, they are merely clues.

The two biggest drags on Democrats currently are the persistence of the coronavirus pandemic and supply chain problems that have pushed up prices. Both could improve over the next 12 months, potentially bolstering the incumbent party -- or they could worsen.

The U.S. Supreme Court is scheduled to issue an opinion on an abortion case next June that will determine whether the conservative majority upholds or overturns Roe v. Wade, the landmark case that affirmed abortion rights.

That could make debates over masking and racial justice lessons in schools seem like quaint relics of Election Day 2021.

So dig into the results of tonight, but they are in no way definitive. A lot can happen in the next year, and probably will.