TALLAHASSEE, Fla. - After a walkout by Democrats who said they weren’t getting answers, a Florida Senate committee Wednesday signed off on the confirmation of controversial state Surgeon General Joseph Ladapo.

Democrats peppered Ladapo with questions about issues such as his views on COVID-19 vaccinations and wearing masks, before Minority Leader Lauren Book, D-Plantation, announced that Democrats on the Health Policy Committee would not vote on the confirmation.

"We don’t feel that we are getting any answers met," Book said. "We know that there is a long agenda today with a lot of bills. So the Florida Senate Democrats in this committee now are going to abstain, walk out and come back when we have more business to attend to."

Republicans then voted unanimously to back Ladapo’s confirmation, which ultimately needs approval from the full Senate. After the vote, Ladapo told reporters that he thought he responded to the questions raised by lawmakers.

"I feel that I answered them as accurately as possible," he said. 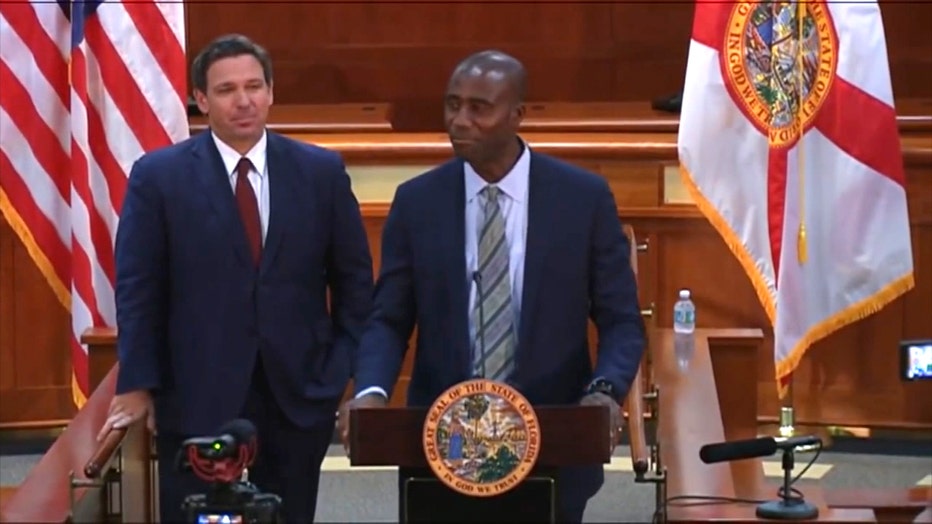 RELATED: DeSantis would have been 'much louder' if he knew early on feds would shut down the country

Ladapo has been a controversial figure since Gov. Ron DeSantis appointed him in September as surgeon general, a position that doubles as secretary of the Florida Department of Health. Much of the controversy has centered on Ladapo’s views — which largely mirror DeSantis’ views — on handling the COVID-19 pandemic, including rejecting vaccination and mask requirements.

Democrats repeatedly expressed frustration during Wednesday’s hearing about Ladapo’s answers to questions about issues such as whether he thinks vaccines are effective in fighting COVID-19.

"Do you believe vaccines work?" Book asked at one point.

"I consider vaccines in the same way that I consider other medical therapies. What we care about clinically is whether they are safe and effective, and that is the lens through which I evaluate all medical therapies," Ladapo responded.

"Do you believe that vaccines in fighting against a pandemic like COVID-19 are effective?" Book pressed.

After further questioning by Book, Ladapo said COVID-19 vaccines from the drug companies Pfizer and Moderna have been shown to have "relatively high effectiveness" in preventing hospitalization and death and relatively low protection against infection.

Speaking to reporters after the meeting, Ladapo said, "They (vaccines) reduce the risk of hospitalization and death from COVID-19, and I stated some other things related to it. I don’t think the objective of public health is coercion. I think it’s education, and I think it’s to allow people to make choices, so they don’t feel coerced."

Ladapo also will need approval from the Senate Ethics and Elections Committee before he could go to the full Senate for a confirmation vote.

A son of immigrants from Nigeria, Ladapo graduated from medical school at Harvard and was a physician and researcher at UCLA before being appointed by DeSantis. He also is a professor at the University of Florida through what is known as an intergovernmental agreement.

Sen. Aaron Bean, R-Fernandina Beach, prompted Ladapo to disclose that he is paid $430,000 to $440,000 a year in the combined roles. Bean said Ladapo could make at least double that amount of money in the private market.

"I’m doing this because of my deep commitment to helping other people improve their health and reduce their suffering from chronic disease," Ladapo said.

Ladapo has become a national figure during the COVID-19 pandemic drawing praise from conservatives and showing up in media outlets such as The Wall Street Journal.

But along with that praise has come from disdain from Democrats, which was on display as Ladapo faced questions during Wednesday’s meeting.

"I expect to be respected, and I don’t feel like I am hearing that from you," Sen. Janet Cruz, D-Tampa, said to Ladapo. "What I am hearing is arrogance and polite avoidance. So, if you wouldn’t mind with all of this rhetoric that you are applying, could we just get straight answers?"