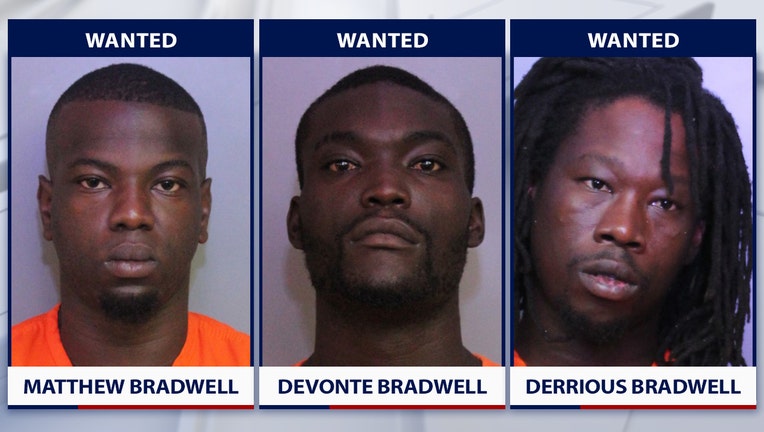 LAKE WALES, Fla. - The Lake Wales Police Department is searching for Derrious Bradwell, 30, of Lakes Wales, Matthew Bradwell, 25, of Bartow and Devonte Bradwell, 24, of Winter Haven after they say the three men were involved in two shootings on Thursday.

According to the Lake Wales Police Department, officers were called to investigate reports of shots fired at 224 C St. in Lake Wales around 8:40 p.m.

Police say vehicles were leaving the area when they arrived and officers talked to a few bystanders. Bystanders told officers they heard the shots being fired and police found numerous empty shell casings on Lincoln Ave near C St.

No victims were located and no information was received about anyone being shot. While officers were still on this scene conducting their investigation a second call about shots fired came in.

According to investigators, neighbors reported hearing shots fired but did not see who did it. There was no report of anyone being shot at this location.

Detectives say based on facts and evidence, they obtained arrested warrants for all three men for attempted first-degree murder. Police say the men should be considered armed and dangerous.

A fourth person is known to have been involved and detectives are still working to get that person identified.

The shootings are still under investigation.