Non-profits giving back to Tampa Bay

LARGO, Fla. - Staffers with Habitat for Humanity of Pinellas and West Pasco Counties won't be reporting into their regular offices or ReStore locations on the day before Thanksgiving.

Instead, they'll volunteer their time, working with local nonprofit Feeding Tampa Bay to provide meals to 120 residents in Largo's Dansville neighborhood. As part of Habitat's 'Give Back Day,' volunteers will also spend their day working on beautification projects in the neighborhood, including landscaping and trash pickup. The improvement materials are donated by Lowe's.

2020 marks the fifth year that Habitat's Pinellas and West Pasco Counties chapter has participated in Give Back Day. Since 2016, volunteers have completed more than four dozen new homes in the Greater New Ridgecrest Area. More than half are in the Dansville community.

Dansville can be found north of where Ulmerton Road curves into Walsingham Road within the Greater Ridgecrest Area in Largo. It is home to “Dan” Henry’s direct descendants, distant cousins and others without lineage who called him Uncle Dan anyway.

Today, Dansville is 68 acres, dotted with about 70 one-story houses, a couple of businesses and swaths of vacant land that have not gone unnoticed by officials in one of Florida’s most densely populated counties.

RELATED: Thanksgiving could make or break US COVID-19 response

According to Habitat Pinellas and West Pasco, Pinellas has spent 25 years and millions of dollars building infrastructure, purchasing land and planning for new housing and much longed-for amenities. Since 2016, Habitat Pinellas and West Pasco has invested over $9 million. The development work in this area has been a catalyst for positive change in an otherwise neglected area. In February 2020, the affiliate celebrated its 600th home milestone in the heart of Ridgecrest.

“The Greater Ridgecrest Area continues to see transformational change and is a prime example of what can be accomplished with public-private partnerships. Pinellas County has made significant investments that have paved the way for organizations like Habitat for Humanity to do improve the lives of families by building over 50 homes in the area,” said Pinellas County Administrator Barry Burton.

“This is what community is all about," she said. "Habitat has been able to make the dream of homeownership for over 50 families in the Greater Ridgecrest Area through a partnership with Pinellas County. These are the types of investments and outcomes the Board of County Commission wants to see." 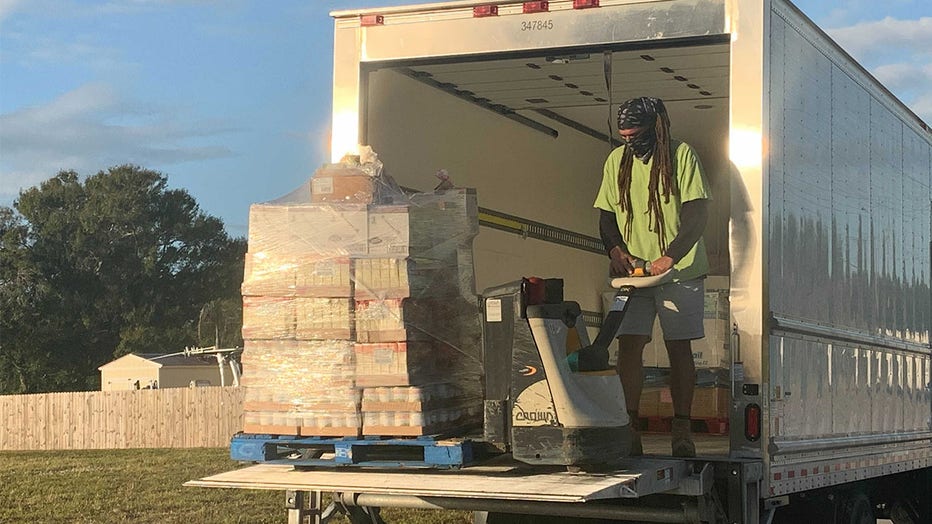 In a news release from Habitat, CEO Mike Sutton said the affiliate remains committed to supporting the community by providing affordable homeownership opportunities to its residents.
"The neighborhood has been so welcoming to Habitat, and we are looking forward to supporting Dansville residents in the spirit of Thanksgiving with our partners at Feeding Tampa Bay," he said.

A Habitat spokesperson explained that amid record unemployment and the continued public health crisis caused by the coronavirus, having a safe and affordable home and healthy food are critical elements that too many community members don't have access to.

"A partnership with Feeding Tampa Bay, one of the nation’s top hunger relief organizations, was a natural fit for Habitat’s fifth annual Give Back Day," the release said.

According to the nonprofit, more than a million residents are food insecure in Tampa Bay’s 10-county region. Habitat said 1 in 6 are adults, and 1 in 4 are children. Feeding Tampa Bay is currently serving up to 2 million meals a week, with 68% of those served having never been in a food line before. The nonprofit is projecting that it will serve 85 million meals this year alone