WASHINGTON - An influential panel of outside advisers to the U.S. Food and Drug Administration met Tuesday and endorsed an experimental drug by Merck that could soon become the first U.S.-authorized pill for patients to take at home to treat COVID-19.

The FDA’s Antimicrobial Drugs Advisory Committee is made up of academics and other experts reviewing its safety and effectiveness. The FDA asked its outside advisers whether the agency should authorize the pill, weighing new information that it is less effective than first reported and may cause birth defects.

The meeting came as U.S. infections are rising again and health authorities worldwide size up the threat posed by the new omicron variant.

All COVID-19 drugs currently authorized by the FDA require an injection or IV, which limits their use. Merck asked the FDA to authorize the drug, known as molnupiravir, in October. If approved, Merck’s coronavirus antiviral would be the first that patients could take at home to ease symptoms and speed recovery.

The meeting marked the first time regulators have publicly reviewed a new drug for COVID-19, reflecting the intense interest and scrutiny of the pill.

It’s already authorized for emergency use in the U.K., licensed for adults 18 and older who have tested positive for COVID-19 and have at least one risk factor for developing severe disease. The drug is intended to be taken twice a day for five days by people at home with mild to moderate COVID-19.

An antiviral pill that people could take at home to reduce their symptoms could prove groundbreaking, easing the crushing caseload on U.S. hospitals and helping to curb outbreaks in poorer countries with weak health care systems. It would also bolster the two-pronged approach to the pandemic: treatment, by way of medication, and prevention, primarily through vaccinations.

The pill has been shown to significantly cut the rate of hospitalizations and deaths among people with mild-to-moderate coronavirus infections. Merck’s drug uses a novel approach to fight COVID-19: it inserts tiny mutations into the coronavirus’ genetic code to stop the virus from reproducing.

Given the ongoing threat, the FDA is widely expected to approve emergency use of Merck’s pill. But new data released last week painted a less compelling picture than when the company first publicized its early results in October. 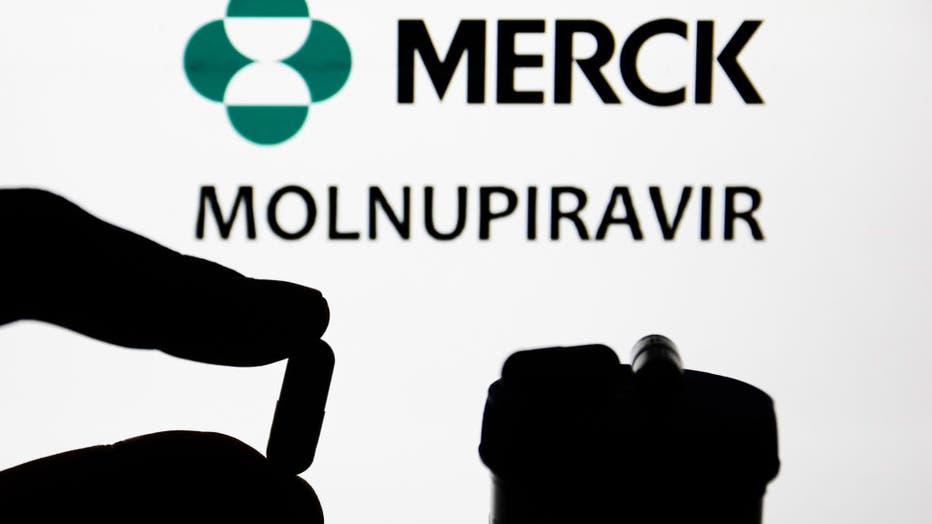 FILE - A medicine pill is seen with Merck logo and the word 'molnupiravir' displayed on a screen in the background in this illustration photo taken on Nov. 5, 2021. (Photo by Jakub Porzycki/NurPhoto via Getty Images)

Last week, Merck said the final study results showed molnupiravir reduced hospitalization and death by 30% among adults infected with the coronavirus when compared with adults taking a placebo. That effect was significantly less than the 50% reduction it first announced based on incomplete results.

FDA scientists said Tuesday the reasons for the difference were unclear but appeared to be due to higher-than-expected hospitalizations among patients taking the drug during the second half of the study. Molnupiravir’s effectiveness is a key consideration as panel members weigh whether to recommend the drug and for whom.

Another question is whether pregnant women or women of child-bearing age should avoid the drug.

FDA scientists said Tuesday that company studies in rats showed the drug caused toxicity and birth defects in the skeleton, eyes and kidneys. Taken together, FDA staffers concluded the data "suggest that molnupiravir may cause fetal harm when administered to pregnant individuals."

Regulators said they are considering barring molnupiravir’s use during pregnancy or warning against it but leaving it as an option in rare cases. The FDA also proposed that doctors verify patients are not pregnant before starting treatment and recommend contraceptives to certain patients.

In its own presentations Tuesday, Merck said it is not recommending the drug be used in women who are pregnant or lactating. But the drugmaker opposed a blanket restriction on prescribing to those patients, arguing there may be certain cases where the drug’s benefit outweighs its risk.

The drug uses a novel approach to fight COVID-19: It inserts tiny errors into the coronavirus’ genetic code to stop it from reproducing. That genetic effect has raised concerns that the drug could spur more virulent strains of the virus. But FDA regulators said Tuesday that risk is theoretical and seems unlikely.

Merck scientists said they believe their drug will be effective against the new omicron variant. They said the drug worked against other variants, including the prevailing delta strain.

Panelists are also weighing whether the pills should be offered to patients who have been vaccinated or previously had COVID-19. Merck didn’t study the drug in vaccinated people, but data from a handful of patients with prior infections suggested it had little benefit. Still, it may be impractical for doctors to screen out those patients. The Merck drug works best when given within five days of first COVID-19 symptoms, underscoring the need for speedy treatment.

Merck tested the drug in adults with mild-to-moderate COVID-19 who were considered higher risk due to health problems like obesity, diabetes or heart disease. That’s the same group that currently receives antibody drugs, which help the immune system fight the virus. The FDA has authorized three antibody drugs for COVID-19 but all have to given by IV or injection at hospitals or clinics.

While Merck’s drug is likely to be the first pill for coronavirus in the U.S., more are expected to follow. Rival drugmaker Pfizer has submitted its own antiviral for FDA review after initial study results showed it cut the combined rate of hospitalization and death by nearly 90%.

Pfizer’s drug is part of a decades-old family of antiviral pills known as protease inhibitors, which revolutionized the treatment of HIV and hepatitis C. They work differently than Merck’s pill and haven’t been linked to the kind of mutation concerns that have been raised with Merck’s drug.

In an effort to expand access to such drugs in poorer countries, Merck also agreed to allow other drugmakers to produce its COVID-19 pill. The Medicines Patent Pool, a United Nations-backed public health organization, announced in October that it signed a voluntary licensing agreement for molnupiravir with Merck and its partner Ridgeback Biotherapeutics.

The agreement will allow the Medicines Patent Pool to grant further licenses to qualified companies who are approved to make the drug. Neither drug maker will receive royalties under the agreement for as long as the World Health Organization deems COVID-19 to be a global emergency.