Microsoft is paying nearly $70 billion for Activision Blizzard, the maker of Candy Crush and Call of Duty, to boost its competitiveness in mobile gaming and virtual-reality technology.

The all-cash $68.7 billion deal will turn Microsoft, maker of the Xbox gaming system, into one of the world's largest video game companies. It will also help it compete with tech rivals such as Meta, formerly Facebook, in creating immersive virtual worlds for both work and play.

If the deal survives scrutiny from U.S. and European regulators in the coming months, it also could be one of the biggest tech acquisitions in history. Dell bought data-storage company EMC in 2016 for around $60 billion.

Activision has been buffeted for months by allegations of misconduct and unequal pay. That was addressed Tuesday by Microsoft CEO Satya Nadella in a conference call with investors.

"The culture of our organization is my No. 1 priority," Nadella said, adding that "it’s critical for Activision Blizzard to drive forward on its" commitments to improve its workplace culture. 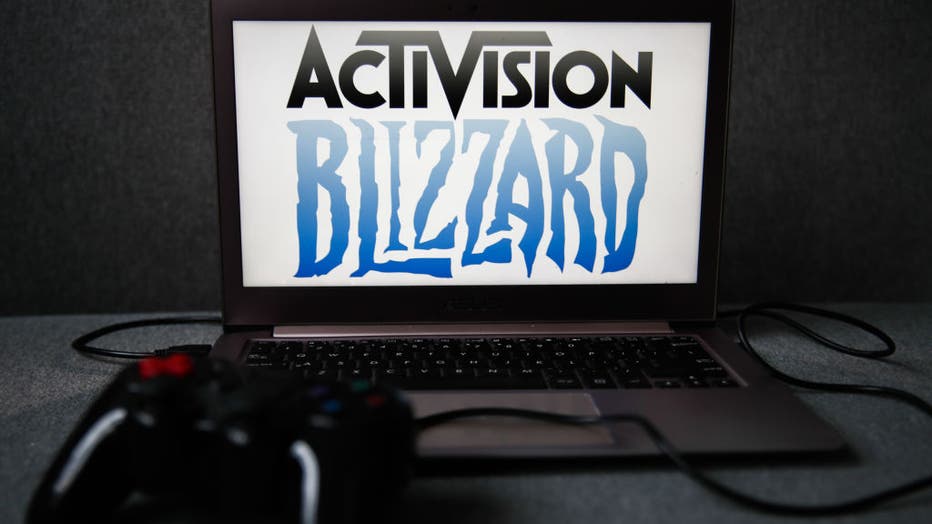 FILE - Activision Blizzard logo displayed on a laptop screen and a gamepad are seen in this illustration photo taken in Krakow, Poland on Sept. 21, 2021. (Photo by Jakub Porzycki/NurPhoto via Getty Images)

Activision disclosed last year it was being investigated by the Securities and Exchange Commission over complaints of workplace discrimination and in September settled claims brought by U.S. workforce discrimination regulators. California's civil rights agency sued the Santa Monica-based company in July, citing a "frat boy" culture that had become a "breeding ground for harassment and discrimination against women."

Activision's longtime CEO Bobby Kotick will retain his role. Microsoft said he and his team will maintain their focus on driving efforts to further strengthen the company’s culture and accelerate business growth.

Wall Street saw the acquisition as a big win for Activision Blizzard Inc. and its shares soared 25% in afternoon trading Tuesday, making up for losses over the past six months since California's discrimination lawsuit was filed. Shares of Microsoft slipped about 2%.

The Redmond, Washington, tech giant said the latest acquisitions will help beef up its Xbox Game Pass game subscription service while also accelerating its ambitions for the metaverse, a collection of virtual worlds envisioned as a next generation of the internet.

The acquisition also would push Microsoft past Nintendo as the third-largest video game company by global revenue, behind Playstation-maker Sony and Chinese tech giant Tencent, according to Wedbush Securities analyst Daniel Ives.

"Microsoft needed to do an aggressive deal given their streaming ambitions and metaverse strategy," Ives said. "They’re the only game in town that can do a deal of this size with the other tech stalwarts under massive tech scrutiny."

Meta, Google, Amazon and Apple have all attracted increasing attention from antitrust regulators in the U.S. and Europe, but the Activision deal is so big that it will also likely put Microsoft into the regulatory spotlight, Ives said. Microsoft is already facing delays in its planned $16 billion acquisition of Massachusetts speech recognition company Nuance because of an investigation by British antitrust regulators.

Microsoft is able to make such a big all-cash purchase of Activision because of its success as a cloud computing provider. But after years of focusing on shoring up its business clients and products such as the Office suite of email and other work tools, Ives said Microsoft's failed 2020 attempt to acquire social media platform TikTok may have "really whet the appetite for Nadella to do a big consumer acquisition."

Pushback against the deal was immediate from consumer advocacy groups.

"No way should the Federal Trade Commission and the U.S. Department of Justice permit this merger to proceed," said a statement from Alex Harman, competition policy advocate for Public Citizen. "If Microsoft wants to bet on the ‘metaverse,’ it should invest in new technology, not swallow up a competitor."

White House press secretary Jen Psaki had no comment on Microsoft's announcement at her briefing Tuesday, but emphasized the Biden administration's recent moves to strengthen enforcement against illegal and anticompetitive mergers.

Started in 1979 by former Atari Inc. employees, Activision has created or acquired many of the most popular video games, from Pitfall in the 1980s to Guitar Hero and the World of Warcraft franchise. Kotick, 59, has been CEO since 1991.

Microsoft said it expects the deal to close in its 2023 fiscal year, which starts in July. The Activision business unit would then report to Phil Spencer, who has led Microsoft's Xbox division and will now serve as CEO of Microsoft Gaming.

Kotick survived a number of executive shakeups at Activision last year after a series of controversies stemming from allegations of a toxic workplace culture. A shareholder lawsuit in August said the company failed to disclose to investors that it was being investigated in California and that it had workplace culture issues that could result in legal problems.

Activision reached a deal in September with the U.S. Equal Employment Opportunity Commission to settle claims that followed a nearly three-year investigation. The agency said Activision failed to take effective action after employees complained about sexual harassment, discriminated against pregnant employees and retaliated against employees who spoke out, including by firing them.

Microsoft has also been investigating its own practices toward sexual harassment and gender discrimination, opening an inquiry last week sought by investors at its annual shareholders meeting in November. The company committed to publishing a report later this year on how it handles harassment claims, including past allegations involving senior leaders such as co-founder Bill Gates.

AP writer Darlene Superville in Washington contributed to this report.