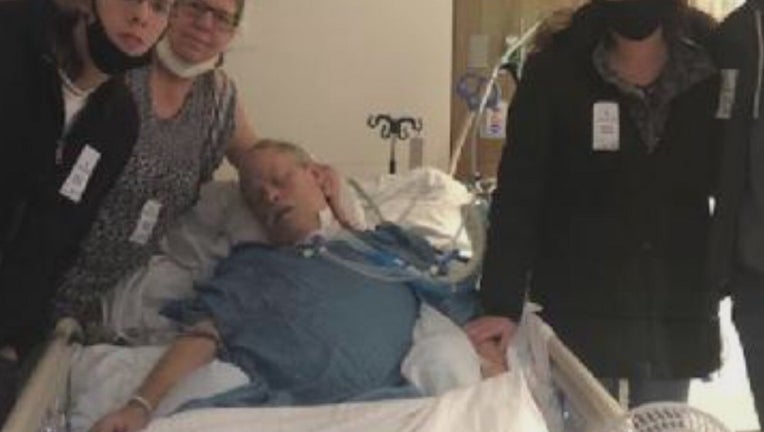 (FOX 9) - A Buffalo, Minnesota man suffering from a devastating case of COVID-19 is in Texas where his family is hoping and praying doctors there can save his life.

Scott Quiner’s family went to court last week to get a restraining order to keep Allina Health from pulling the plug on the ventilator that was keeping him alive in Minnesota.

A man battling COVID-19 has been moved to a Texas facility for new treatment, after his family sued to block a Minnesota hospital from removing him from a ventilator.

FOX 9 does not have all the specifics of Quiner’s medical records, but his loved ones and their attorney report the 55-year old father of three was unvaccinated when he was first diagnosed with COVID-19 in late October, around Halloween.

He required deep sedation, a breathing tube, and a ventilator when his oxygen levels got dangerously low and did not improve.

Scott’s wife, Anne Quiner claims Allina threatened to pull the plug on that ventilator last week and that is when she went to court to fight.

Anne has power of attorney over Scott’s healthcare decisions. She hired lawyer Marjorie Holsten to stop Allina from pulling the plug on the ventilator, a move she believes would have killed him.

"This is a life-saving thing. It is going to be critical," explained Holsten, who admits she has never handled a case like this one.

The Quiners have stated in public comments and social media that Allina would not treat Scott with certain drugs, nor would they attempt other extraordinary measures that might save his life. When the medical team allegedly told the family that Scott had just a couple more days on the ventilator, Holsten rushed to court to obtain the restraining order. The judge signed it Thursday.

"It was mentioned on Monday, confirmed on Tuesday," said Holsten. "By Tuesday, they said, ok, Thursday at noon, we pull the plug. I don’t think the judge wanted to be on the wrong side of saying, ‘Of course, you should be able to pull the plug’ so the judge was correct doing that."

Over the weekend, Scott was transferred on a med flight to an unidentified hospital in Texas, apparently willing to meet the family’s medical wishes for life-saving treatments. By Sunday evening, he was already said to be improving on the ventilator while being weaned from the heavy sedatives, and provided extra nutrients.

His family claims that it appears most of his major organs are functioning well, except his lungs.

"I think the world is watching what is going on with Scott," Holsten told FOX 9’s Paul Blume. "And as he gets better and better, we are going to see that you know what, there are protocols that should be used that hospitals have not been using. And I am hoping that changes are going to be made as a result of this case."

Allina would not discuss specifics of Quiner’s medical condition and case history, but provided FOX 9 with a brief written statement that read in part: "Allina Health is grateful the family was able to find a health care facility that meets their needs and we continue to wish them all the best."

Meantime, the Quiners have raised tens of thousands of dollars for Scott’s emergency, life-saving care through a pair of online fundraisers in recent days, boosted by significant online coverage of his case.

UPDATE: Scott Quiner died at 55 in a Texas hospital the morning of Saturday, Jan. 22, the family's attorney confirmed with FOX 9.