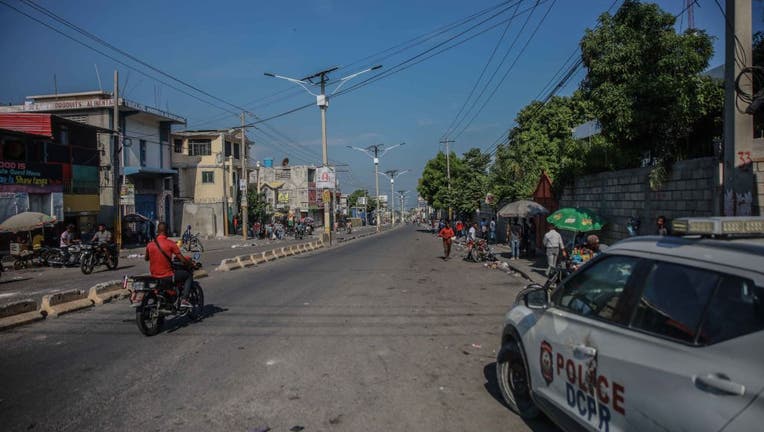 People ride a motorcycle past a police car following a call for a general strike launched by several professional associations and companies to denounce insecurity in Port-au-Prince on Oct. 18, 2021. (Photo by RICHARD PIERRIN/AFP via Getty Images)

Captive missionaries in Haiti found freedom last week by making a daring overnight escape, eluding their kidnappers and walking for miles over difficult, moonlit terrain with an infant and other children in tow, according to the agency they work for, officials said Monday.

The group of 12 navigated by stars to reach safety after a two-month kidnapping ordeal, officials with the Christian Aid Ministries, the Ohio-based agency that the captive missionaries work for, said Monday at a press conference.

The detailed accounting of their journey to safety comes after news Thursday that the missionaries were free.

A total of 17 people from the missionary group — 12 adults and five minors — were abducted Oct. 16 shortly after visiting an orphanage in Ganthier, in the Croix-des-Bouquets area, where they verified it had received aid from CAM and played with the children, CAM has said. The group included 16 Americans and one Canadian.

RELATED: Remaining missionaries kidnapped in Haiti have been freed

Their captors from the 400 Mawozo gang initially demanded millions of dollars in ransom. Five other captives had earlier reached freedom. It is still unclear if any ransom was paid.