The history of presidential debates in the United States

Debates continue to be a significant part of the presidential election process.

WASHINGTON (AP) - A political shift is beginning to take hold across the U.S. as tens of thousands of suburban swing voters who helped fuel the Democratic Party's gains in recent years are becoming Republicans.

More than 1 million voters across 43 states have switched to the Republican Party over the last year, according to voter registration data analyzed by The Associated Press. The previously unreported number reflects a phenomenon that is playing out in virtually every region of the country — Democratic and Republican states along with cities and small towns — in the period since President Joe Biden replaced former President Donald Trump.

But nowhere is the shift more pronounced — and dangerous for Democrats — than in the suburbs, where well-educated swing voters who turned against Trump's Republican Party in recent years appear to be swinging back. Over the last year, far more people are switching to the GOP across suburban counties from Denver to Atlanta and Pittsburgh and Cleveland. Republicans also gained ground in counties around medium-size cities such as Harrisburg, Pennsylvania; Raleigh, North Carolina; Augusta, Georgia; and Des Moines, Iowa.

Ben Smith, who lives in suburban Larimer County, Colorado, north of Denver, said he reluctantly registered as a Republican earlier in the year after becoming increasingly concerned about the Democrats' support in some localities for mandatory COVID-19 vaccines, the party's inability to quell violent crime and its frequent focus on racial justice.

"It’s more so a rejection of the left than embracing the right," said Smith, a 37-year-old professional counselor whose transition away from the Democratic Party began five or six years ago when he registered as a libertarian. 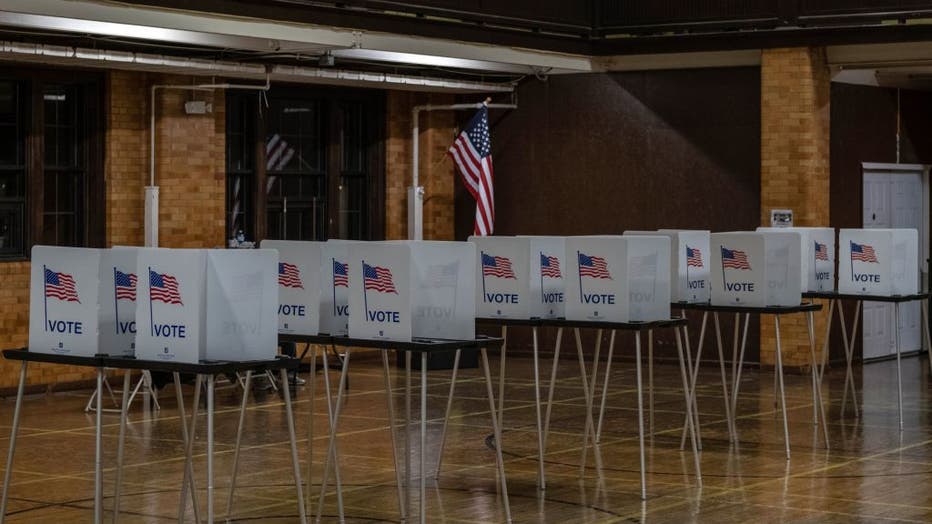 The AP examined nearly 1.7 million voters who had likely switched affiliations across 42 states for which there is data over the last 12 months, according to L2, a political data firm. L2 uses a combination of state voter records and statistical modeling to determine party affiliation. While party switching is not uncommon, the data shows a definite reversal from the period while Trump was in office, when Democrats enjoyed a slight edge in the number of party switchers nationwide.

But over the last year, roughly two-thirds of the 1.7 million voters who changed their party affiliation shifted to the Republican Party. In all, more than 1 million people became Republicans compared to about 630,000 who became Democrats.

The broad migration of more than 1 million voters, a small portion of the overall U.S. electorate, does not ensure widespread Republican success in the November midterm elections, which will determine control of Congress and dozens of governorships. Democrats are hoping the Supreme Court's decision on Friday to overrule Roe v. Wade will energize supporters, particularly in the suburbs, ahead of the midterms.

Still, the details about party switchers present a dire warning for Democrats who were already concerned about the macro effects shaping the political landscape this fall.

Roughly four months before Election Day, Democrats have no clear strategy to address Biden’s weak popularity and voters’ overwhelming fear that the country is headed in the wrong direction with their party in charge. And while Republicans have offered few policy solutions of their own, the GOP has been working effectively to capitalize on the Democrats' shortcomings.

"Biden and Democrats are woefully out of touch with the American people, and that’s why voters are flocking to the Republican Party in droves," RNC Chair Ronna McDaniel told the AP. She predicted that "American suburbs will trend red for cycles to come" because of "Biden’s gas hike, the open border crisis, baby formula shortage and rising crime."

The Democratic National Committee declined to comment when asked about the recent surge in voters switching to the GOP.

And while Republican officials are quick to take credit for the shift, the phenomenon gained momentum shortly after Trump left the White House. Still, the specific reason or reasons for the shift remain unclear.

At least some of the newly registered Republicans are actually Democrats who crossed over to vote against Trump-backed candidates in GOP primaries. Such voters are likely to vote Democratic again this November.

But the scope and breadth of the party switching suggests something much bigger at play.

Over the last year, nearly every state — even those without high-profile Republican primaries — moved in the same direction as voters by the thousand became Republicans. Only Virginia, which held off-year elections in 2021, saw Democrats notably trending up over the last year. But even there, Democrats were wiped out in last fall's statewide elections.

In Iowa, Democrats used to hold the advantage in party changers by a 2-to-1 margin. That’s flipped over the last year, with Republicans ahead by a similar amount. The same dramatic shift is playing out in Ohio.

The current advantage for Republicans among party changers is playing out with particular ferocity in the nation's suburbs.

The AP found that the Republican advantage was larger in suburban "fringe" counties, based on classifications from the Centers for Disease Control and Prevention, compared to smaller towns and counties. Republicans boosted their share of party changers in 168 of 235 suburban counties AP examined — 72 percent — over the last year, compared with the last years of the Trump era.

Republicans also gained ground in further-out suburban counties, which the CDC lumps in with medium-size cities and calls "medium metro" — more than 62 percent of such counties, 164 in all, saw Republican growth. They range from the suburban counties north of Denver, like Larimer, to Los Angeles-area ones like Ventura and Santa Barbara in California.

The Republican advantage was nearly universal, but it was stronger in some places than others.

For example, in Lorain County, Ohio, just outside Cleveland, nearly every party switcher over the last year has gone Republican. That's even as Democrats captured three-quarters of those changing parties in the same county during end of the Trump era.

Some conservative leaders worry that the GOP's suburban gains will be limited if Republicans don't do a better job explaining to suburban voters what they stand for — instead of what they stand against.

Emily Seidel, who leads the Koch-backed grassroots organization Americans for Prosperity, said her network is seeing first-hand that suburban voters are distancing themselves from Democrats who represent "extreme policy positions."

"But that doesn’t mean that they’re ready to vote against those lawmakers either. Frankly, they’re skeptical of both options that they have," Seidel said. "The lesson here: Candidates have to make their case, they have to give voters something to be for, not just something to be against."

Back in Larimer County, Colorado, 39-year-old homemaker Jessica Kroells says she can no longer vote for Democrats, despite being a reliable Democratic voter up until 2016.

There was not a single "aha moment" that convinced her to switch, but by 2020, she said the Democratic Party had "left me behind."

"The party itself in no longer Democrat, it's progressive socialism," she said, specifically condemning Biden's plan to eliminate billions of dollars in student debt.