Woman nearly dies from COVID after not wanting to get vaccine

TAMPA, Fla. - A Florida woman who was hesitant about getting a COVID-19 vaccine is urging others to learn from her mistake after the virus nearly killed her.

Ganeene Starling, a mother of eight children, said she was worried about possible unknown side effects of the vaccine, so she had no intention of getting one. She now has some newfound clarity.

"You also have to think about the long-term effects of what COVID could do and you might not be as lucky as I was. You might die," Starling told FOX 13 Monday.

Starling's husband was the first to come down with COVID-19 earlier this month. Eventually, it spread through the whole family, including four of their children who still live at home.

Ganeene came down with the worst case and ended up in the hospital near their home in Lake George. On July 9, she posted to Facebook a video she recorded while lying in her hospital bed, hooked up to an oxygen machine. 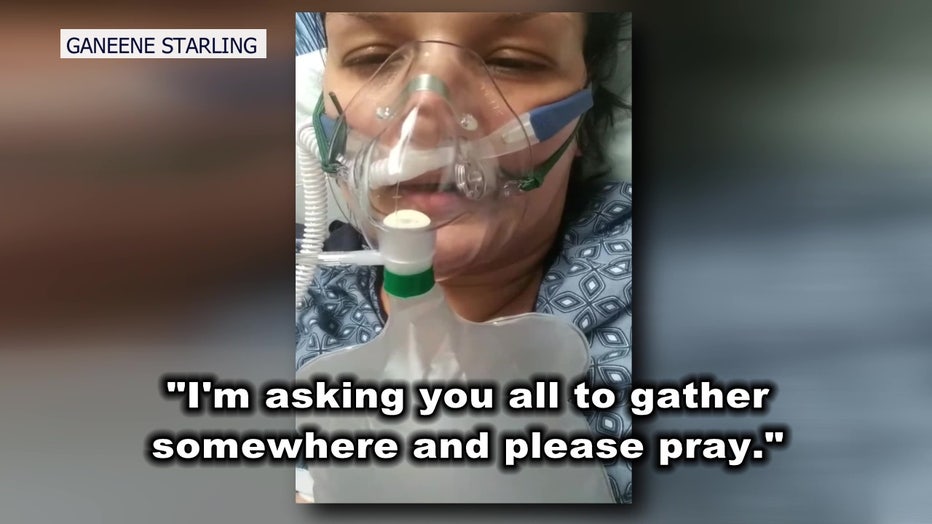 Ganeene Starling pleaded for prayers as she battled COVID-19

"I'm asking you all to gather somewhere and please pray," she pleaded.

"It was a terrible feeling because, when you're in the hospital with COVID, you're all alone. You're not allowed to have anyone with you," she said. "I remember laying on the bed just like, 'I'm fixing to die here by myself. My husband is not going to be here, my children, my sister, and my brother. I'm just going to be alone.' And it's a terrible feeling to know that you're probably going to die by yourself."

More than two weeks later, she's still on oxygen and probably will be for a few more months. Doctors have warned her that she might also be susceptible to blood clots.

Ganeene has a new lease on life and a message for others who are unvaccinated.

"I'm telling you, I was so against this vaccine and I'm begging people to get it now," she said.

Bay Area experts believe this will be the final wave of the pandemic because, after this spike, we should hit herd immunity because the majority of people will have either been vaccinated – or infected.

That's a message many, including Dr. Thomas Unnasch with USF Health, hope other unvaccinated people take seriously, as the virus' delta variant surges through the country, especially Florida.

Unnasch believes the state will likely get to herd immunity by September, which he said is now 80-85% protected, but it'll be unnecessarily painful for a lot of people.

"It's going to be reaching herd immunity the hard way rather than the easy way. The easy way would have been through vaccination," he told FOX 13. "We're probably going to equal or pass the peak that we saw back in January, which was the worst that we'd seen."

Ganeene, who still struggles to breathe at times, wishes she got the vaccine a long time ago and now plans to use every bit of air she can spare to urge others to do so.

"Who knows what type of damage this is going to leave my body in and the vaccine could have prevented that?" she said.

Unnasch, meanwhile, believes everyone should be wearing masks indoors, even those who are vaccinated because he said it appears even vaccinated people can spread the much-more infectious Delta variant.