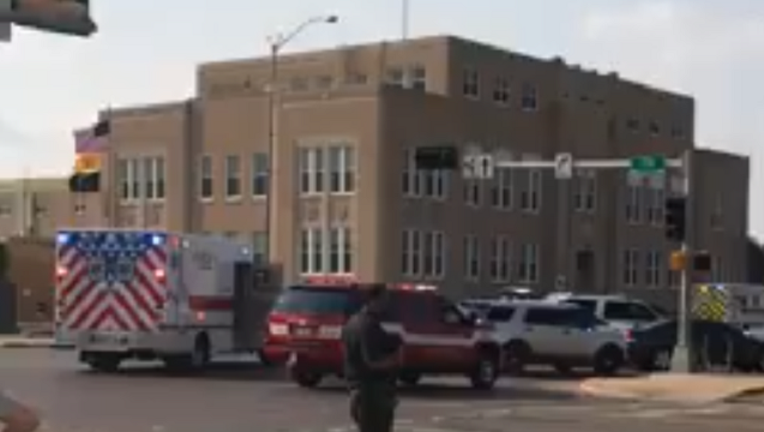 CLOVIS, N.M. (AP) - Two people were killed and four others were injured when gunfire erupted inside a public library on Monday, throwing an eastern New Mexico community into a panic as officers swarmed the building with their guns drawn.

The gunman surrendered and was taken into custody without incident after police entered the downtown building, authorities and elected officials with the city of Clovis said during a news conference.

Warrants for his arrest were being prepared, but it's wasn't immediately clear what charges he would face.

Clovis Mayor David Lansford said things could have been much worse had it not been for the quick response, training and courage of police. He called the shooting tragic and senseless.

"This is a big blow to our community," he said. "Our community is a community that places a high value on life and the sanctity of life. And each life that lives in this community is precious. So we're all hurting right now as a result of what took place this afternoon."

Clovis, a city of about 40,000, is about 200 miles east of Albuquerque, near the Texas state line. The area is home to Cannon Air Force Base. The nearby community of Portales is home to Eastern New Mexico University.

The injured included two men and two women, authorities said. Some were taken to a hospital across the state line in Lubbock, Texas. The extent of their injuries was not immediately known.

One woman was seen being helped into an ambulance while a call for air ambulances could be heard over police radio traffic.

The names of the victims and the gunman were not released.

Police said they were still working to process the crime scene and piece together what happened. Police Chief Douglas Ford could not immediately say what kind of gun was used in the attack.

Top elected officials from across New Mexico issued their condolences for the victims and their support for the community. Gov. Susana Martinez called it a "horrific attack."

"In the coming hours and days we will learn more information about this despicable act, but for now I ask all New Mexicans to pray for the victims and their families, and for the entire Clovis community," said Martinez, a former prosecutor.

Attorney General Hector Balderas said his office has reached out to the local district attorney to offer its help.

Sojung Her, a 26-year-old cashier at the Shogun Japanese Steakhouse within view of the library lawn, said the shooting left behind a sense of fear and vulnerability.

"It's kind of a freak thing," she said. "What if he just walked into our restaurant and started shooting?"

Police cars and tactical officers crowded the streets outside as she arrived to work at the restaurant late Monday afternoon.

"This kind of thing never happens here," she said.

Vanessa Aguirre told The Eastern New Mexico News that she was in the library with her son when a man came in and started to shoot into the air.