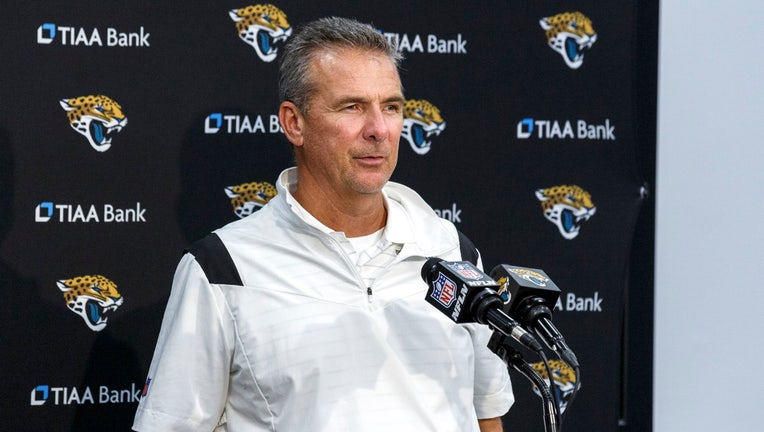 Head Coach Urban Meyer of the Jacksonville Jaguars addresses the media during the post game press conference after a preseason game against the Cleveland Browns at TIAA Bank Field on August 14, 2021 in Jacksonville, Florida. The Browns defeated the J

NFLPA spokesman George Atallah confirmed the union's action in an email to The Associated Press on Tuesday night, hours after Meyer told reporters: "Everyone was considered. That was part of the production, let’s start talking about this and also, ‘Is he vaccinated or not?’ Can I say that that was a decision-maker? It was certainly in consideration."

The Jaguars attempted to clarify Meyer's comments Wednesday with a statement.

"Availability is one of the many factors taken into account when making roster decisions," the team said. "We have vaccinated and unvaccinated players on our roster, and no player was released because of their vaccination status.

"Ultimately, decisions are based on a player’s ability to help the Jaguars win. We educate our players and respect personal decisions as it pertains to the vaccine. We want to keep our players, staff and families safe as we comply with protocols related to both health and safety and competition on game days."

Meyer pointed to defensive end Josh Allen missing one week because of protocols. Allen, who is not vaccinated, was activated from the COVID-19 list Monday.

The Patriots released Cam Newton, the 2015 NFL MVP, in a surprise move to pave the way for rookie quarterback Mac Jones. Newton is not vaccinated and missed practice last week due to the protocols.

Philadelphia Eagles general manager Howie Roseman raised his eyebrows when asked about Meyer's comments and if the team made similar decisions.

"We cut the roster based on the 53 best guys that we thought could help our football team," Roseman said. "And then going forward, when we look at guys, we’re going to look at them based on their ability, how they fit our system, what their background is, to make sure we’re bringing in the right people into this building. That’s really how all our discussions have been about."