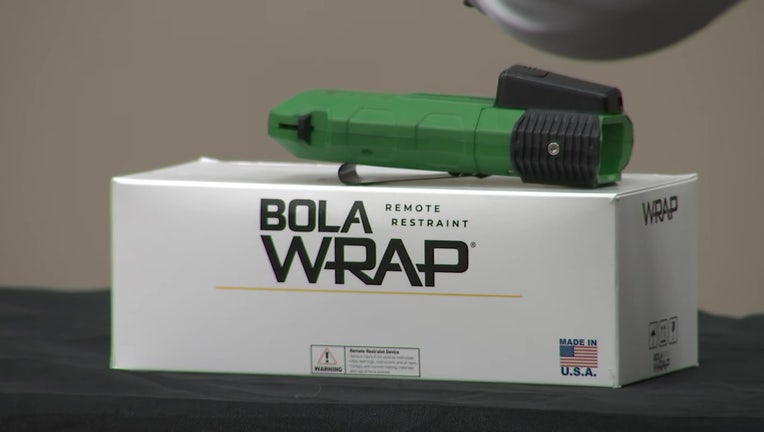 TAMPA, Fla. - Hillsborough County deputies will deploy a new, non-lethal tool aimed at quickly de-escalating dangerous situations. It's called the "BolaWrap," and the sheriff himself compared it to something out of a superhero movie.

Essentially, it shoots out a kevlar tether that wraps around the person, allowing deputies to restrain a person while still keeping a safe distance. Sheriff Chad Chronister said the agency has been testing the BolaWrap since April.

"It's almost something out of a Spider-Man movie," he described during Tuesday's press conference, "how the tether comes out with hooks and quickly wraps around the individual's legs and is able to subdue that subject, maybe prevent that person…maybe harming themselves or putting that deputy in harm."

"How about somebody who wants to walk out into traffic?" he added. "The scenarios, I think, are limitless that this resource will be helpful."

Now, the agency will deploy about 165 of them to deputes in the field, he said during a press conference Tuesday, where body camera footage showed examples of the BolaWrap in action. The tool can be seen launching at an individual and wrapping around them. It can be deployed up to 25 feet away and there is an laser that helps a deputy aim for the lower torso.

Chronister said it gave deputies the option to subdue a non-compliant person without getting into a physical altercation. He said it won't replace other non-lethal options. In some cases, it may be used in conjunction with other tools like the Taser.

READ: Riverview boy adopted by HCSO detective after surviving being stabbed, set on fire by father

Bottom line, Chronister said it's smarter policing, making it safer for everyone involved: the community, suspects and deputies.

"Our goal is to de-escalate a situation and avoid any type of physical confrontation," he explained. "This resource, this less lethal resource, now affords our deputies the ability to do just that with those subjects that may be suffering from autism, maybe some type of mental health crisis. These individuals aren't individuals who need to be arrested. These are individuals who need help."

"This tool will allow us to do that," the sheriff continued, "by deploying this without anyone getting hurt."