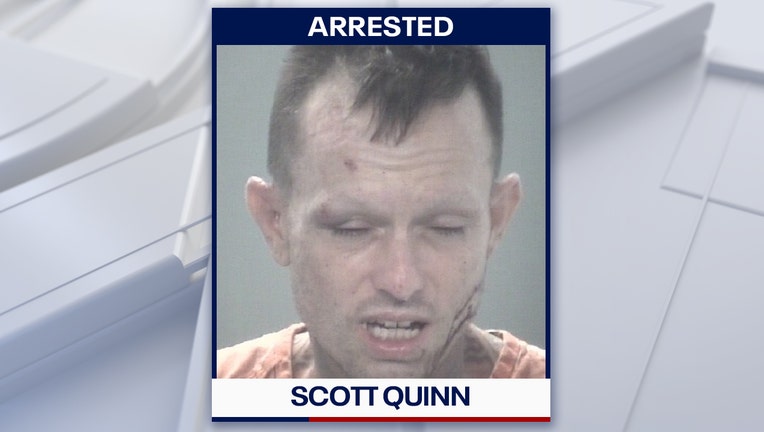 NEW PORT RICHEY, Fla. - The Pasco County Sheriff’s Office has arrested a man connected to the disappearance of Alyssa Ciccarelli, who investigators now believe is dead.

According to PCSO, Ciccarelli left the Holiday Hotel on April 17 and met Scott Quinn, 39, for a drug deal. Detectives say Quinn told them he saw Ciccarelli at Embassy Food and Gas in Port Richey on April 17, but the two parted ways afterward. Ciccarelli was reported missing on April 23.

Detectives say they searched an area of Cherry Creek Ln. in Port Richey on May 10 after locating items that were believed to belong to Ciccarelli. This area is also close to where deputies say Quinn was staying around April 17, but PCSO says nothing significant was found during the search.

Detectives say they spoke with Quinn again on May 10 and 11. That’s when they say Quinn told them that he and Ciccarelli used fentanyl together in the woods near the Cherry Creek Ln. area on April 17 and stated that Ciccarelli "nodded out."

Quinn told detectives that he then stole many of Ciccarelli’s belongings and left the area. According to PCSO, Quinn returned to the area in the early morning hours of April 18 and found Ciccarelli dead, but he did not try to get help or call authorities.

Instead, detectives say he claimed to put Ciccarelli inside a nearby dumpster and tossed more of her belongings.

PREVIOUS COVERAGE: Family members of a New Port Richey woman who hasn’t been seen since Easter are desperate for answers.

Deputies say Quinn also pawned some of Ciccarelli’s belongings that he stole after failing to help her.

Quinn was arrested on several charges relating to this case, including tampering with physical evidence, false verification of ownership, dealing in stolen property, giving false information to law enforcement during a missing persons Investigation and grand theft.

Quinn was already in the Land O’ Lakes Detention Center for charges unrelated to this case.

PCSO is still investigating Ciccarelli’s disappearance. Anyone with information is asked to call the Crime Tips Line at 1-800-706-2499 or report tips online at PascoSheriff.com/tips.