ST. PETERSBURG, Fla. - A popular activity in Pinellas County is being shut down. The Board of County Commissioners voted Tuesday night to ban horseback riding near the Sunshine Skyway Bridge. Officials say the hobby is damaging seagrass and causing water quality issues.

For the last six years, C Ponies has offered hour-long rides in the water and along the sandbars on the east side of the north Skyway fishing pier.

“We are very disappointed. We feel like not only have we lost it for our own business, we’ve lost it for all the horse owners who go to this beach and ride an enjoy a little piece of heaven,” said Carmen Hanson, owner of C Ponies.

Hanson’s company is listed as the number-one outdoor activity in St. Pete on Trip Advisor, with more than 2,400 reviews. All of C Ponies' 23 horses are rescues.

“We make our livelihood on the beach, and this is how we rehab our horses, this is how I pay my staff who pays their mortgage, who buys food for their children,” Hanson continued.

The problem is, where the horses are riding is an aquatic preserve. There are 41 such federally protected areas in the state, and two in Pinellas County. Experts say the horses are causing public health and water-quality issues due to manure and urine.

“Water testing has shown increases in fecal indicator measurements in the area the horses are ridden, which can lead to recreational beach closures,” said Heather Young with the Tampa Bay Regional Planning Council.

The county also presented aerial photos they say shows significant damage to the seagrasses caused by the horses.

“I’m convinced that it’s the horseback riding that’s producing the bulk of the damage we see out there,” Florida Department of Emergency Protection Aquatic Preserve manager Dr. Randy Runnels said. 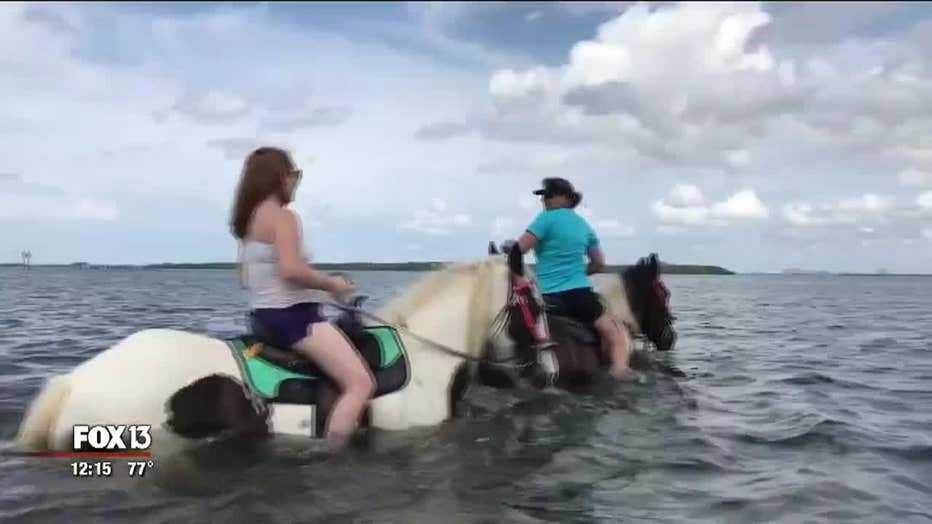 Nearly 25 people took to the mic at Tuesday’s Board of County Commissioners meeting, most of them against the ordinance on the table.

“Most of the damage to the seagrasses out there, it's boats, propeller scars, groundings, kiteboarding,” said one man.

“It seems a little comical in a way when we look at sewage spills, phosphate mines, air pollution. And we’re picking on horses,” another woman said.

No seagrass expert was on-hand to answer commissioners' questions.

There was a discussion about the ordinance being too broad and opening the door for other recreational activities to be banned at the aquatic preserve.

“We have legally met the standards to notify people that might be affected by this that really don’t know that we're talking about an ordinance that could affect them,” said Commissioner Dave Eggers.

At least one commissioner was interested in trying to find a solution that didn’t ban horseback riding altogether.

“I don’t think this is the way to do this and ban them completely, I think we can work on some kind of compromise,” Commissioner Kathleen Peters said.

In the end, there was no compromise. Peters was the only vote against the ordinance.

Hanson says she is devastated, and now has to shut down half of her business.

“We definitely feel like we were railroaded,” she said. “I’m gonna tell dog parks and kite surfers, watch out, because you’re next. With this ordinance, they can get anyone.”

Since the vote means the horses now cannot go in the water, the commission directed staff to do some digging and find out if they can ride on any county beaches.