As pipes thaw, more emergencies at homes and businesses will happen across North Texas. One Dallas woman's car was covered in ice after she parked under a pipe that burst.

DALLAS - A large contributor to the ongoing water problems is frozen and bursting water mains and pipes.

As pipes thaw this weekend, more emergencies at homes and businesses will happen across North Texas.

One Dallas woman's car was covered in ice because she parked under a pipe that later burst. Others have lost their homes or lost all access to water.

Relief organizations are ready to deploy once the roads get into better shape.

"So when I first walked out and saw it, I lost my mind," she said.

A frozen-pipe burst at Vance’s Downtown Dallas apartment parking garage leaked water all over her car. By the time she realized what happened, it was frozen.

"I’m pretty positive that the back windshield is going to break or cave in," she said. 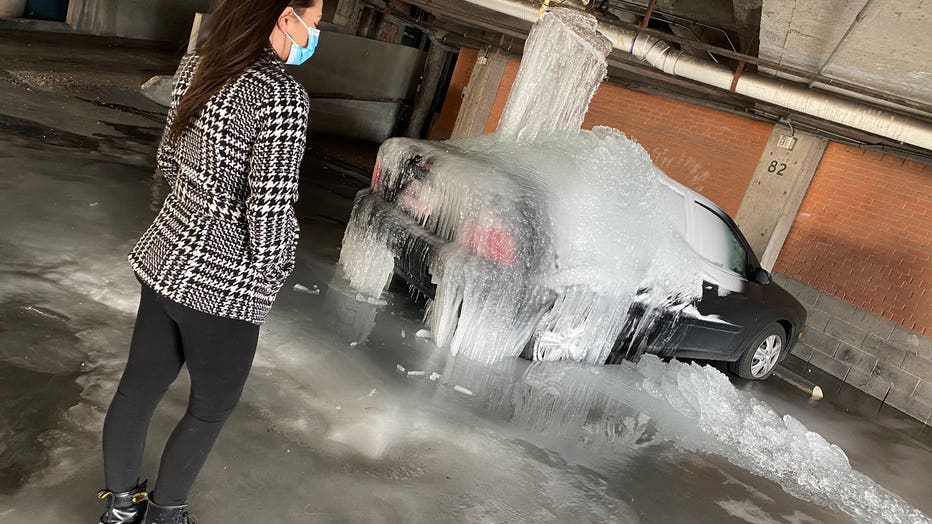 Pipes are bursting all across Texas following the once-in-a-generation winter storm. Countless of homes have been flooded.

"I don’t think I want to stay in this particular unit because it’s been damaged for three days full of water," she said.

Now, following a burst pipe, Reed’s place was flooded. Water damage means she’s having to throw away her family’s furniture.

"The kid’s bedroom sets we have to throw out," she said.

Like many others, the apartment complex is seeing all sorts of issues.

"All the water mains froze, so they can’t do laundry. They can’t take showers," said Rand Jenkins with Texas Baptist Men. "This weekend, we’re bringing down one of our laundry and shower units. And inside of that are six individual shower stalls that are cleaned by the volunteers after every use."

Some can’t wait that long. Millions have been impacted by the storms.

While Vance is sad about her car, she’s grateful it’s not inside her apartment, too, knowing so many are struggling.

"So, I’m really lucky," she said. "That this isn’t as bad as what other people are going through."