Brittney Griner is set to go on trial in Russia after allegedly being found with marijuana at the Moscow airport. The WNBA star, who has been detained since February, will be seated in a steel cage inside the courtroom, and unable to communicate with her attorneys. Legal expert Aron Solomon says the legal system in Russia is structured towards a conviction and that Griner "will 100% be found guilty" and will only be freed if the U.S. and Russia make an agreement.

MOSCOW - WNBA star Brittney Griner has finally spoken out for the first time since she was detained in Russia on charges of possessing cannabis oil while returning to play for a Russian team, in a case that has unfolded amid tense relations between Moscow and Washington.

Excerpts of a letter sent to the White House this week on behalf of Griner were obtained by FOX TV Stations Monday and contained bullet points of Griner’s thoughts as she potentially faces years behind bars.

In a letter addressed to President Joe Biden, Griner writes, "…as I sit here in a Russian prison, alone with my thoughts and without the protection of my wife, family, friends, Olympic jersey, or any accomplishments, I'm terrified I might be here forever."

"On the 4th of July, our family normally honors the service of those who fought for our freedom, including my father who is a Vietnam War Veteran. It hurts thinking about how I usually celebrate this day because freedom means something completely different to me this year," she continues. "I realize you are dealing with so much, but please don’t forget about me and the other American Detainees. Please do all you can to bring us home. I voted for the first time in 2020 and I voted for you. I believe in you. I still have so much good to do with my freedom that you can help restore. I miss my wife! I miss my family! I miss my teammates! It kills me to know they are suffering so much right now. I am grateful for whatever you can do at this moment to get me home." 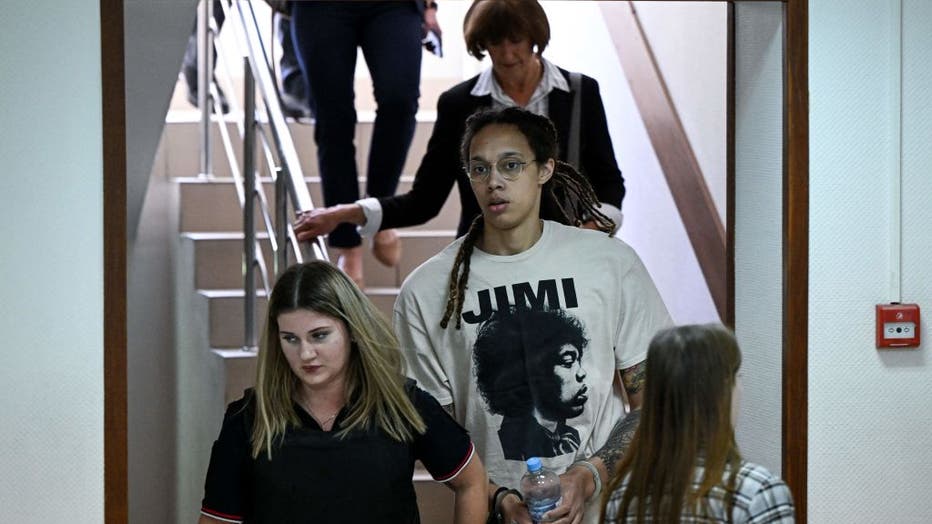 US WNBA basketball superstar Brittney Griner (C) arrives to a hearing at the Khimki Court, outside Moscow on July 1, 2022.

On July 1, Griner, 31, was escorted into the courtroom in the capital's suburb of Khimki while handcuffed, carrying a water bottle and what appeared to be a magazine, and wearing a Jimi Hendrix T-shirt.

The initial session of the trial, which was adjourned until July 7, offered the most extensive public interaction between Griner and reporters since the Phoenix Mercury center and two-time U.S. Olympic gold medalist was arrested in February at Moscow’s Sheremetyevo International Airport.

The state-owned Tass news agency quoted Griner as saying in court that she understood the charges against her. Asked by the judge if she wanted to enter a plea, Griner responded, "At this moment, no, your honor. At a later date," according to Mediazona, an independent news site known for its extensive coverage of high-profile court cases.

Police have said she was carrying vape canisters with cannabis oil when detained at the airport. She could face up to 10 years in prison if convicted of large-scale transportation of drugs.

The Associated Press contributed to this story. It was reported from Los Angeles.