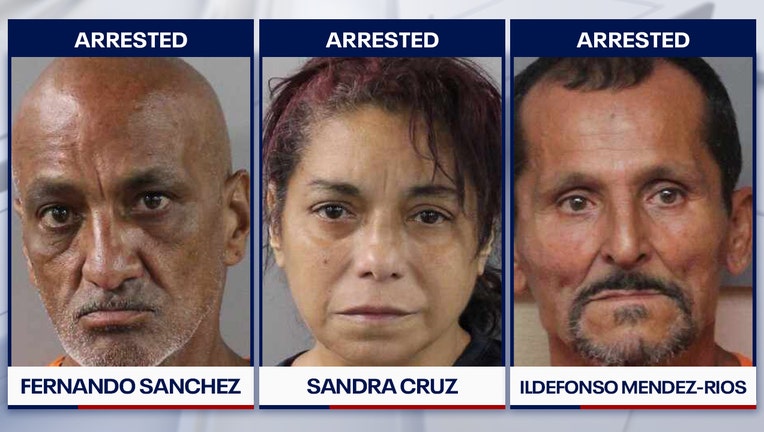 WINTER HAVEN, Fla. - A potentially lethal amount of fentanyl has been taken off the street after police received tips about drug sales taking place at a Winter Haven home.

Ildefonso Mendez-Rios, 60, Fernando Sanchez, 59, and Sandra Cruz, 52, were arrested on Wednesday when police executing a search warrant discovered a jewelry box with 15 baggies containing 2.5 grams of fentanyl inside a shed located at 439 221st St. SW. in Winter Haven.

Police say two milligrams of fentanyl can be deadly and the amount confiscated by police was enough to potentially kill 1,600 people.

According to the Winter Have Police Department, Mendez-Rios' is the only one who had access to the shed. Inside the home, officers say they found a safe belonging to him with $9,070.

Police say a bedroom belonging to Sanchez had an additional five baggies of a powdery substance that tested positive for fentanyl. Officers also say they found methamphetamine inside a cup, along with drug paraphernalia.

According to WHPD, when Cruz was searched, a pipe that tested positive for fentanyl was located inside her bra. Cruz also had an active warrant for failure to appear on a suspended driver's license charge.

"Our officers were able to take a significant amount of fentanyl off the street," said Police Chief David Brannan. "We are dedicated to continuing the search for those who are endangering the public with this lethal drug."

Mendez-Rios is facing charges of sales of fentanyl within 1,000 feet of school, childcare/park, keep shop/vehicle for drugs and possession of drug paraphernalia.

Police charged Cruz with possession of drug paraphernalia. She will also be held for her outstanding warrant.