Footage shared by Anna Mariah Heredy shows a flatbread tractor-trailer drive into the path of a train along Dover Road.

DOVER, Fla. - A Florida truck driver may be lucky to be alive after illegally rolling through a Hillsborough County railroad crossing seconds before a train came speeding through.

The close call was caught on video late Tuesday morning by another driver who had stopped properly at the intersection of Dover Road and Martin Luther King Jr. Blvd. in Dover.

Footage shared by Anna Mariah Heredy showed the flatbed tractor-trailer, driving northbound on Dover, pull across the railroad tracks even though the crossing arms were down, warning lights were flashing, and the traffic signal on MLK was red. 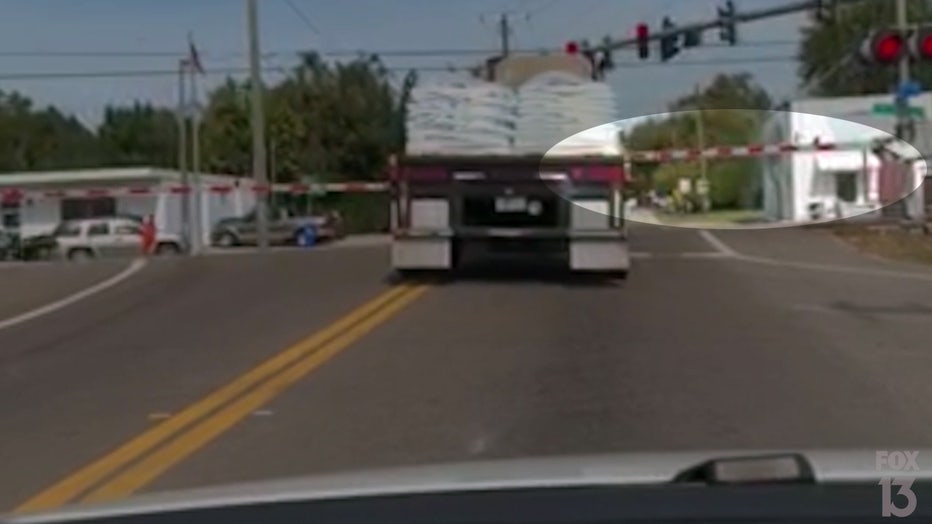 In the process, the truck drove through a crossing arm, which snapped off and fell across the tracks.

A westbound train plowed through three seconds later, blaring its horn as it barely missed the tractor-trailer.

“Oh my God,” was all Heredy could muster as she watched the scene unfold in front of her.

”If it would've been three seconds sooner there would’ve been an accident,” Heredy later told FOX 13. “I think so it’s so crazy nothing is worth your life or someone else’s life. It doesn’t matter how big of a rush you’re in.”

Heredy says the truck kept driving east on MLK. Now, railroad officials will be looking for the driver.

In a statement, CSX said they were aware of the incident and a signal maintainer had been dispatched to the crossing to assess the damage.

“Motorists should always obey signs and signals at crossings and never try to beat a train across the tracks,” a spokesperson offered. “This driver’s decision to go through the lowered gates in the video illustrates the type of risky behavior that is not only very dangerous, but also illegal. CSX Police have a copy of the video and will conduct an investigation.”