Boise police said that two people were killed and four people were injured in a shooting that took place at the Boise Towne Square shopping mall in Idaho on Monday. One of the injured was a police officer and one person is in custody at this time.

BOISE, Idaho - Police in Idaho arrested a 54-year-old woman who they said allegedly stole items from the body of a security guard killed during a Boise mall shooting.

Mary Alyce Scarbrough of Boise was charged with felony counts of alteration of evidence, malicious injury to property and grand theft, The Idaho Statesman reported Wednesday. She's being held without bail on accusations of violating her parole, as well as on a $250,000 bond on the other charges.

"The court’s very concerned about the alleged conduct in this case," said Magistrate Judge David Manweiler during a court hearing last week.

Court documents list Amy Mitchell as Scarbrough's attorney. Mitchell is also listed as an attorney with the Ada County public defender's office. That office declined to comment Wednesday when contacted by The Associated Press. 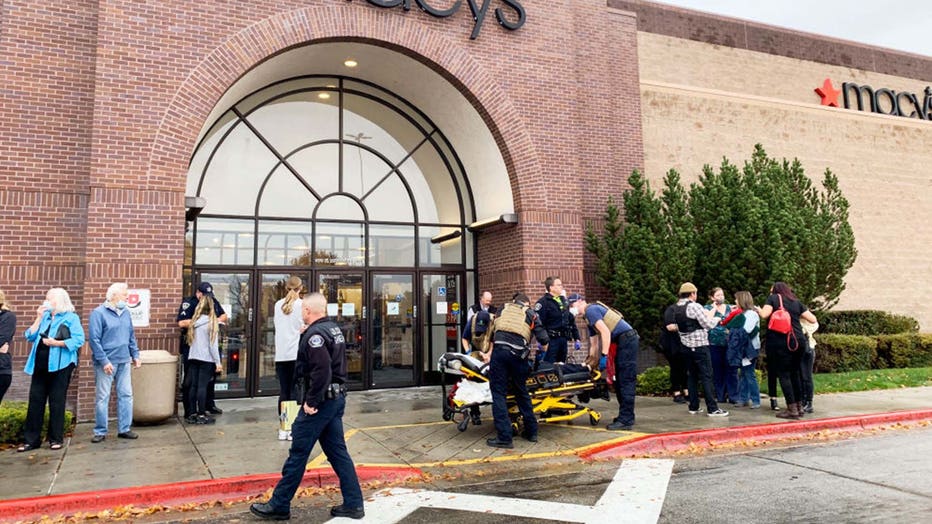 Security guard Jo Acker, 26, died in the Oct. 25 shooting at the Boise Towne Square mall. Roberto Padilla Arguelles, 49, was shopping for gifts for his family before he was killed.

Police say that minutes later they exchanged gunfire with 27-year-old suspect Jacob Bergquist, who died the next day.
Prosecutors said Scarbrough was inside the mall when the shooting began.

"The defendant approached the dying security guard at the mall," a prosecutor said during Scarbrough's court appearance. The complaint said that Scarbrough took rings, a gun belt, clothing and other property from Acker’s body.

"A woman experiencing a mental health crisis significantly altered the crime scene by removing and displacing evidence throughout the mall," Boise Police Department spokeswoman Haley Williams said in an email to the newspaper.

According to court records, Scarbrough also allegedly went into an arcade and tore off sheets of metal, kicked holes in walls and damaged other items.

Scarbrough was booked into the Ada County Jail on the day of the shooting on a misdemeanor disturbing the peace charge, and was in custody when charged with the felony counts.

She has pleaded not guilty to disturbing the peace.

Scarbrough is on probation from a felony drug case after pleading in 2019 to possession of a controlled substance.

Catherine Park contributed to this report.