As states ease restrictions previously enacted to help slow the spread of the coronavirus, health officials have warned that the threat of the virus still very much remains with a surge of new cases being reported in pockets across the U.S.

New cases have been reported in areas coast to coast. Places that were hit hardest earlier, such as New York, have improved, while infections are rising in 21 states — including Arizona, California, Florida, North Carolina, South Carolina and Texas — according to data compiled by the New York Times.

Hospitalizations have been on the rise in at least nine states since Memorial Day, according to the Washington Post — raising renewed fears of overwhelming intensive care units.

These hot spots are masked by the country’s overall case count, which early this week saw its smallest increase since March.

Florida reported 1,371 new confirmed cases of COVID-19 on June 10. With the exception of June 8, the number of new cases in the state has surpassed 1,000 each day over the past week. The state reported 1,419 new cases on June 4, its biggest single-day increase since the state began reporting daily figures in mid-March.

Florida Gov. Ron DeSantis has attributed the increase in cases to more people getting tested. But health officials suspect its likely also linked to a lack of physical distancing and face coverings following the state’s reopening in May.

It’s likely too soon to know if thousands of people at George Floyd protests have contributed to the rise, as there can be a two-week window between infection and the onset of symptoms, according to the Centers for Disease Control and Prevention.

"It's a misunderstanding that the virus is not a big deal," Dr. Manuel Gordillo, infectious disease specialist and medical director of Sarasota Memorial Hospital Infection Prevention and Control, told FOX 13 in Tampa. "It is a huge deal. The virus has not changed, has not mutated for the better or worse.“

Nine California counties this week reported a spike in new coronavirus cases or hospitalizations of confirmed cases, some from Memorial Day holiday gatherings and others from prisons and nursing homes.

Texas on June 10 reported its second consecutive day of a new high in hospitalizations — surpassing 2,000 patients for the first time since the pandemic began. 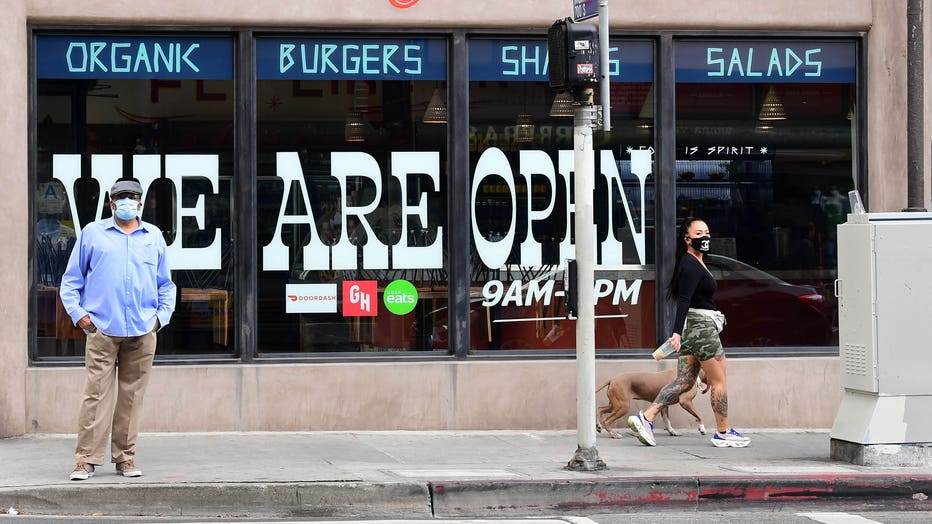 Pedestrians wear face masks in front of a restaurant in Los Angeles, California on May 12, 2020. (Photo by FREDERIC J. BROWN/AFP via Getty Images)

In Arizona, health officials sent a message of caution as the state saw a steady climb of COVID-19 cases over the past two weeks, specifically in hospital ICU cases. Banner Health, the state’s largest, most widespread health care system, said on Twitter that ventilated COVID-19 patients have quadrupled since May 15.

Cara Christ, the director of the Arizona Department of Health Services, sent hospitals a letter on June 6 urging them to activate their facility emergency plans. Christ also attributed the spike in cases to increased testing, but also to more people leaving their homes.

"The reason for the increased number of cases is not because of the increased testing," Humble told FOX 10 in Phoneix. "It’s because there’s more community spread.“

Humble said after Arizona’s stay-at-home order expired on May 15, “people’s behavior changed on a dime and went back to... pre-pandemic behavior.”

Overall, nearly 2 million people in the U.S. have been infected by the virus and more than 112,000 have died. Despite the ongoing pandemic, the White House Coronavirus Task Force has scaled back its once-daily meetings. President Donald Trump is planning to restart campaign rallies in the upcoming weeks ahead of the November presidential election.

Despite recommendations from health officials to stay at least 6 feet from others to slow the spread of COVID-19, the White House abandoned social distancing for reporters attending a recent Rose Garden event.

Dr. Anthony Fauci, the nation’s top infectious disease expert and a key member of the task force, said this week that the coronavirus crisis is far from over — which he referred to as his “worst nightmare.”

RELATED: Fauci says his meetings with Trump have 'dramatically decreased,' despite ongoing pandemic