Thomas Kennedy shouted “shame on you” at the governor and called DeSantis an “embarrassment” during the incident.

Kennedy posted about the protest on Twitter, writing: “I just interrupted a press conference in Miami-Dade to let governor @RonDeSantisFL and @MayorGimenez know they are an embarrassment to FL and that their incompetence and lack of planning has resulted in the current public health crisis. 4,381 people have died so far in FL.” 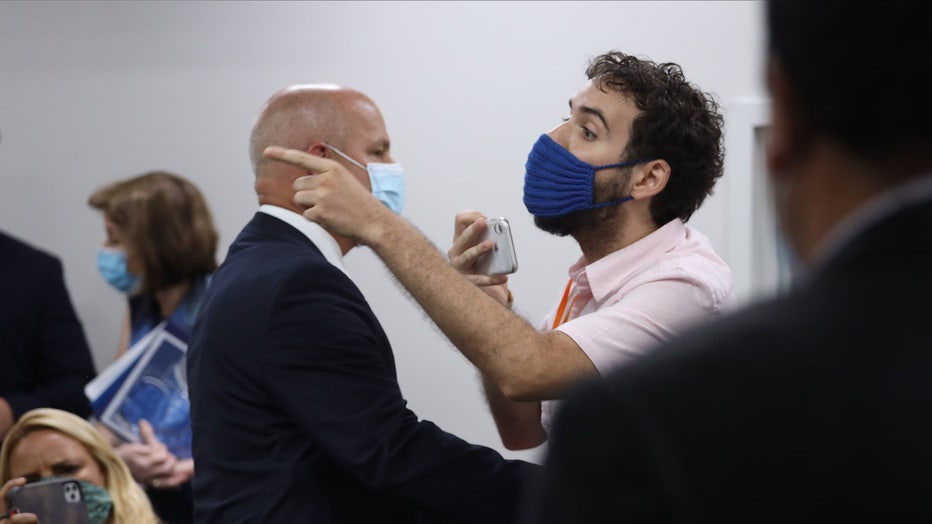 Activist Thomas Kennedy, center, is escorted out of the room after interrupting Florida Gov. Ron DeSantis' press conference regarding COVID-19 on Monday, July 13, 2020 at Jackson Memorial Hospital in Miami. He accused both the governor and Miami-Dade

When confronted by a man urging him to leave the press conference, he responds with “don’t touch me” and “social distance.”

DeSantis briefly stopped making his remarks but then continued with the press conference after the protester was escorted out.

Florida reported another 12,624 coronavirus cases on Monday bringing the statewide total to 282,435. The death toll rose to 4,277.