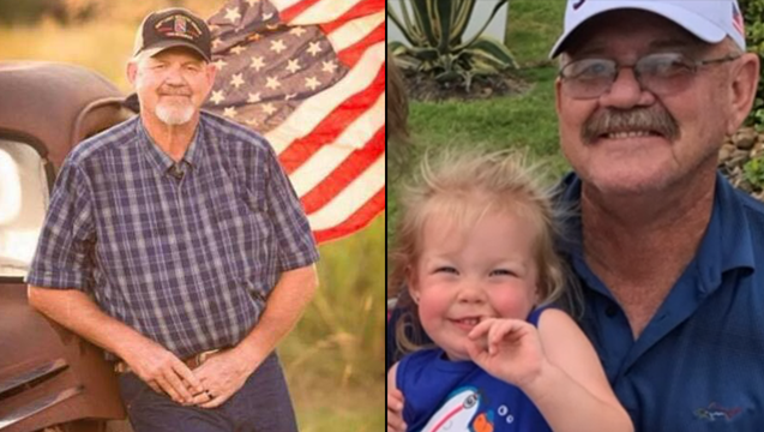 MAUD, Okla. (FOX 35 ORLANDO) - A Purple Heart recipient is being hailed a hero once again after sacrificing his own life to save his 3-year-old granddaughter from a home explosion in Oklahoma.

Don Osteen, 69, died from his injuries on Monday. According to the family, their home in Maud exploded on Sept. 19 while they were having lunch.

Osteen was standing about 15 to 30 feet away from the front door, lighting a candle next to the stove when the explosion happened.

His son, Brendon, said Osteen immediately jumped into action after seeing the roof collapse onto Brendon's daughter, 3-year-old Paetyn. The elder Osteen grabbed her from the flames and carried her a quarter of a mile up a steep driveway to safety despite his own injuries.

Osteen suffered a collapsed lung, broken ribs and burns over 70-percent of his body. Both Osteen and Paetyn were airlifted to a hospital. Paetyn suffered burns on 30-percent of her body. Osteen was placed in ICU in critical condition. On Monday, he succumbed to his injuries.

"He knew that he did his job by saving the life of his Boo Boo Chicken," Brendon wrote on Facebook. "He loved my daughter beyond unconditionally. And he gave it all for her to live. He was a great God fearing man who impacted so many people. And he will be missed dearly."

Osteen was an Army veteran and a Purple Heart recipient.

Meanwhile, little Paetyn remains in the hospital and is making progress.

“[Doctors] are saying they can’t believe the progress she’s made so fast as a toddler with her severity of burns,” Brendon wrote on Facebook on Tuesday. “This little girl is so strong and fights so hard to cooperate whenever the nurses come in messing with her. We all can only imagine how much hurt she is dealing with physically and mentally.”

A fundraiser has been set up by the family to help pay for Paetyn's ongoing medical bills.